Please Note: The images used here are from the previous DVD edition and not the Blu-Ray under review. 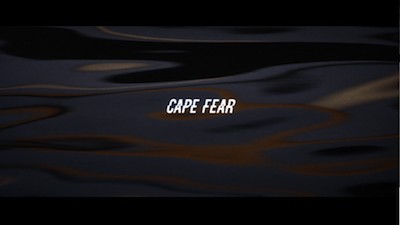 I didn't like Martin Scorsese's Cape Fear at first. As a big fan of J. Lee Thompson's 1962 original, it took some effort to even wrap my head around why a filmmaker like Scorsese would bother touching something that was so perfect the first time. The original Cape Fear, which like the remake was based on a book by John D. MacDonald, was a masterful expression of cinematic tension. Its main scares emerged from the unseen threat, from the fear of what Max Cady would do and the consequences of the things he had done when no one was looking. On the other hand, Martin Scorsese shows us every card. We don't have to imagine the effects of Cady's violence, he shows us everything as it happens. To my eye, it was less effective. Wasn't it Scorsese who taught me about the fright that lingers behind a closed door, describing how scary the exploding flour scene was in the original Cat People?

Of course, the answer to both concerns is one and the same. If Scorsese was to do a remake of Cape Fear, he was going to take it to places that Thompson didn't go. Otherwise there would be no point, it would just be a standard cover version. So, where the 1962 film was like a coiled spring waiting to jump, the 1991 adaptation was like a minefield that needed to be traversed. The springs were buried everywhere, and one wrong move would set them off.

Nick Nolte and Robert De Niro replace Gregory Peck and Robert Mitchum in the roles of Sam Bowden and Max Cady. Bowden is a lawyer who, fourteen years ago, was a public defender in Atlanta who was assigned Cady's case. Cady was a three-time rapist who had skipped out on the first two charges, and after seeing how badly the dirtbag had beat his latest victim, Bowden buried crucial evidence that might have gotten him a lighter sentence or even set him free. In the time since, Bowden has moved on to private practice at a big firm in Florida with his wife, Leigh (Jessica Lange), and fifteen-year-old daughter, Danielle (Juliette Lewis). Life for him has been good. 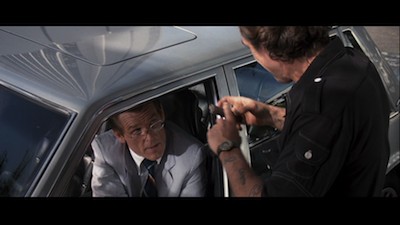 Obviously, the same cannot be said for Cady. During his extended prison stay, he has taught himself to read, learned the Bible and boned up on the legal system, buffed out his muscles, and gotten all kinds of crazy tattoos. Upon his release, he immediately seeks out Bowden, whom he believes stole all this time from him. Now Cady wants to take from Sam in equal measure. He begins showing up everywhere the Bowden family goes, dropping threats, and even carrying through on a few, killing the family dog and beating a woman (Ileana Douglas) that Bowden shares a flirtation with. His moves are calculated, designed to discredit Bowden and push the liberal lawyer to his breaking point, yet all without getting in trouble himself. If there's one thing Max Cady has learned about law enforcement, it's how slow and ineffectual it can be. If Sam Bowden wants to save himself and his family, he'll have to do it himself.

Whenever political debates turn to criminal punishment and the death sentence, the dirty pool question to toss at anyone perceived as being soft on crime is, "What if the victim was your wife or daughter?" It's a rigged hypothetical, the truth is that our legal system exists in order to take the vested interest of the individual off the table. Most people when wronged directly would want vengeance, but a court of law is meant to judge without emotion; if individuals were allowed to react based on their first, passionate response, the feuding would never end.

Max Cady's intention with Sam is to push that hypothetical into reality. He makes it clear that Sam's family members will be targets, and he instructs the lawyer to read the Book of Job as an example of the kind of retribution Max will bring down on him. At one point, Bowden even defends himself to his boss (real-life occasional politician Fred Thompson) by asking what he would do if it were his daughter. In this, Scorsese's Cape Fear reminds me of Peckinpah's Straw Dogs. The question posed is how far a man's pacifist ideals will last under a real and immediate threat. How much pushing will it take to push Sam over the edge. In both cases, sexual violence is a contributing factor, and the sense that the intellectual is less of a man due to his inability to act. In a crucial scene in Cape Fear, Leigh says this experience will show them "how strong we are, or how weak." Wesley Strick's screenplay is peppered with many such indictments. Everywhere he turns, Sam's masculinity is called into question. On one hand, he is not doing enough; on another, his solutions are seen as barbaric. His daughter is caught in Cady's net, confused by this strange man who gives her attention. Scorsese stages their meeting like a fairy tale, with Max as the Big Bad Wolf. Their interplay is sensual and unnerving. Lewis and De Niro are electric together, so much so that it's hard not to feel uncomfortable for everyone involved. Is it that hard to see why Sam might want his foe beaten with pipes and bicycle chains? 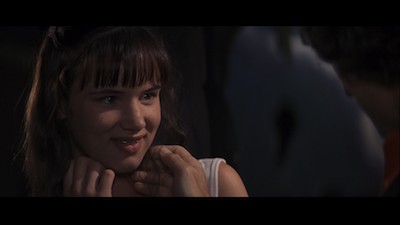 Scorsese creates a heightened sense of melodrama for Cape Fear. The world becomes abstracted the more Max Cady takes control of it. He claims to a certain divinity, and his mission of revenge does have a direct effect on reality*. Scorsese and his cinematographer Freddie Francis (Glory, The Elephant Man) establish a visceral shooting style, full of emphatic zooms and extreme close-ups and aided by Thelma Schoonmaker's breathless cutting in the editing room. Matte paintings are used to give the background atmosphere an otherworldly appearance (the maroon skies look particularly frightening in high-definition), while other camera tricks reduce the human characters to their most basic. Figures are seen in X-ray, or reduced to just heat signatures, transforming them from fully formed human beings into something elemental. It's a visually stunning choice. Cape Fear is like a living thing, full of nerves and kinetic energy, pulsing with extreme emotion.

This, of course, paves the way to the climax, where Cady and Bowden de-evolve. These are two cavemen smashing at each other, grunting and howling, dismantling all ingrained societal inhibitions. In the final shots, Nick Nolte even looks like an ape, hunched over on the riverbank, staring into the abyss. De Niro is largely remembered for the palpable menace that he embodies in Cape Fear, but Nolte delivers the essential performance. Here is a man who thinks he is in control, but who has been leading a compromised existence for some time. He sold his own ideals down the river, and that's what gives Max Cady leave to come traveling back up it.

I have now seen Cape Fear at least four different ways, and with each viewing, my appreciation for it grows. I've come a long way from my initial dismissal of the movie (back in 1991, I saw it at a drive-in!). What once seemed needlessly exaggerated and pointlessly shocking now strikes me as masterfully conceived and brilliantly executed. This Cape Fear has an impact that nearly equals the original, and there is room for both of them to exist within the same space. It's the kind of exception to the rule that even remake haters have to concede to. As a subversion of both the revenge movie and the vigilante justice picture, it's genre cinema at its most creative and profound and perhaps Scorsese's most in-your-face effort. 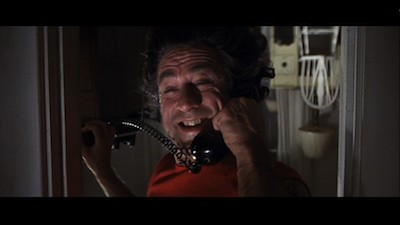 * I originally mistyped "morality" here, and though I changed it, I suppose that works, too.

Video:
The widescreen (2.35:1) 1080p transfer looks fantastic, bucking the trend for Universal titles to get overly scrubbed up for Blu-Ray. This time, there is very little by way of artificial noise reduction or enhancement; instead, we get a crisp image with vibrant, nuanced colors and deep, uncrushed blacks. The surface grain is excellent, and the deep level of detail gives an excellent showcase for Scorsese and d.p. Freddie Francis' innovative use of color and striking compositions. It's not an entirely brand-new viewing experience, but it's close, with the climactic sequence in particular looking remarkable. Every drop of water, fleck of spit, or splatter of blood is right there on your TV.

Sound:
The original soundtrack is nicely handled as a DTS-HD Master audio 5.1 mix. There is excellent balance between the elements, with clarity placed on the dialogue when necessary and nice use of modulation for softer material. The iconic Bernard Herrmann score, here reconfigured by Elmer Bernstein, sounds dynamite coming through the speakers. Instances of loud noises really rock the viewer--as they are supposed to--but more subtle work in the back speakers makes for an appropriately tense atmosphere, as well.

The French dub also gets a 5.1 DTS mix. Subtitle options are Spanish and English SDH.

Extras:
The Blu-Ray for Cape Fear carries over almost all of the extras from the earlier two-disc release, with the only things missing being some text-based bios and material on the DVD-ROM--which could cause some to save their old sets, since that had the screenplay on it. (Then again, maybe not: the disc doesn't run on my Mac; it is Windows 95 compatible, so one assumes you can still play it on your PC, but you might want to check.)

Included in the package, and ported over in standard definition are the twelve deleted scenes and two very short behind-the-scenes featurettes: "Behind the Scenes of the Fourth of July Parade" and "On the Set of the Houseboat." These are all fine for what they are, but largely inconsequential.

The meaty extra is the hour-and-twenty-minute "The Making of Cape Fear" documentary, which goes through the production with a fine-toothed comb, examining all aspects of development and adaptation. All notable players are involved, and it's the kind of bonus that reminds us how good DVD features can be when the studio isn't phoning it in.

There are also galleries featuring photos and one showing the difference between the matte paintings used for backgrounds and the composite shots featuring them. There is also a neat collection of opening credits sequences by Saul Bass.

Lastly, there is a theatrical trailer as well as access portals to Universal's BD Live.

FINAL THOUGHTS:
Martin Scorsese's remake of Cape Fear is a strong statement on violence and the effects of man's inhumanity to man. Smart-guy lawyer Sam Bowden, played with determination and brittle pride by Nick Nolte, is confronted by the mistakes of his past in the form of the very real, very angry convict he sent to prison 14 years prior. Robert De Niro is all kinds of evil as Max Cady, and Scorsese pushes the boundaries of filmmaking as far as they can go to tear these two men down. The Blu-Ray presentation of this most unique motion picture is excellent, holding on to the solid supplemental material from the earlier DVD release. It's a winner for Universal's Blu-Ray department, and Highly Recommended. 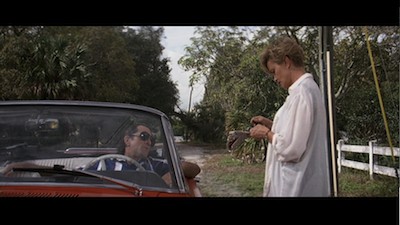