Please Note: The images used here are from the standard definition DVD included with the Blu-Ray and not from the Blu-Ray itself. 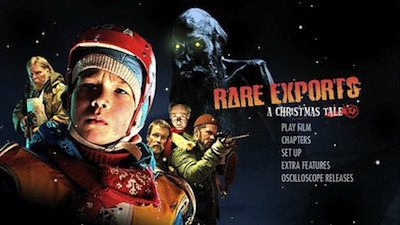 What if Santa Claus were real, but instead of being the kindly old gentleman you see on greeting cards, he's really a horned devil who comes and steals naughty children for punishment? This is the Santa that the little boy Pietari (Onni Tomilla) believes in. He's read about the true Kris Kringle in books, and when an American company begins drilling in the mountain near his Finnish home, he's scared of what they'll find. Is that Santa Claus living deep down there in the frozen earth?

Rare Exports: A Christmas Tale was a surprise hit last year when it was released to theaters for the holiday season. Written and directed by Jalmari Helander, it's an entirely original take on the Christmas mythos. Tired of traditional family fare but not quite ready for the gore and splatter of Silent Night, Zombie Night? Then Rare Exports is exactly what you're going to want in your stocking. It's like Super 8, but on the frozen tundra and with a lot fewer lens flares.

Pietari lives in the arctic with his widowed father (Jorma Tomilla), a reindeer herder who relies on the yearly migration of the big animals to put food on the table and money in the bank. The first sign that something is up is that the entire herd ends up dead before they even arrive. At first the locals think it's wolves stirred up by the drilling and explosions of the excavators, but weird stuff starts happening. Radiators get stolen, and all the kids go missing--except Pietari, who is also the only one who notices. At the same time, a bizarrely resilient old man ends up in dad's wolf trap. Is that Santa?

What we have here is essentially an old-fashioned sci-fi monster movie. Having captured the geezer they believe to be Santa, the men try to sell him back to the Americans. Of course, the whole scheme is much larger than they bargained for, and only young Pietari really gets what is going on. Everyone thinks he's strange and won't listen to him. He's wearing hockey gear and cardboard armor and dragging around a stuffed animal on a leash, so he doesn't appear to be the most reliable witness. But, as they get to the bottom of things, it's going to be up to Pietari to save the day.

Onni Tomilla is a pretty good child actor. He ably balances his fear with determination. Knowing you're right is more important than being scared. The most developed relationship in the movie is between the young boy and his father, but that is no surprise when you realize that the actors fulfill the same roles in real life. The elder Tomilla displays a natural mixture of warmth and stern frustration, the sort of thing a real father would know instinctively. The back and forth between the two adds an authentic energy to Rare Exports that allows it to work as a family movie despite its odd premise and, you should be warned, a lot of naked elf wang.

Helander and his team, including cinematographer Mika Orasmaa, have made a fun, stylish movie. The dark skies and frosty landscape make for a perfect chase atmosphere. Flakes of snow tumble over credible computer graphics, and the music of Juri and Miska Seppä helps set the mood using familiar, but effective tactics. Kimmo Taavila's editing is smart and swift, making sure the movie never rests too long. Though, actually, that might be Rare Exports' lone problem. At a slim 82 minutes, the mystery doesn't fully take hold before we get the big reveal, and Pietari devises his plan for success a little too easily. I was just getting into it, there was still more room to play!

Thankfully, Helander still has a funny, twisted ending up his sleeve. Here the quick execution works perfectly, we don't have time to get hung up on the logic of it all. It's a gleeful, cynical commentary on the worldwide commercialization of a holiday, like Linus Van Pelt's worst nightmare. No treacle-laden hugs to ring out this pageant. Rare Exports is dark right to the finish, and it's a wonderful gift for those sick of socks and fruitcakes. And hey, aren't we all? 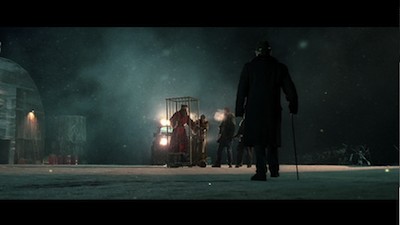 Video:
Oscilloscope has put together a fantastic package for Rare Exports. The 1080p transfer, shown in a 2.35:1 aspect ratio, is crisp and vibrant. Colors look strong, as do the shadows and blacks. Detail is impeccable, with a stunning depth of field and a conscientious rendering of texture. Every falling snowflake is visible, and the CGI is shown in clear resolution without any of the illusion being lost in the process. I saw no signs of DNR or other artificial enhancements.

Sound:
The bold 5.1 DTS-HD Master Audio uses front and back speakers effectively, sprinkling effects around the room as necessary. Dialogue sounds strong, and the music is given a nice, full position in the mix so that it can enhance the material as intended.

The main audio is a mixture of Finnish and English, and the subtitles are written well and easy to read. An alternate subtitle track for the deaf and hearing impaired is also available. There is also a second stereo soundtrack for those who might want something a little less bombastic.

Extras:
Oscilloscope Labs are well known for their innovative packaging. Made from recycled materials, it's a cardboard foldout book with an outer slipcase. The packaging is sturdy and handsomely designed, with two interior sleeves, one to hold the Blu-Ray and another to hold the bonus DVD that comes with it. Special features, except for one, are the same on both versions. 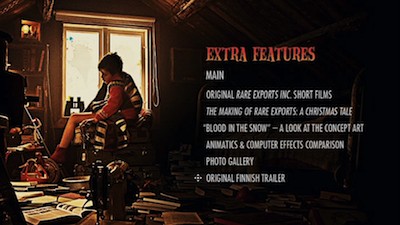 Some of the extras touch on standard behind-the-scenes territory, including the 28-minute making of that gathers interviews with the cast and crew discussing how the film came about. There is also a four-minute animatic and computer effects comparison video that is exactly as it sounds, as well as the must-see "Blood in the Snow," a three-minute featurette showing off the cool production art for the film. Images of the paintings are matched with their real-life enactments. There is also a photo gallery of pictures from on set.

Fans of the movie will appreciate the inclusion of the two short films from 2003 and 2005 that started Jalmari Helander developing the idea for Rare Exports. The first is the seven-and-a-half minute Rare Exports Inc. and the second is the eleven-minute Safety Instructions. Both feature much of the same cast, and they are basically promo videos for a service that is part of the plot of the main movie. For that reason, they would best be saved until after you've watched the full-length. The transfers on these shorts are excellent.

The Finnish theatrical trailer rounds out the shared extras.

Blu-Ray fans get the dubious exclusive "bonus" of legendary turkey Santa Clause vs. the Martians. This 100-minute feature from 1964 is a bit of a chore to get through. It sounds fun, but it's not. I remember being excited to see it as a kid, and then disappointed to such a degree that I could never finish watching the afternoon TV broadcast. I admit to not being able to finish it here, either. The beat-up print used for this release doesn't make it any easier, either. I don't believe in "so bad it's good," but even if I did, this wouldn't fit, it's just plain bad.

FINAL THOUGHTS:
Recommended. Rare Exports: A Christmas Tale is a fun perversion of the holiday movie. It's good, not great, but that's okay. It's a horror/sci-fi/family film hybrid, a demented mutant cousin of Amblin Entertainment, about a world where the true purpose of Santa Claus is to be the punisher of naughty children. Awakened after many years by greedy industrialists, this twisted Father Christmas immediately starts to change things for the bizarre in one Finnish small town. The production values are fantastic, as are the performances, I could have just used a little more in the final act. The packaging, transfer, and supplements are all stellar, however, making for a winning stocking stuffer for that special cinephile in your life. 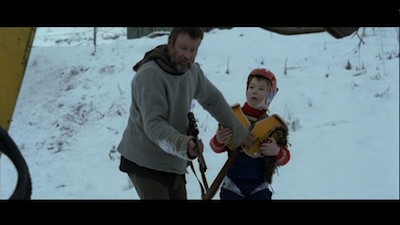