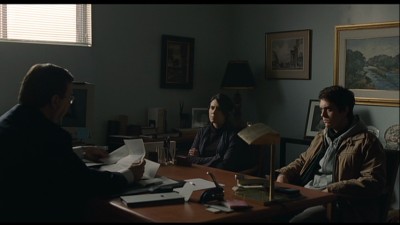 Please Note: The screen captures used here are from the DVD edition, not from the Blu-ray disc under review.

War, geopolitical upheaval, and the accompanying disruption of all personal routine and rationality is something sadly more common than not, which is easy to forget if you are one of the privileged minority (like me and, most likely, like you) who have never experienced those things firsthand. In his film Incendies, Québécois director Denis Villeneuve (working from a stage play by Wajdi Mouawad) gives us a quasi-allegorical rumination on the self-perpetuating cycles of aggression, resentment, and recrimination that have created such dispiritingly permanent war conditions in so many parts of the world. By taking a quite literally tragic approach to dramatizing the ripple effects of this strife into individual, relatively serene North American lives that seem far removed from violence, oppression, and suffering, he not only refocuses our awareness onto some of the more discomfiting realities of the world around us, but asks us to seriously gauge and ponder the ways in which we choose to cope with that awareness and respond to those realities. 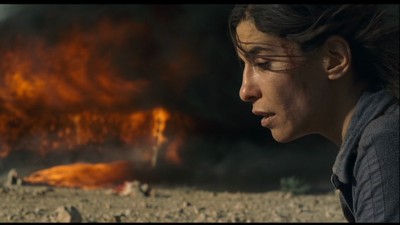 The North Americans in question are two second-generation members of an immigrant Canadian family, twin brother and sister Jeanne and Simon Marwan (Mélissa Désormeaux-Poulin and Maxim Gaudette, respectively). As the film opens, we find them in the office of a notary, M. Lebel (Rémy Girard, The Barbarian Invasions), who employed their recently deceased mother, Nawal (Lubna Azabal, Paradise Now), as a secretary for many years after she emigrated with her children to Montreal from an unspecified Middle Eastern nation. Nawal has left three letters with the notary: one each to Jeanne and Simon's father (whom they believed to be dead) and their older brother (whose existence they were unaware of until this moment), and one to Jeanne and Simon themselves, to be opened after the others are delivered. This delivery would be no small undertaking, as it would involve returning to their mother's country of origin and doing the possibly dangerous and certainly demanding detective work of tracking down two men whose names and locations they have little idea of. Simon rejects the idea as overly quixotic, but Jeanne decides to honor her mother's last wish, and so, with M. Lebel's avuncular help, she begins a journey that will lead her--and Simon, as well, when it becomes too much for Jeanne to bear alone--to discover some shocking things about who their mother was and the life she led before fleeing across the Atlantic, opening their eyes to some brutal but essential facts about themselves, their family's past, and the world they live in--a world that they, too, are a part of, no matter how sheltered they have been from its morally murkier complications. 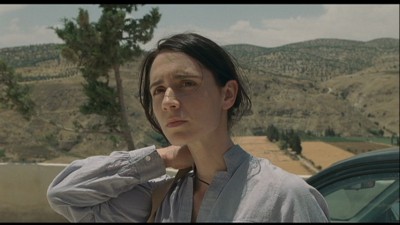 In the film's paralleling-flashback structure (reminiscent of the integral temporal layering in the films of Villeneuve's countryman Atom Egoyan), we retrace, along with Jeanne and Simon, Nawal's long, tortuous transformation from a poor, illiterate Christian village girl in area of the Middle East riddled with violent Christian vs. Muslim conflict into a Canadian office worker with a comfortably anonymous middle-class life. Nawal's journey has also necessitated a degradation of her initial bridge-building, peace-seeking principles to an embrace of violence in the name of justice, a process that begins when her boyfriend, a Muslim, is killed by her fanatical, fundamentalist brother. The final blow to her belief in peaceful conflict resolution comes when she directly experiences the horrific massacre of an entire bus full of innocent Muslims--women, children, everyone--committed by a band of her co-religionist but ideologically opposite Christian Nationalists. To the shame of her strictly religious mother, Nawal was pregnant with her boyfriend's child at the time he was killed, and she was forced to give up the child--a boy, Jeanne and Simon's brother--at birth, landing him in a Christian orphanage vulnerable to attacks from the Muslim side of the never-ending civil war and leading him to a radically different destiny than those of his younger brother and sister. In such a perennially war-torn region, identities and locations are slippery but memories are long, something that we, along with Jeanne and Simon (whose ongoing investigation continues in present-day segments alternating suggestively with Nawal's story) discover as the film advances steadily toward its resolution to the mystery of Jeanne and Simon's unknown father and brother--a denouement so bitterly ironic that it would not be at all out of place in the capital-T tragedies of the Holy Bible, Sophocles, or Shakespeare. 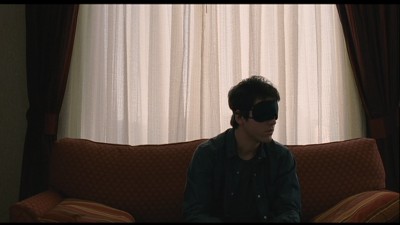 Somehow, Villeneuve's cool, assured, and even tone and pacing, with the immeasurable contribution of André Turpin's photographically clear, level, availably-lit cinematography, makes the implausible coincidences upon which this story turns seem entirely convincing and deeply, almost primally touching. (Freud would have found as rich a field to mine in Incendies as he did with Hamlet or Oedipus Rex.) Villeneuve is dealing not in the brazen artificiality of melodrama, but in the heightened, mythical/allegorical realism of tragedy; and the dignified, absolutely sober restraint with which he directs his marvelously controlled actors and stages and shoots each of the film's events and developments creates a well-thought-out cinematic plane where the story's events, despite their unlikeliness, achieve their bold impact through an ancient, difficult-to-achieve alchemy of narrative symmetry and gravity. 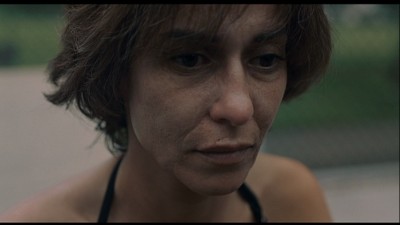 It is a tricky business to "universalize" by creating a composite, fictional armed conflict whose horrendous inhumanity and long-running hatreds are clearly meant to evoke various real historical events that actually happened to specific individuals, communities, and nations; but this is what Villeneuve and Mouawad attempt to do here by withholding the specifics of where and when, exactly, Nawal's experiences take place. The potential benefit of such a tactic would be to make us feel her journey more deeply--deeply enough to implicate us, too--and give us the sense that all such conflicts have in common, in their origins and escalations, certain all-too-recognizable human weaknesses, pride, and violations that coalesce into a reality that is nightmarish no matter exactly where or in precisely what way it arises, and always closer and more connected to us than we would prefer to imagine. But the risk of the universalizing conceit is that the film could be neutralized by a historically indeterminate vagueness that only reinforces any complacent tendency the viewer might have to automatically categorize what it is depicting as something that only happens, and could only happen, someplace else and to someone other than oneself. This reviewer's unequivocal impression is that Villeneuve lands Incendies well onto the right side of that divide. Through his sheer skill and profound understanding of the power available to cinema, he creates a deeply affecting work that is at once very immediate and, through its carefully constructed, emotionally resonant allegorical significance, relevant and applicable to both our retrospective grasp of past atrocities and to our hopefully raised consciousness of what continues to befall our fellow human creatures at this very moment. 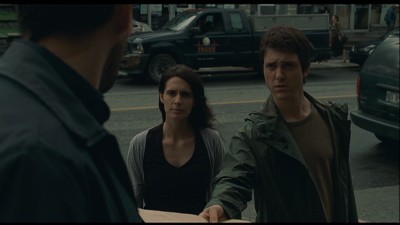 
The AVC/MPEG-4 transfer at 1080p, presented anamorphically at a 1.85:1 widescreen aspect ratio, is stunning. As detailed in Villeneuve's commentary, this is a cinematographically very beautiful but very nuanced film that depends on available light and some subtle degrees of shadow and darkness, and thanks to the care and attention to detail on display here, all of that visual subtlety is as present in high-definition on your home screen as it was in theaters. The transfer is simply perfect, not just a wonderfully vivid but an extraordinarily fine-tuned use of the Blu-ray format.


The French (Québécois) DTS-HD Master Audio soundtrack is perfectly executed, as well. The film is on the more dialogue-driven side, but even the sound design of all the intimate scenes has a certain weight of near-imperceptible "room noise" that creates part of the film's atmosphere and is re-created through your sound system here, along with the more expected but still perfectly balanced, loud-and-clear surround of scenes containing gunfire, background street noise, etc. The roar of a huge, blazing inferno in a crucial scene is especially noticeable for the well-preserved fullness and detail of its sound.


An engaging feature-length commentary (in English) with Villeneuve reveals him to be a charmingly enthusiastic and humble personality as he goes from such specifics as a scene's extremely low lighting or use of Steadicam to broader ponderings of what cinema is and is not capable of, sometimes almost too self-critically assessing this or that sequence or choice of shot/lighting/music, and giving all deserved, effusive praise to the actors and cinematographer.

The more unusual extra is Remembering the Ashes: Incendies Through Their Eyes, a 45-minute making-of by documentarian Anaïs Barbeau-Lavalette. Though we do see Villeneuve at work filming some key scenes, de-centers Incendies itself to focus on the refugees (from Lebanon, Iraq, Palestine) cast as extras and in small parts, who have themselves lived through some of the horrors depicted in the film and who, as interviews with them reveal, are sometimes still personally mired in the kind of post-traumatic psychological spiral that the film addresses. This approach yields some rich insights and gives us yet another thought-provoking perspective from which to appreciate the moral and ethical minefield Villeneuve entered--and asks us to enter with him--in making Incendies.

The disc also includes Incendies's theatrical trailer and a handful of trailers for other Sony Pictures Classics releases. As is standard for Sony, this is a "Blu-ray + DVD Combo Pack" that includes an additional DVD disc containing the film (minus the extras).


Director Denis Villeneuve has intentions for Incendies that are very similar to those of two other recent films that made a valiant effort to grapple with the very treacherous place where war, humanistic principle, and human nature intersect and overlap: Susanne Bier's In A Better World and Annemaire Jacir's Salt of This Sea. But whereas those films faltered in their search for the best tone and narrative structure with which to properly explore such a loaded theme, Villeneuve has hit upon a mode worthy of its seriousness: tragedy in the oldest sense of the term, tragedy so devastating that it seems to have been pointedly inflicted by indifferent or hostile fate. In the perfectly calibrated context that Villeneuve masterfully creates in Incendies, however, it is not "fate" but our own collective failure to find a way to break our cycles of hostility, aggression, and recrimination that is responsible for the cruelest of personal tragedies. Highly Recommended.