Kon Ichikawa had done this before, in his superb Tokyo Olympiad (1965), still the best-ever documentary about the Olympic Games. Leni Riefenstahl's Olympia (1938) may be better known but that film, while technically dazzling and visually exquisite, elevated its athletes into something resembling modern-day Greek gods. Ichikawa, on the other hand, in bringing the competitors back down to earth, not only portrays them as resolutely, identifiably human, but in turn also makes their accomplishments all the more extraordinary.

Visions of Eight takes a similar approach, so much so that several of the segments look more like Tokyo Olympiad than Ichikawa's does. Indeed, what's most surprising about the film is just how unified a work it is. Each segment contributes to the whole and never seems self-indulgent.

The complete absence of extra features, especially in light of what was included with Criterion's Tokyo Olympiad DVD, is a little disappointing but the transfer is excellent and the movie deserves to be widely seen. 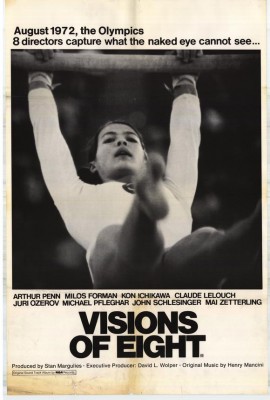 The Tokyo Olympics went off without a hitch and served partly as a celebration of now-pacifist host country Japan's postwar recovery and emergence as a First World power. But the 1968 Olympics in Mexico City were marred by the Tlatelolco massacre of student and civilian protesters shortly before the games commenced, and later by the politicization of the games itself when American medal winners Tommie Smith and John Carlos raised black-gloved fists in what was regarded as a "Black Power salute" (though Smith later insisted it was a silent protest for all human rights). The 1972 Summer Olympics in Munich, the first in Germany since the 1936 Games in Nazi Berlin, are today remembered primarily for its "Munich Massacre." Black September, a Palestinian terrorist organization, took eleven athletes and coaches from the Israeli team (along with a West German police officer) hostage, all of whom were eventually murdered, most during an unsuccessful rescue attempt. All this unfolded during the second week of the Games, and in the very heart of the Olympic Village housing athletes. Visions of Eight acknowledges the tragedy but references it chiefly in the final segment, "The Longest," directed by Schlesinger, and overall strikes an appropriate balance.

Each segment is at least pretty good, as is the prologue directed by Mel Stuart (Willy Wonka and the Chocolate Factory, the 1971 film from the same producers also shot in West Germany). However, each segment is unnecessarily preceded by black & white photographs of each director - Kon Ichikawa has his trademark cigarette balanced on his lower-lip in four out of the six pictures of him - with too literal voice-over introductions. With the exception of Forman, to my ears the non-native English speakers sound like actors have dubbed them.

Apparently Henri Mancini scored all of the segments, even those featuring avant-garde music, though each director seems to have been allowed to collaborate with others of his choosing. Dede Allen (Bonnie and Clyde) edited Penn's segment, for instance, while Arthur Wooster shot Schlesinger's.

Your mileage may vary, but I liked Zetterling's, Penn's, and Lelouch's segments best. Zetterling's "The Strongest" looks at Olympic weightlifters, men who, back then anyway, were impossibly huge and hairy brutes who made Mike Mazurki look like a midget. And yet the segment demonstrates that weightlifting requires at least as much psychological skill as it does brute strength. As with Japanese sumo it's also a question of precise timing and psyching one's self up to do something incredibly dangerous, a feat that proves too much even for many of these musclemen. As with Tokyo Olympiad the film lingers on the logistics as much as the competition: when it's over soldiers working the Games casually dismantle everything, making way for the next event.

Penn's segment is the only one without a spoken introduction, probably at his wise insistence. It's marvelous but must have driven moviegoers and theater owners nuts. The first several minutes are completely silent, no sound at all, and the images onscreen (shot by Walter Lassally), of pole-vaulters flying through the air, are deliberately, completely out-of-focus. The effect is wonderfully surreal and beautiful just the same, eventually giving way to in-focus shots as each athlete gracefully twists his body just over (or not) the cross bar, and each man's reaction as they fall.

Claude Lelouch's segment zeroes in on "The Losers," offering a wide variety of reactions to defeat and, often, Games-ending injuries. Wrestlers valiantly struggle to press on despite torn ligaments and dislocated limbs, and even after the game is lost they fight on, refusing to be carried off in a stretcher. Some are sore and emotional losers, others appear shell-shocked, staring blankly into space while contemplating a life without Olympic Gold.

The remaining pieces are also fine. Ichikawa's "The Fastest," examines a single, ten-second 100-meter dash filmed with high-speed cameras and particular interest in the runner's faces, stretched and contorting with wild-eyed, gaped-mouth determination. Forman's "The Decathlon" is notably odd, comically incorporating cow bells, yodelers, and cloggers, as well as a band leader who's a dead ringer for Jack Nicholson. (I thought it was Nicholson until going back and looking at him frame-by-frame.)

Visions of Eight is presented in 16:9 enhanced widescreen with a 1.78:1 aspect ratio. The opening titles and some of the opticals are a little rough, but most of the film looks great, with excellent color and clarity. The region 1 encoded disc is in English only with no subtitle options and there are no Extra Features at all.

Considering how corporate-driven the Olympics have become, and how the media and public invariably latch onto made-to-order sports celebrities, Visions of Eight is, like Tokyo Olympiad, a refreshingly humanist film as interested in the anonymous support crew and the last-place Marathon runner. Highly Recommended.