Paramount // Unrated // October 11, 2011
List Price: $36.98 [Buy now and save at Amazon]
Review by Stuart Galbraith IV | posted October 31, 2011 | E-mail the Author
About ten months after the release of the previous volume, along comes Gunsmoke - The Fifth Season, Volume 1, the latest of what theoretically could turn out to be a 40-volume run of Gunsmoke DVDs, if the format still exists by the time CBS-Paramount even get around to the mid-1960s, let alone the mid-1970s shows.

That said, I've found these taut, half-hour, black and white shows from the late 1950s and early '60s to be generally much superior to the later, one-hour (and later still) full color ones. They offer compact, intriguing little scripts that play like short stories, the acting is usually excellent, and the direction and production values are comparable to movie Westerns of the period.

This latest volume includes the first 20 episodes of the 1959-60 season, when as the Number show in the Nielsen Ratings, Gunsmoke had a 40.3 rating and a 65 share, numbers unimaginable today. (For instance, the Number 1 show during 2005-06 was American Idol, which had a 17.7 rating and a 27 share.) The 20 episodes are spread over three single-sided, dual-layered DVDs, and as always look great. Sponsor spots are included as an extra feature and, this being the first Gunsmoke release since the death of star James Arness (he died on June 3, at the age of 88), a short tribute video has been included. 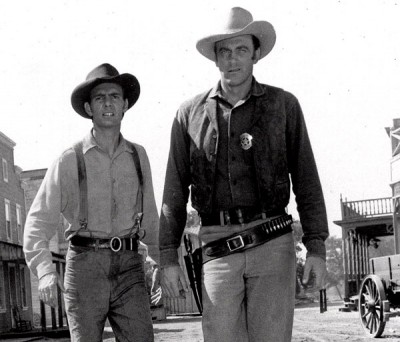 Writer John Meston (1914-1979) was to Gunsmoke what Rod Serling was to Twilight Zone; he penned an incredible 257 episodes of the series during its 20-year run, and that's not counting episodes of the radio show he also wrote (though there was a lot of crossover, apparently). Of the 20 episodes in this set, Meston wrote or co-wrote 17 of them. Two of his favorite devices are the "What's Going On Here?" and "How's Matt Going to Solve/Get Out of This?" structures, with Matt presented with a puzzling situation/irresolvable conflict at the beginning of the episode, and he and other characters working through the mystery which is revealed/resolved, often violently, at the end. A favorite plot Meston did myriad riffs on has cool cucumber Matt withholding judgment on an accused killer's guilt or innocence while all of Dodge City is ready to lynch the accused. Sometimes in these shows the accused is a friend of Matt's, like Chester, sometimes he's a guest star, but always, even with a mountain of evidence stacked against him, Matt remains calm and just. The other three shows, as well as other episodes co-written with Meston, were by Les Crutchfield, a former miner and explosives expert who wrote a comparatively paltry 56 episodes after penning 81 radio shows.

I didn't watch every episode but several stand out. "Kitty's Injury" is an interesting show ever so ambiguously hinting at deeper feelings between Matt and Kitty. When her horse is spooked, Kitty is very seriously injured in the fall and Matt wants to rush back to Dodge to fetch Doc Adams. However, she's terrified at the prospect of being left in the care of a family of Deliverance-types, leaving Matt in a quandary.

Like previous seasons, some of the best episodes fall into one of Meston's two favorite categories. "Horse Deal" is a "How's Matt Going to Solve This?" episode. Locals are furious that a horse thief is repeatedly selling horses stolen from a man named Deesha (Harry Carey, Jr.), while Matt doesn't seem to be doing much about it. "Annie Oakley," a bizarrely named show considering the Western icon doesn't appear and is barely, cryptically alluded to, is a "What's Going On Here?" episode. Plain-looking Kate (Florence MacMichael) is angry when Matt refuses to arrest her neighbor, Mr. Dolliver (John Anderson), who she accuses of murdering her husband (George Mitchell) hours after the two men were seen fighting over her in Dodge. Anderson is particular good as the accused man, and his reactions to Matt's direct questions are subtly played.

Beyond that, it's pretty much business as usual. Star Arness was understandably regarded as a valuable asset by CBS, and that's probably why they gave him more control of the series. Beginning with Season 5 Arness is credited as "Associate Producer" and the show a production of "Arness and Company." Bert Rumsey, the original Sam the bartender, had left the series by this point, but it would be a while before Glenn Strange would take over the part.

Gunsmoke looks exceptionally good on DVD. Shows are a bit overly grainy (especially during the opening titles, reworked slightly for syndication) but otherwise they're very sharp, very clean. The 20 black and white episodes are spread over three discs, with a total running time of about eight hours and 41 minutes. The Dolby Digital mono (English only) is clean and clear, and the show is closed-captioned. The packaging allows viewers to read the episode descriptions inside the snap case without having to remove any of the discs.

Included is a short but pleasant "James Arness in Memoriam," mostly a montage of clips stretching from the first episode all the way to the last Gunsmoke TV movies from the mid-1990s. Arness's own voice is heard briefly, talking about the character (I think it's excerpted from the 50th Anniversary Collection set), and there's some home movie footage of Arness and Weaver on location, in costume. It's nothing spectacular but kudos to CBS for remembering Arness at all, in this unexpected way.

Also included are sponsor spots for Remington, the electric shavers company, and L&M cigarettes, including a pitch for the smokes from Arness himself.

Another set of musts for Western fans, especially for those who recognize that the half-hour, black-and-white Gunsmokes actually hold up better than the more recent color ones. Taut and movie-like, Gunsmoke is classic American television and Highly Recommended.