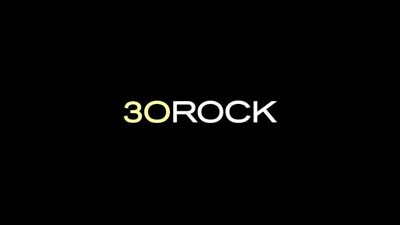 
The Story So Far...
Tina Fey's 30 Rock goes behind the scenes at an SNL-style sketch comedy show, headlined by a likely insane Tracy Jordan (Tracy Morgan) and an equally-insane diva (Jane Krakowski), operating under the corporate oversight of Jack Donaghy (Alec Baldwin). Surreal and hugely clever, the show has become a critical hit, earning a load of awards. The first season was released on DVD in October of 2007, followed by annual releases for the next three seasons. DVDTalk has reviews of all four collections.

The Show
This season is dominated by four main storylines, two of which are inspired by real life. The show's main leads, Liz and Jack both have some lifestyle changes to deal with as they enter new stages of their lives, with Liz turning 40 and entering true adulthood, complete with a legitimate relationship (with her pilot boyfriend Carol (Matt Damon)), while Jack marries his girlfriend Avery (Elizabeth Banks) and becomes a father. It's a big change for a series that's kept things relatively unchanged for its characters over four years. But thankfully, at their cores, they are still the people we've come to love over the past four years, just facing new challenges.

Meanwhile, GE gives way to new NBC overlord Kabletown, mirroring Comcast's real-world take-over of the network, giving the show even more parody meat to chew on. The show has never held back when it comes to the network's ratings struggles, but the arrival of Kabletown, its homespun CEO Hank Hooper and a new corporate culture opens all new doors for jokes, as Jack scrambles to impress his new bosses. Closer to home, Tracy Jordan disappears to Africa, reflecting Morgan's real-life health problems, as he dealt with a kidney transplant. Jordan is frequently a thorn in Liz' side through his ever-present antics, but never more than when he leaves the show in the lurch at its most dire hour, setting up Liz' search for her missing star (aided by sweetly disturbed NBC page Kenneth (Jack McBrayer).) 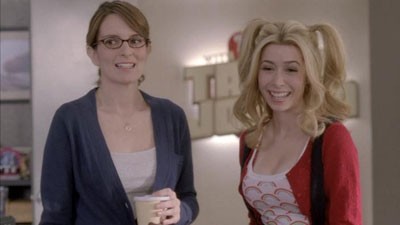 Woven through these four story arcs are any number of plots that range from simple, like Tracy being the victim of a con by his "son," to more complex, like Liz combating complaints that the show is anti-women by hiring a new female writer (Cristin Milioti) who happens to be a pneumatic blonde who talks like a baby. The show's ability to keep things fresh is beyond admirable, especially when it comes to introducing new characters, including one-offs like Avery's vaguely-ethnic nemesis Carmen Chao (Vanessa Minnillo) or the insane Tea Party candidate Jack backs in "Brooklyn Without Limits" (John Slattery.)

It's the attention to detail in characterization that gives the show its rich cast, whether you're talking about regulars like Frank the writer (Judah Friedlander), who gets more of a backstory (complete with Susan Sarandon goodness,) or occasional guests like Paul (Will Forte), Jenna's cross-dressing boyfriend (who happens to be a Jenna impersonator.) It's certainly a sign of critical acclaim, quality craftsmanship and simple cool cache that the show is overflowing with such fun cameos, including appearances by Alan Alda, Paul Giamatti, Queen Latifah, John Cho, Margaret Cho (as Kim Jong Il), Elaine Stritch and Will Arnett.

The great thing about the show's surreal, askew sense of humor is the way it makes jokes appear out of nowhere. The dialogue can frequently be nonsensical, which makes perfect sense for a group of characters so self-absorbed that reality bends around them. It would be hard to find an episode where there aren't several moments that get big laughs out of unexpected jokes. Though this often has been a key component of Tracy Morgan's character, as his questionable mental state lends itself to interesting thoughts, but everyone, including Jack Donaghy himself, slips into stealth mode, hitting you with a comedy uppercut when you least expect it. And then, even if you see the zig coming, it still makes you laugh.

Though the show has maintained a somewhat even keel through its first four seasons, this year they stretched a bit, trying a few new things, including a live episode and an off-format episode. The live episode was certainly ambitious, not even taking advantage of the natural breathing room afforded by titles or commercial breaks, while the solutions for the show's flashbacks and the need for Liz to be in two places at once were strokes of genius. That they kept up the show's fantastic sense of humor under such different circumstances is just fantastic. While the live show was great, the off-format show, which was presented as an episode of Tracy's wife's reality show The Queen of Jordan just didn't do it for your reviewer. Part of it is certainly my distaste for "housewife" reality TV, but the 30 Rock style doesn't work as well in this setting, even if the storyline that tried to portray Jack as possibly gay was rather humorous.

It would be rather difficult to pick out a best overall episode, as every one has moments of glory, but a top three would have to include "Mrs. Donaghy," where Jack accidentally marries Liz, not just for the way she holds it over him (and her voice as Mrs. Donaghy), but for the subplot with Jenna, Kenneth and Danny (Cheyenne Jackson) and a bonus Dr. Spaceman appearance. Also in the running would be "Brooklyn Without Limits" for its dual stories of Liz' jeans and Jack's candidate, both of which are simply ridiculous, and "TGS Hates Women," which features not just the female writer storyline mentioned before, but also a fantastic story between Jack and Hank Hooper's granddaughter Kaylie (Chloe Grace Moretz), which absolutely needs to be revisited, as it gave us a Jack we only see when he's faced with a true foe, like Arnett's Devin Banks. In a season where Jack's marriage, fatherhood and new corporate culture threatened to soften him, this allowed him to go back to basics, and that it was in response to a tween girl made it all the funnier. 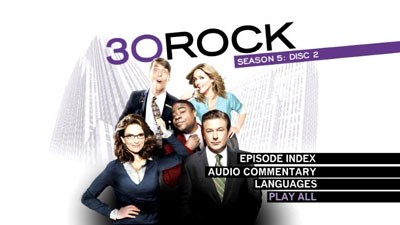 The DVDs
The 22 episodes from 30 Rock's fifth season are spread over three DVDs, packed in a three-panel, slipcase-held digipak, which has episode descriptions. The discs feature static, anamorphic widescreen menus offering options to play all episodes, select shows, adjust languages and check out the special features. Audio options include English Dolby Digital 5.1 and 2.0 tracks, while subtitles available in English SDH and Spanish, though there's no closed captioning.

The Quality
Delivered via anamorphic widescreen transfers, these episodes look quite nice, though after watching them in high-definition, the image here feels a bit less impressive. That said, the level of fine detail is quite nice and the colors, including fleshtones, are impressive throughout. You'll really see the difference in the shot-on-video live episode, though there are no issues with digital artifacts across the board.

Like previous 30 Rock releases, these Dolby Digital 5.1 tracks are mainly about the dialogue, which takes center stage, while music bleeds into the surrounds, along with some minor sound effects. Everything is clean and clear, but there's nothing dynamic about the mix, so don't expect a whole lot (not that you really would with a comedy like this.)

The Extras
There are 10 audio commentaries this time around, including one for the double-length episode "100," and like on previous sets, the discs producers had some fun putting these together. As a result, it's not your standard participants like the cast and crew (though some mix of them are present on most tracks.) Instead, you get unique commentaries like hearing from McBrayer and the people who raised him, allowing you a little insight into his background (and thankfully his parents are fun to listen to.) Or you get guest stars like Aaron Sorkin and Jon Hamm, who oddly offers their thoughts on episodes they weren't involved in. Or, on an even more unusual angle, you get to hear from Val Kilmer, who is just a fan of the series, joining his MacGruber co-star Will Forte to talk about an episode Forte isn't in. Like the series itself, these tracks don't provide the obvious, and they are better off for it, presenting some added enjoyment. Unfortunately though, the Morgan track is a disappointment, as he doesn't have much more to add than his overwhelming praise for the show, and Kupfer doesn't take the wheel to improve matters.

There are 23 deleted scenes included on this set, but there's no play-all option, which is a bit annoying. That they are presented in letterboxed full-frame widescreen is also a pain, but most of them are at least pretty funny, including a rather bizarre appearance by Bobby Moynihan as Liz's super.

For fans, it's nice that the west coast version of the live episode is included, so us east coast media elites can see what the other half saw, even if the differences were somewhat minor, limited mainly to the opening theme and the fake commercials. But even more important, there's a look behind the scenes of this special episode (12:39).

Jack Donaghy, Executive Superhero a series of three animated web shorts (under six minutes in all), make the jump to DVD here. Though they get off to a good start with a clash between Donaghy and Brian Williams, the longest of the three episodes, the others are just OK and are mainly for hard-core fans.

The extras wrap up with Jenna's obituary song, a short clip of her singing that won't get more than a look or two for most people, though I don't think I caught her performance as Doc Brown to Jordan's Marty McFly before. 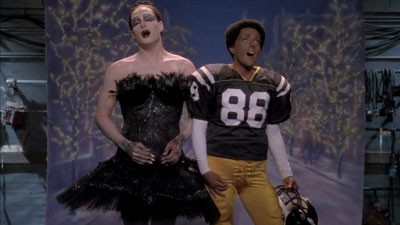 The Bottom Line
The joy of 30 Rock is the way it manages to keep surprising after years of following the same, relatively unchanging characters, thanks to writing that's frequently ridiculous and hilarious, and a cast that makes even the most over-the-top situation feel real, and thus even funnier. The set looks and sounds excellent, and includes a bunch of enjoyable extras that will certainly entertain fans of the show. It's also not a bad place for newcomers to jump in, with some clearly defined storylines and the characters in full development.