Thundercats: Season One, Book One 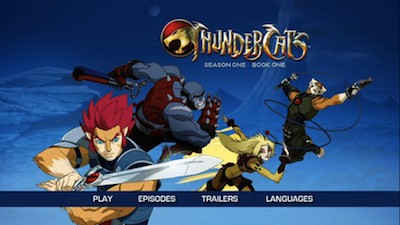 The original Thundercats premiered on syndicated TV in 1984. The Rankin/Bass animated show ran for four seasons, which might lead you to believe it was good. Let's be honest with ourselves all these years later: it wasn't. It was stiffly animated and formulaic. Even at the age of 12, my friends and I made fun of its cheeseball endings where the cat warriors cracked a joke, put their hands on their hips, and laughed into the sky. The survival of the Thundercats over the decades has been down to misplaced nostalgia and some smart merchandising. Never underestimate the power of a good logo.

This past September, Cartoon Network premiered a brand new Thundercats produced by Warner Bros. and the Japanese animation studio 4°C. To say that this reboot is an improvement on the original isn't saying much, but it's still worth saying. As evinced by Thundercats - Season One, Book One, the new animated series is a consistently entertaining show with a pleasant art style that melds the old Rankin/Bass design with more modern anime sensibilities.

This beginning DVD set spreads eight episodes across two discs, beginning with the two-part premiere "Omens." These two shows set up the newly expanded backstory for Thundercats. In Thundera, feline/human hybrids rule over other animal/humanoid species, including dogs and the kingdom's real enemy, the lizards. Young Lion-O is set to be the next king of Thundera, though his brother Tygra seems better suited and even their father has some misgivings about some of Lion-O's strange ideas. (He likes experimenting with things, is compassionate, etc.) Yet, much has been foretold about the kingdom by the lost Book of Omens and its companion weapon the Sword of Omens. The king has sent two of his best men, including the warrior Panthro, to find these objects. Unfortunately, they have failed, and in doing so, opened the door for the evil Mumm-Ra and the reptile hordes to attack Thundera. The city falls, the king is killed, and Lion-O is cast adrift. He must find the Book of Omens and regain the throne and do a whole lot of growing up along the way. 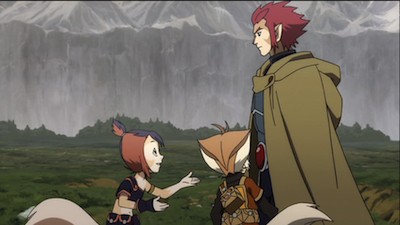 The basic plot of the episodes that follow features Lion-O on his quest. Going along with him are his brother, his pet Snarf, the female warrior Cheetara, and two quick-witted street urchins, WilyKit and WilyKat. Each week, the group encounters a new obstacle on their journey, ranging from a crazy Fishman captaining a ship that sails across the desert to a fighting town and the dangerous swordfighter whose weapon rivals even the Sword of Omens. These one-time adventures are meant to teach Lion-O something about himself and prepare him for his destiny. I get the sense that the producers of the show watched Avatar, the Last Airbender and cribbed that show's basic structure for their own. Even naming the DVD "Book One" echoes the naming conventions of Avatar. It's not a bad show to associate oneself with, though you do risk seeming lesser by comparison--a problem the new Thundercats definitely has.

Thundercats is perfectly enjoyable as a mild adventure show. The animation is clean and largely consistent, with solid action sequences and some nice plotting that allows for interesting creatures and situations. The best show is episode 4, "Song of the Petalers," in which the gang encounters a race of plant creatures who have an accelerated life cycle and also a strong instinct for optimism. Written by noteworthy comics scribe J.M. DeMatteis, it's a creative take on what could otherwise be a pretty conventional story, borrowing a tad bit from Hayao Miyazaki but fitting that influence neatly into the Thundercats universe.

"Song of the Petalers" is also one of the only episodes here that is as smart as the animators think it is (another contender is the flashback episode with Panthro that follows it). Where Thundercats - Season One, Book One tends to falter is in its mythology. The "serious" foundation that the creative team tries to lay under this fantasy cartoon isn't nearly as deep or intriguing as it needs to be to make for more exceptional all-ages entertainment. I found it hard to care about the characters or where they were going. As distracting trifles, the individual installments work, but the more you dig into Thundercats, the more the shows seem like empty plot exercises, hitting the right beats at the right time, but doing little more than showing off the production team's capacity for efficient light entertainment.

To be fair, Thundercats - Season One, Book One does get better as it progresses, and maybe in the second half of this season, the series will hit a more accomplished stride; however, it's still a toss-up whether I'll be around to find out. 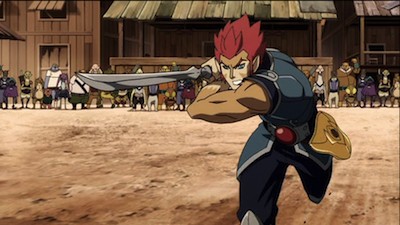 Video:
Thundercats - Season One, Book One has eight episodes, each intended to be broadcast in half-hour time slots, running about 22-minutes once the commercials are gone. The programs are shown here in anamorphic widescreen. Colors and resolution are excellent, with no clear instances of combing or other digital glitches.

Sound:
The audio is mixed in Dolby surround and it has good volume levels and lots of oomph in the special effects. Though the sound is mostly centered, it still packs a decent wallop where it counts.

Extras:
Outside of a couple of trailers for other animated shows, none.

FINAL THOUGHTS:
Thundercats - Season One, Book One is fun for a go-around, but it hasn't enough narrative heft to warrant more than a Rent It. The adventure series improves on its 1980s origins, offering some clean animation and added plot details that make it more than corporate trademark preservation or a nostalgic cash-in, but honestly, not much more. I don't see myself returning time and time again to watch these shows. In fact, I could easily have abandoned them midway through. A momentary distraction, but lacking much else. 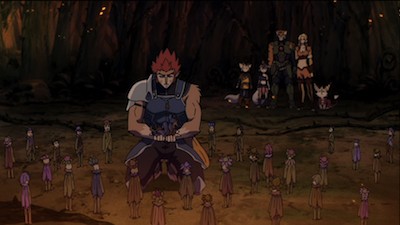