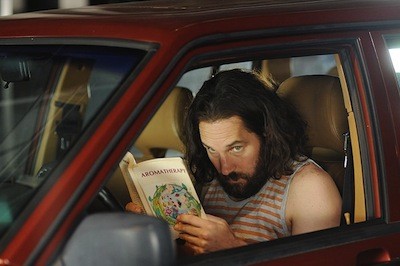 Ned is a good guy. Too good. The hippy-dippy fruit seller believes that the more trust you put in the world, the more you will be rewarded with happiness. And so it is that Ned ends up selling a police officer marijuana from his stall at a farmer's market in rural New York. Not an undercover police officer, but a cop in full uniform, that's how trusting Ned is.

And that's how we're led into Our Idiot Brother, a likeable film that's not nearly as dumb as it appears on the surface. A little like Ned. He is played by the always-charming Paul Rudd, who dives all the way in for the role, burying his good looks under long hair, a beard, and some hideous tank top and shorts combinations. When Ned gets out of prison nearly a year later, he hopes to return to his old life on the farm with his dog Willie Nelson, but his girlfriend (Kathryn Hahn) has moved on. She kicks him off the co-op and takes his canine. Set adrift, Ned returns to his family. He has three sisters: the career-minded writer Miranda (Elizabeth Banks), harried mother of two Liz (Emily Mortimer), and kooky bisexual Natalie (Zooey Deschanel). All three will be burdened with having Ned crash on their couch at some point in Our Idiot Brother, and all will judge his loosey-goosey lifestyle. Loosest of all is Ned's lips, and he will innocently blab secrets and revelations that will upend everyone's lives--including, once again, his own.

Our Idiot Brother is directed by Jesse Peretz (Important Things with Demetri Martin) and written by Evgenia Peretz and David Schisgall. In terms of plot, the film covers some fairly predictable comedic ground. Paul Rudd was actually in a similarly minded film about a year ago, but in Dinner for Schmucks, he played the other side of the coin as the straight man to Steve Carrell's chaotic moron. Schmucks was a tad more mean-spirited and far more broad and absurdist in its humor; Our Idiot Brother takes a different path. Our Idiot Brother wants to make nice, enlisting the audience as Ned's friend rather than his begrudging companion. I actually didn't laugh out loud all that much while watching it, it's more dry and serious than that. Still, that doesn't mean I wasn't won over. 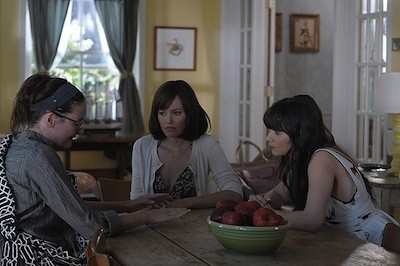 All of the interpersonal problems that Ned's sisters have are interesting ones, even if they are designed to seem as ridiculous to us as they are to Ned. Natalie is afraid to commit to something more serious with her girlfriend (Rashida Jones), and she makes some bad choices with a new-agey painter (Hugh Dancy). Infidelity also plays into Liz's relationship. Her husband (Steven Coogan) is sleeping with the subject of a documentary he is shooting. Meanwhile, Miranda is pursuing her first big story, trying to get the scoop on the romantic troubles of a charitable heiress (Janet Montgomery), while at the same time failing to go for the obvious and starting her own romance with her downstairs neighbor (Adam Scott). Ned, of course, finds out all of these things and, in his way, passes the information along, pushing everyone to their breaking point. He's not malicious, it never even occurs to him to be.

Again, there aren't a ton of surprises here, but the writing is concise and playful without hammering too heavy on the clichés. As a director, Peretz also trusts his actors, and he makes great use of his stellar casting by letting each performer work to his or her strengths. Seriously, look at the players again. How did one small movie score these people? And none of them really have minor roles, either. Adam Scott maybe has the least amount of screen time, but his scenes are some of my favorites. Our Idiot Brother's best sequence is when Ned, the eternal optimist, sits down with Scott's character Jeremy, an avowed cynic, and they weigh the prospects amongst the female patrons of a coffee shop. Ned sees the date material in all of them, whereas Jeremy quickly predicts how it will all go wrong. No more needs to be explained, the behavior speaks for itself.

Naturally, by the time Our Idiot Brother finishes, lessons will be learned and everyone will be closer, but the filmmakers bring it together in such an unaffected manner, you won't care how expected so much of it is. Paul Rudd is just too damn irresistible, and you'd have to be a real creep not to want him get his way.

By the way, you should stick around for the closing credits. There is a blooper reel, and while it's mostly nonessential, the final clip is a quintessential Rudd moment. I swear, I just can't quit the guy. 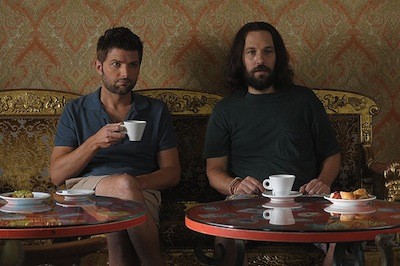