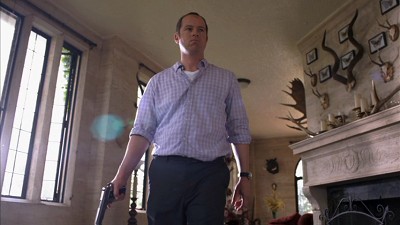 Thanks to the internet and an entire generation of film fans weaned on the genre classics of the 1970s and 1980s, I think I'm tired of homage. So many movies made today wink and nudge; if I never see another goofy B-horror flick in the tradition of The Evil Dead, it won't be soon enough. Restitution, however, is a more unique problem: writer/star Mark Bierlein and director Lance Kawas only seem to know how to execute some of the scenes in their unintentionally funny thriller through the language established by other movies. It's not quite the same -- I don't think the cinematic references are intentional -- but many scenes in Restitution play like the most subtle Zucker-Abrahams-Zucker production never made.

Bierlein plays Alex Forrester, an author who's just moved into a small town to write a book based on the murder of Bryan Spikes, a local insurance investigator turned serial killer (turned murder victim). Prime interview subjects include the local doctor who performed the autopsy, the officer who investigated the disappearance (Michael Robert Brandon), and local bartender Heather (Mena Suvari), who was romantically involved with Spikes right before his killing spree and subsequent drowning in a local river. With the help of his loudmouth neighbor Tom (Tom Arnold), Alex uncovers a trail of suspicious activity leading toward John Youngstown (C. Thomas Howell), owner of a local shipping company.

Right from the beginning, Restitution plays less like a movie and more like an interpretation of a movie cooked up by space aliens. My favorite example comes about halfway in: a minute-long montage of Alex putting the facts together. Voice-over details the thoughts in his head as images pop up on-screen:

Although the thinking behind the scene is clear, and evident in the way Bierlein's voice fades in and out, the execution is so bizarrely on-the-nose, it's almost impossible not to laugh. Restitution is filled with moments like this. In one scene, Alex goes to meet a mysterious tipster with info on Spikes, and the scene is like a parody of any number of "paranoid public park meeting" scenes in political thrillers. 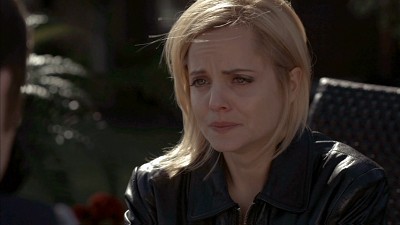 When Alex sees a key witness about to be harmed from his porch, he rushes back into his apartment, grabs a gun (because all good authors just happen to have a handgun) and dashes across the street. In many ways, the execution of his dash through traffic and around pedestrians is just fine, but there's a nagging artificiality to the way he gets hit by a car and keeps going or shoves a balloon vendor out of his path that makes the experience unintentional comic gold.

Bierlein occasionally confuses the audience's understanding of the movie with that of his characters. He and Kawas show Spikes on the job, filming a few people to see if their claims are valid. Later, a police officer shows Alex the footage, which has had similar, candid footage of the murder victims spliced in. Since the victims and the people Spikes were investigating are the same people, the tape makes a sort of logical sense, except for the fact that Spikes isn't actually in the footage -- the viewer knows Spikes took the footage, completing the "frame-up" for them, but there's no reason it should be incriminating evidence to the police, even though it was found among Spikes' possessions. In another scene, Alex realizes his car has been rigged to explode at the last second, diving to safety. A passerby picks him up, cheerfully asking "Are you okay? Looks like someone wants you dead!" before strolling away, as if car bombs are an everyday occurrence. The character ultimately turns out to be the bomber, but it should still be completely bizarre to Alex.

Bierlein is also not the greatest actor. His wooden performance defuses several scenes involving him and his veteran co-stars, and he looks like a whiny child when moving into seething anger or outright rage. A movie like Restitution makes you feel sorry for some of the cast, who are clearly taking the best work they have available to them, and try to put forth some effort in return for the money. Tom Arnold's schtick is skittish and jittery, as if he's afraid the whole movie is a Candid Camera stunt, but he's clearly trying to improvise and give his character a bit of (weird) life. Howell is barely in the movie and his motivations are vague, but he does what he can with very little. Most depressing of all is Mena Suvari, whose natural charisma and decent acting ability ought to be put toward better material than this; a moment where she breaks down in tears and Bierlein responds with an especially emotionless line reading is indicative of her whole role.

After a ludicrous action finale, the film arrives at an astonishing twist conclusion that features a grand piano inexplicably set on the beach, and some remarkable suspension of disbelief. In some ways, it's kind of psychotically brilliant -- I have to admit, I didn't put it together, even though I'm sure I was merely distracted by the movie's other quirks. On the other hand, it doesn't really bring the story together in any meaningful way (despite all of Alex's unusually strong gun and hand-to-hand combat skills, the ending does not reveal him as an undercover FBI agent), and it's hard to imagine it playing out even in the flimsy world the characters inhabit. I almost want to recommend Restitution, because it's such an entertaining experience, but unfortunately for Bierlein and Kawas, almost none of that value is intentional.

The Video and Audio
Pros: this 1.78:1 anamorphic widescreen transfer boasts extremely vibrant colors and a remarkable amount of fine detail. Some of the close-ups almost look like HD in terms of being able to see the texture of the actors' skin or the individual strands of hair. 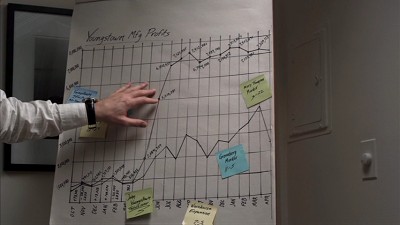 Cons: much of the movie was filmed in low light or at night, and the image gets murky when the light is low. Blocky noise rears its head, and a faint amount of posterization is visible. Shades of the color also break down in the darkness, with skin covered in flecks of red and green. Audio is a Dolby Digital 5.1 track that has that "weightless" feeling to the sound effects, particularly gunshots, that so many low-budget and direct-to-video films are often dogged by. Although directionality is okay, there's not enough ambience for the audio to become very immersive; it just has that flat, low-budget movie feel to it. No subtitles on the disc, but if your TV offers closed captioning functions, they are available here.

The Extras
A single feature is provided: a behind-the-scenes featurette (19:48), which consists of B-roll footage with audio commentary by Lance Kawas laid over it. Right at the beginning, Kawas states he wanted to live up to his heroes: Fellini, Bergman, Eisenstein. Yup. Topics discussed include the movie's turbulent, down-to-the-wire financing, the constrained shooting schedule, and working with the biggest stars he's had on one of his movies to date. Some of the B-roll is charming (I'm telling you: Suvari is all charm), but the commentary is a little dry.

No trailers play before the main menu (two DVDs in a row...shocking!), but a trailer for Restitution is included.

Conclusion
I laughed quite a bit during Restitution. Too bad the movie is a mystery thriller. Unless you're looking for some so-bad-it's-good fun, skip it.