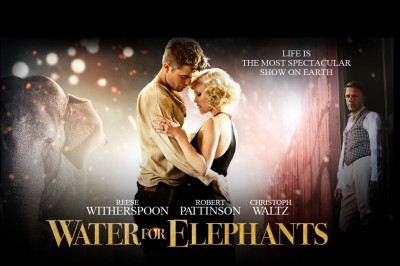 The dazzling spectacle of the circus was a popular pastime in America before Prohibition and the onset of the Great Depression. These traveling shows featured acrobatics, animals and selected oddities, and were a way to escape reality. Water for Elephants, based on the novel by Sara Gruen, is set in the days when America's economy began to falter and the life of a carny grew increasingly more difficult. This handsome adaption from Director Francis Lawrence (I Am Legend) is buoyed by superb production design and the work of actors Christoph Waltz, Reese Witherspoon and Robert Pattinson, but, like the Big-Top shows it depicts, Water for Elephants is a somewhat shallow spectacle.

Cornell veterinary student Jacob Jankowski (Pattinson) leaves school days before graduating after his parents are killed in an automobile accident. Suddenly lacking a home and the desire to finish his studies, Jacob hops on the boxcar of a traveling circus train. When circus owner August Rosenbluth (Waltz) discovers Jacob is riding the rails for free, he decides to kick him off the train, but reneges after learning of Jacob's veterinary training. August gives Jacob a job taking care of the animals, with emphasis on training the show's newest attraction, Rosie the Elephant. Soon after, Jacob notices Marlena (Witherspoon), the beautiful star of the circus and August's wife.

The attention to detail in every frame of Water for Elephants is impressive. The costumes are gorgeous, and the circus caravan and sets are elaborate. Director Lawrence focuses primarily on his three leads, but provides glimpses of the seedier side of the circus. August and Marlena sleep in a luxury compartment on the train, but the lowly performers double bunk, booze and party as they travel across the country. Some of the dancing girls get Jacob so drunk that he cannot remember whether or not he should be ashamed of his indiscretions.

As ticket sales decline, the animals go hungry and the performers go unpaid. August grows increasingly irritable, taking his anger out on poor Rosie as Jacob and Marlena watch in horror. Jacob soon fancies Marlena, who scolds him for playing dim when she returns the favor. Their affair is unintended and initially innocent, but August soon catches on. Jacob and Marlena escape a speakeasy raid without August, who later forces the pair to awkwardly re-enact their transgressions. Most of the circus crew likes Jacob, but August still controls enough goons that Jacob cannot steal Marlena away even if she is willing to leave her husband.

I appreciate the period-specific simplicity of Jacob and Marlena's relationship. Water for Elephants is not some tawdry romance, and Marlena does not throw herself at Jacob. Instead, Jacob fills the void created in Marlena's life by selfish August with conversation and companionship. Waltz does an excellent job teetering between the charismatic, likeable showman and the arrogant, pitiless businessman that make up the two sides of his character. Witherspoon's Marlena is a wisp of a character; all soft remarks and earnest glances. The actress is not known for portraying such stifled, broken characters, but she does well in the role. Pattinson, who adopts a convincing American accent, seems as nervous as Jacob in several scenes. This actually serves his character well, and Pattinson is convincing in his boyish excitement and resolve. Hal Holbrook is also good as an older Jacob in the film's present-day bookend scenes.

Water for Elephants is a perfectly pleasant spectacle from start to finish, but it is not without flaws. The film's greatest weakness is a lack of depth. The dramatic proceedings receive only surface-level exploration, and the film only briefly sketches its characters' flaws. Consequences are highest for Rosie, who bears the brunt of August's unhappiness, but I never believed Jacob was in any sort of physical danger. At one point, Marlena remarks that the rules of life do not apply to circus performers. That means they can be as genuine or false as they desire. Such duplicity makes these characters difficult to crack, and they tend to reduce the drama around them to emotionless spectacle.

The 2.35:1/1080p/AVC-encoded transfer for Water for Elephants is quite strong. The film's production design is top-notch and its cinematography beautiful, and the Blu-ray's transfer preserves the intended look. Colors are warm and bold, and even the brightest reds and blues do not bleed. Detail and texture are strong, especially in close-ups, and the image's depth is frequently impressive. Grain is minimal and some shots are slightly soft, but nothing indicates the use of any digital noise reduction or edge enhancement. Black crush is apparent in several darker scenes, but this never becomes a big problem. I noticed no problems with aliasing or compression artifacts.

The film's 5.1 DTS-HD Master Audio soundtrack is restrained but very effective. The track excels when tasked with immersing viewers in the circus environment. Ambient effects, crowd noise, and directional dialogue and animal chatter roll out of the surround speakers. Dialogue is crisp and balanced appropriately with the effects and score, and softer scenes retain excellent clarity. The LFE and surround speakers come alive during several action sequences, and the track's range is impressive. Spanish and French Dolby Digital 5.1 tracks are also available, as are English SDH and Spanish subtitles.

Fox's two-disc set for Water for Elephants includes the Blu-ray and a digital copy disc. A beautiful, shiny slipcover wraps the Blu-ray eco-case. A host of in-depth special features add value to the set:

Director Francis Lawrence's accomplished adaptation of Sara Gruen's book is beautiful to look at and packed with impressive detail in every frame. Water for Elephants is somewhat shallow in its exploration of characters traveling with a Prohibition-era circus, but Christoph Waltz, Reese Witherspoon and Robert Pattinson comprise an attractive love triangle. Fox's Blu-ray features excellent picture, sound and extra features. Recommended.