"Have you ever met a man of good character where women are concerned?" - Professor Henry Higgins 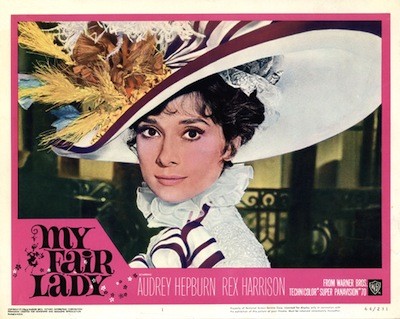 I'll admit from the get-go, I'm a huge Audrey Hepburn fan, but My Fair Lady is one of my least favorite films she starred in. It's just too stuffy and too overstuffed. Though there are a lot of things I like, there is also plenty I could do without. Strangely, it's also the Hepburn film I've probably owned the most copies of--two different VHS releases, three DVD releases, and now a Blu-Ray. Jane, stop this crazy thing!

Directed by George Cukor in 1964, My Fair Lady was based on the popular stage musical by Alan Jay Lerner and Frederick Loewe, which was itself based on the George Bernard Shaw version of Pygmalion. Rex Harrison stars as Professor Henry Higgins, a linguistic expert and insufferable blowhard who makes a bet with his colleague, Colonel Pickering (Wilfrid Hyde-White), that he can take a lowly cockney flower girl and turn her into a Duchess within six months. Audrey Hepburn plays the girl, Eliza Doolittle, a scrappy kid who isn't afraid to take care of herself. Higgins puts her on a rigorous course of practicing her vowels and working to obliterate her accent. His desire is to prove that language is the key to smart society, that a woman who speaks properly can be accepted anywhere, even Buckingham Palace.

This is one of many Cinderella stories that Hepburn starred in. In fact, it's the most fully fleshed riff on the theme, a dirty girl who toils in the gutter turned into a fake princess who even turns the head of a Transylvanian prince. (Alas, he's not Dracula.) She even eventually runs away and has to be tracked down! Hepburn is very funny as Eliza, hamming it up with the exaggerated accent, and clearly enjoying all the screaming and yelling in the first act. She and Rex Harrison make a good pair, firing back and forth at one another with gleeful spite. The actor was never better than he was here. It's a testament to his natural magnetism that he is so good at making Higgins so hateful, and yet he still comes out of it as Prince Charming.

My Fair Lady is a gorgeous film to look at. With production and costume designs by the great Cecil Beaton, who won two of the eight Oscars that went to this picture, it's a grand spectacle of flowers and ribbons and bows. The day-at-the-races sequence is unforgettable, which is why it's usually the part publicity stills are drawn from. Beaton decks out the society crowd in black-and-white, saving most of the color for the gorgeous bouquet he places at the top of Eliza's hat. Cukor films the introduction of the race scene as a staged tableau, the stopping and starting rhyming with a similar introduction to the street life that Eliza has come from. And, of course, the sequence is capped by the funniest scene of the movie, with Eliza slipping back to her old ways and shouting out for her horse to move 'is bloomin' arse.

It's kind of too bad, though, that it's always the race gown that gets the most notice from My Fair Lady's wardrobe. I actually prefer the shimmering gown Eliza wears to the embassy ball and the pink number she dresses in for the final scenes. She has won the bet for Higgins by then, and she carries herself like the lady she has become. It's also when Higgins' neglect causes the rift between them, the one that causes his somewhat unconvincing transformation into a man in love. Hepburn's performance hints at her feelings throughout the film. Cukor allows her several glances in her teacher's direction that lets us know that he's winning her heart while he's altering her vocabulary. Higgins never has any such moments, and he is, after all, the man who sings of the virtues of bachelorhood in the slightly horrifying he-man-woman-hater's anthem, "I'm an Ordinary Man." Part of the point of the movie is precisely that he never did pay attention, but I could have used with a little more hint that Eliza has gotten under his skin or at least proved herself invaluable to his household.

While I'd have liked to see more in the love affair, I would have been just fine with less elsewhere. For instance, they could have dropped the Freddy character (played by Jeremy Brett), Eliza's supposed suitor. The subplot yields very little, and his signature song, "On the Street Where You Live," is the most bland number in the film. I could have also lived without the two songs sung by Eliza's father. Stanley Holloway's performance as Alfred P. Doolittle is hilarious when he's talking people's ears off, but his musical numbers, "With a Little Bit of Luck" and "Get Me to the Church on Time" go on forever.

Now that I think of it, the songs are probably the thing I like least about My Fair Lady. I find most of them too overblown, excepting maybe "Wouldn't It Be Luverly" and, of course, the one bonafide classic from the songbook, "I Could Have Danced All Night." For me, the musical interruptions just drag the movie out. I'd have much preferred to see Hepburn and Harrison in Shaw's Pygmalion, or maybe a souped-up comedy version of the same. I realize that this is blasphemy, that the Lerner and Loewe tunes are practically sacred ground, but I do think that they are what cause My Fair Lady to drift for me. It's a movie I always start off enjoying, but to get through its near three-hour running time, I always end up checking in and out a little. Tonight I did my dishes while Freddy cornered Eliza in the street. Had it gone on much longer, I might have started vacuuming.

Video:
Paramount released a truly awful DVD of My Fair Lady a couple of years ago, so it's with great relief that I can type that they did right by the film for its first foray into high-definition. The 1080p widescreen transfer (2:52) isn't a total knock-out, but it is a clean upgrade that brightens up and sharpens what we are used to seeing, sticking closely to the restoration project from the mid-90s. Colors are strong, and there is a lot of fine detail, including an excellent rendering of fabric and finer details of props and wardrobe. It's hard to put an exact finger on exactly why this one doesn't kick the way other BDs of classic films do. Maybe given the size of many of Cukor's scenes, a greater sense of depth and clarity wasn't too much to ask? Outside of a some edginess, there is nothing wrong with the image here, but there still seems room to make it more right. I don't feel like I've stepped that far away from how I've seen this movie before, as opposed to say, when I saw Charade on Blu-Ray or the high-def Breakfast at Tiffany's in the theatre.

Sound:
The DTS-HD MA 7.1 audio track that leads the Blu, on the other hand, is killer. Music swells through the speakers, playing with the different planes to create nuance and a full orchestral atmosphere. Dialogue is given punch, and though the general business of the picture is maybe not given as much attention, it's a relatively minor gripe.

Extras:
There are a handful of extras here and they are all the same basic material we have seen in various incarnations over the last several years, matching the two-disc Warner Bros. release (which still has the best packaging).

* Audio Commentary with art director Gene Allen (whose contribution was minimal), singer Marni Nixon (who dubbed Hepburn), and the restoration producers
* More Loverly than Ever: The Making of My Fair Lady Then & Now: a quality hour-long documentary dating back to the film's restoration in the 1990s.
* Six vintage featurettes, all dating back to the release of the film, including footage from a dinner given to start production, an audio track featuring George Cukor directing, a 10-minute promo piece called "The Fairest Fair Lady," footage from the premiere, and Golden Globes and Oscar pieces.
* Two songs featuring Audrey Hepburn's original vocals
* Two trailers: The 1964 original and the 1994 re-release
* "Comments on a Lady": extended clips of Andrew Lloyd Webber and Martin Scorsese sharing thoughts on the movie, which are actually larger versions of interviews from the "More Loverly Than Ever" documentary
* A short radio interview with Rex Harrison played over some lobby cards and publicity material, which is rather annoying marred by large timecode numbers.
* A gallery of stills, production art, and promo pieces

The extras are presented in standard definition.

FINAL THOUGHTS:
Highly Recommended. Though not my favorite Audrey Hepburn movie, I am a completist, and this is a bonafide classic that deserves to be seen and owned by all cinema fans. Hepburn is delightful, and Rex Harrison is wonderfully gruff as the professor teaching her proper English. The movie is a tad long and the songs a bit naff, but the overall package here is pretty great. Definitely give this one an upgrade.