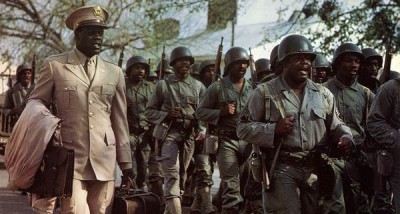 Tensions flare on a U.S. Army base in Louisiana in 1944 after a black sergeant is killed following a night of drinking. Fort Neal is where African American soldiers are cooling their heels waiting to find out if Uncle Sam will ever look past their skin color and send them to Europe to shoot some Nazis. When the officer is killed, Washington sends a black army lawyer to the base to investigate what happened. There he confronts racism while trying to piece together the true account of who the dead man was and how he came to be shot in the middle of the night.

A Soldier's Story is a 1984 motion picture directed by Norman Jewison (In the Heat of the Night, Moonstruck), working with writer Charles Fuller to adapt Fuller's own hit play to the big screen. Howard E. Rollins, Jr. plays Captain Davenport, the attorney with a righteous mission. The cast features a bunch of future African American stars, including Denzel Washington as the stubborn PFC Peterson and comedians David Alan Grier and Robert Townshend as one of Peterson's comrades and Davenport's driver, respectively. Each soldier tells a different tale of Sergeant Waters (Adolph Caesar), a prickly career officer whose toughness may have been born of his own racial bias. The first testimonies are not entirely what they seem, and the deeper Davenport digs, the more complicated his case becomes.

This is essentially a legal drama, with a typical back-and-forth structure that goes between the present day of the investigation and the flashbacks of each man's anecdote. It's one of those scripts where the lawyer magically confronts each witness in order, building his narrative chronologically, piece by piece. What makes A Soldier's Story somewhat interesting is its different setting and the racial undercurrents that complicate the endeavor. The first impulse is to think that the KKK was somehow involved, but evidence actually points to within the army. The main sticking point is, if either is true, neither the top brass nor the neighboring community will allow Davenport to arrest a white man. Naturally, Davenport finds a reluctant white ally in the captain who was the victim's superior (Dennis Lipscomb), all leading up to a final scene where the two men can shake hands as equals.

No, I'm not kidding. That really is the end of A Soldier's Story. Jewison's film is earnest in its desire to be a strong black drama, presenting its story and its characters with well-meaning sincerity. The problem is, the script has too much polish on it, the pieces fit together too well, and, despite touching on some sensitive topics, A Soldier's Story lacks any significant edge. The soldiers talk about lynching matter-of-factly, with mild annoyance rather than any pronounced anger, and despite representing a variety of personalities, any unsavory traits are stripped away, leaving us with black army men who are all mild enough to be inoffensive. There's something terribly out-of-date about this collection of "types," like Fuller took the stock platoon from actual WWII-era movies way too seriously. Ironically, for all the filmmakers' good intentions, some of the southern stereotypes amongst the soldiers even border on racial caricature.

I think as much of the problem lies at Jewison's door as it does Fuller's. Even for 1984, his pedestrian directorial style seems twenty years behind the times, and the sanitized dramatics feel as if they'd have been better suited for TV than movie houses. The actors do their best with the material--Washington is already an absolute charmer--but they can't quite get past the toothless dialogue. Matters aren't helped by Herbie Hancock's score. The composer heavily underlines dramatic moments with obvious cues, and his anachronistic use of funky synthesized sounds detracts from the credibility of the period setting. Likewise, canned musical numbers by Pattie LaBelle and Larry Riley in the black nightclub come off as forced. It's a movie about African Americans, right? You have to have a couple of blues routines!

I am sure these missteps are unintentional, and the fault may not be with A Soldier's Story so much as it is with how we view things in this day and age. I remember the movie being well regarded upon release, and it was likely seen as progressive for the era. Hell, given how Hollywood bigwigs apparently reacted to the idea of an all-black cast when George Lucas was pitching Red Tails, getting A Soldier's Story off the ground would probably still be seen as progressive today. Even so, that wouldn't stop what ended up on the screen from being terribly average.

Video:
Image releases A Soldier's Story as a 1080p high-definition transfer, framed in widescreen at a 1.85:1 aspect ratio. The upgrade to Blu-Ray here leaves something to be desired. It doesn't look like too much was done to prep the material for HD, and the end result is a slightly fuzzy picture with muted colors and hazy backgrounds. It's not particularly horrible, and might look fine if it were a standard DVD, but for a Blu-Ray, it's sorely lacking. Everything about this edition feels cursory, like the studio just slapped it together and put the thing out while giving little regard to whether or not the specs fit the format.

Sound:
The soundtrack is mixed as an uncompressed PCM Stereo track that has decent volume levels and an overall clarity that allows the dialogue to come through without any distortion or glitches. The music sounds a little tinny at times, but that just might be the fault of the 1980s and not the Blu-Ray manufacturing.

There is an optional closed-captioning track for English speakers, as well as regular subtitles in Spanish.

FINAL THOUGHTS:
Rent It. Norman Jewison's A Soldier's Story is an artifact from another time, one that probably looked pretty slick on its release but that's now just clunky and undercooked. The 1984 drama stars Howard E. Rollins, Jr. as a military attorney in WWII looking into the murder of a black sergeant. The legal drama follows predictable paths, and though it's neatly packaged--or perhaps because it is--A Soldier's Story fails to gather any real steam. Denzel Washington delivers a fine early performance as one of the soldiers, but other than that, A Soldier's Story comes off as hopelessly old fashioned.