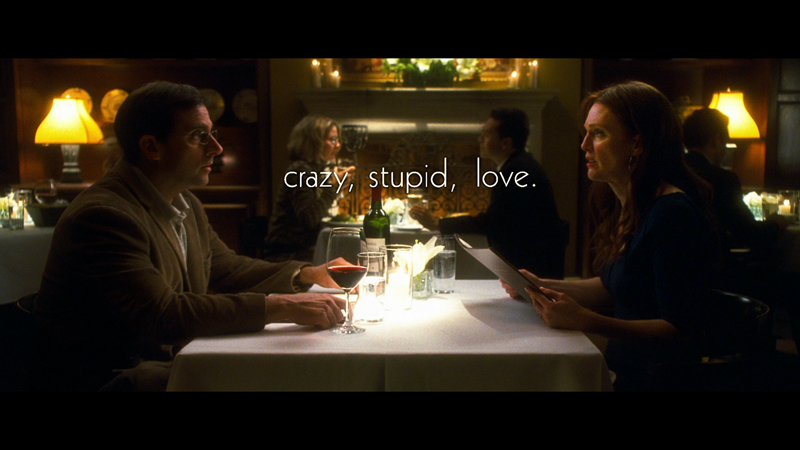 
The Movie
You know what's not funny? Divorce. From the toll it takes on the couple going through it to the trauma it inflicts on the children who find themselves in the middle of it, it can be a severely harrowing experience. You know what's funny? Apparently what happens once divorce rears its ugly head. Or at least that's what it seems like in Crazy, Stupid, Love., which catches the unraveling of a marriage and the life left in its wake, as Cal and Emily (Steve Carell and Julianne Moore) go their separate ways after 25 years of wedded co-existence, spurred by an affair and ennui.

With Cal suddenly cut loose, he is taken pity upon by his fairy wingman, Jacob (Ryan Gosling), who turns him around, cleans him up and teaches him a bit of his own flirtatious skillset, which, until he was recently rebuffed by a beautiful redhead named Hannah (Emma Stone), was a guaranteed ticket to a one-night-stand. Jacob is the Tyler Durden of the dating world, and his aggressive pursuit of something-something would be terribly off-putting if Gosling wasn't so charming, or without Carell serving as his anti-thesis. Together, their mentor-student relationship offers plenty of laughs, with Carell's pursuit of one woman (Marisa Tomei) paying off repeatedly.

Though the interactions between the guys powers the film, they are just part of a brilliant cast. Julianne Moore is her usual terrific self, even if it's hard to feel much for her, even as the film tries hard to paint her as sympathetic. Emma Stone is far more interesting, and her chemistry with Gosling is fantastic, serving as the true, believable center of the movie. People often point to Gosling's performance with Rachel McAdams in The Notebook as a top romantic movie, but this film is far more realistic in its displays of love and romance. One will-they-won't-they scene between the two is simply flawless in its heart and comedy, making it clear who the true stars are (even if there are points where, because of a lack of screentime, you might question just why Stone is in the movie.) And not enough has been said about Liza Lapira, who gets the usually thankless job of being the girl's best friend, but imbues it with such infectious spirit that you just want to see more of her. 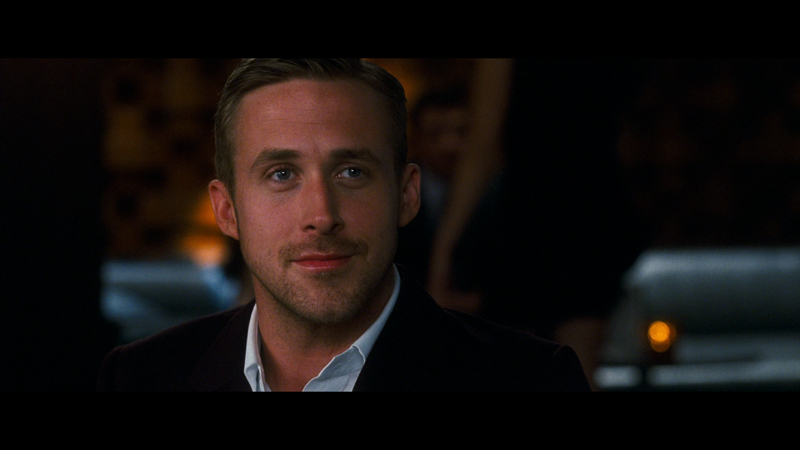 The adults, young and older, aren't the only ones displaying serious acting chops, as the two main kids in the film show themselves to be promising talents. Playing Cal and Emily's babysitter, who is smitten with Carell's good guy, Analeigh Tipton turns in one of the finest examples of an awkward teenage girl seen in mainstream film. A somewhat unconventional beauty (who came to prominence on America's Top Model) she's just perfect for the part as a believable kid dealing with emotions she's not ready for, even if the part eventually takes a detour that's not all that believable. That ties in with Cal's kid Robbie, played with emerging skill by Jonah Bobo, who joins a short line of quality pint-size dreamers more mature than their years. Most of the time that kind of character eventually veers into becoming at the least annoying, but there's such an earnestness in Bobo's performance that you can't help but pull for him.

For as good, entertaining, romantic and realistic as this film is, and it does offer plenty to like, about three-quarters of the way in the film approaches something akin to sitcom-level wackiness , bringing it dangerously close to being disappointing, despite throwing a twist into the story that's genuinely surprising, even if, in retrospect, you think it should have been obvious. After this bit of shock and dismay, it's a bit hard to believe there's another half-hour left, which is where mainstream audiences get the ending they probably want, but maybe not the ending the film deserved. Then again, there's nothing wrong with people being happy and love, crazy, stupid or otherwise, conquering all.

(On a side note, this movie may have set a record for becoming dated, with one scene set in front of a now-defunct Borders book store, while another scene includes a joke about Steve Jobs. Too bad they couldn't have worked in a reference to The Playboy Club and the Microsoft Kin.) 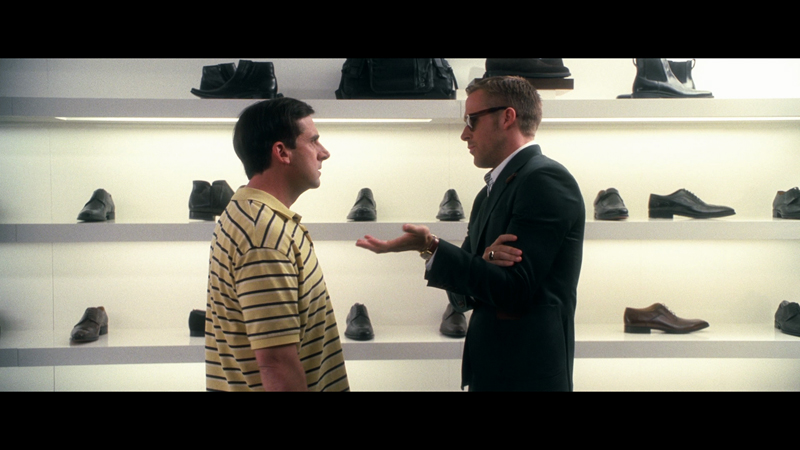 The Discs
Crazy, Stupid, Love. arrives as a two-disc set, which comes in a standard, dual-hubbed Blu-Ray keepcase, which has a slipcover that repeats the cover art. The Blu-Ray disc features an animated, anamorphic-widescreen main menu, with options to watch the film, select scenes, adjust the set-up and check out the extras. Audio options include an English DTS-HD Master Audio 5.1 track, as well as French, Spanish, Portuguese and Thai Dolby Digital 5.1 tracks, while subtitles are available in Eglish SDH, French, Spanish, Chinese (?), Korean, Japanese (?), Portuguese and Thai. (The question marks are because the languages are labeled in non-Arabic characters and the spec lists on the box are wildly inaccurate (indicating, among other things, that there are two separate English tracks.)

The Quality
The 2.4:1 1080p AVC-encoded transfer on this film comes off as disappointing. Though there are moments when it looks really nice, with a high level of fine detail, the image is frequently quite soft and lacking definition, with some odd focus issues that seem to be part of the film itself, while there is excessive noise in places, especially during the darker scenes, of which there are many. The color is where things go right though, as the color looks appropriate across the board (look for any appearance by Emma Stone, whose porcelain skin and red hair and lips offer a distinct contrast to the rest of the film's palette) and the black levels were nice and deep, while the darker scenes avoided looking murky. There weren't any noticeable issues with compression artifacts, but the overall image just felt off.

The English DTS-HD Master Audio 5.1 track doesn't get a whole lot of work, as the film is almost purely dialogue-driven, and it does a fine job of handing that, though it's mainly focused in the center channel. Most of the time, when the soundtrack gets some play, the surrounds kick in, offering some support to the music, but it's nothing overwhelming. This is a case of the audio presentation playing directly to the film's tone, which is mainly understated.

The Extras
For such a successful film, this disc's bonus content is rather slim. with a short pair of featurettes, starting with "Steve and Ryan Walk Into a Bar" (6:30), which has Gosling and Carell chatting about the movie at the film's spotlight bar. The duo has some good chemistry, and both are funny, which makes it enjoyable, even if you don't learn much about the movie. "The Player Meets His Match" (5:34) is a set of EPK-style interviews with Gosling, Stone and Carell, talking about the character of Jacob, and his relationships. Oddly, a few of the interview clips look like they were taped off a television, and are completely off compared to the rest of the material.

There's a pretty big set of deleted scenes, checking in at over 12 minutes, which includes an alternate ending that, while amusing, is possibly more patently crowd-pleasing than what's in the film. It also includes a scene with Lapira, that, if left in the film, might have made her a star on its own. Also, the bits with Cal and Jacob shopping that were cut are hysterical. If they aren't improv, the writer deserves serious credit.

In addition to a DVD version of the film, this release also includes a code for an Ultraviolet Digital Copy, Hollywood's latest attempt to...do something? Unlike the usual trend of digital copies included on disc, this version is all online, and lets you stream the film immediately, along with getting three downloads for PC, Mac and other devices. Well, that should say supposedly lets you since this feature wasn't available yet via the Ultraviolet site. Apparently you have to create separate Flixster and UltraViolet accounts though to use this, which sounds a bit annoying.

Sadly, the excellent theatrical trailer for the film, featuring Muse's fantastic song "Starlight," is not included. 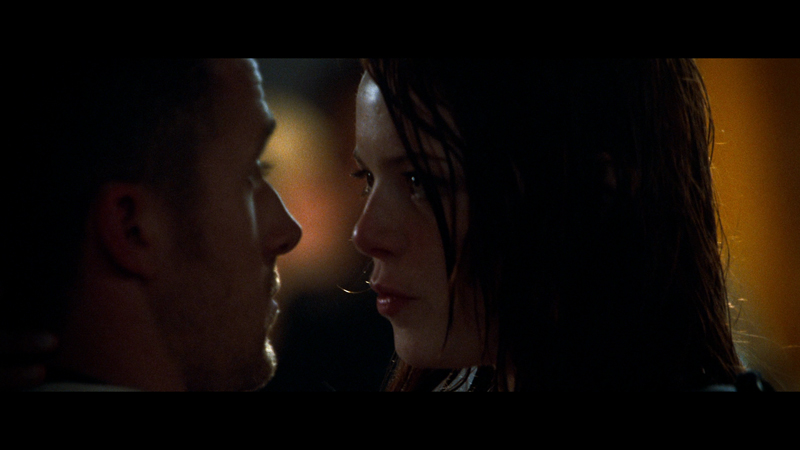 The Bottom Line
Crazy Stupid Love promises to mine laughs from difficult terrain, as the fracturing of a family offers the opportunity to explore the foibles inherent in the game of love, but it manages to find some heartfelt life lessons and genuine romance as well, thanks to a solid all-around production and an outstanding cast. The Blu-Ray looks and sounds good (coming up well short of great) and presents some minor extras (again coming up short) making it a film you definitely should check out, but owning it may not be for everyone.