These Amazing Shadows: The Movies That Make America 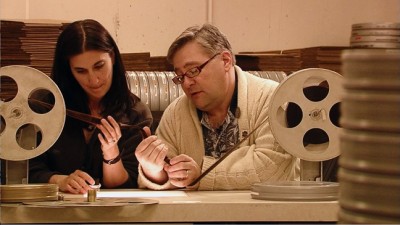 Please Note: The screen captures used here are taken from promotional materials, not the Blu-ray edition under review.

I've said it before, and I'm sure I'll say it again: Thank goodness for John Waters! What, you might wonder, does that sentiment have to do with Paul Mariano and Kurt Norton's documentary on the National Film Registry, These Amazing Shadows: The Movies that Make America? Well, Waters (director of Pink Flamingos, all-around wit, and self-described "carny") is most prominent among a handful of Mariano and Norton's interviewees from the film world who counterbalance the sometimes insular, vague, overly self-inflating tone of the members of the registry's influential governing body, the National Film Preservation Board, who appear and comment on their work with a sense of generic Importance that too often extends to the tone of the film itself. Mariano and Norton's subject is a great one, and in the end, they have done a service to all of us who care about film history and preservation, but it's telling that their film actually needs the countervailing presence of the always pomposity- and hypocrisy-deflating Mr. Waters to save it from being little more than a shiny, happy, empty advertisement for its subject.

The film opens promisingly, with well-organized and briskly cut documentation of Congress's establishment of the registry in 1988, a measure it seems was initially taken as a precautionary measure against crass media mogul Ted Turner's then-rampant, now mercifully forgotten colorization of the many classic films he'd acquired. The congressional mandate: Each year, 25 American films are to be added to the registry after meetings and deliberations convened and arbitrated by the Film Preservation Board, with the stipulation that none of the selections may be less than 10 years old (Fargo (1996) was added in 2006, for example), and that there must be some kind of consensus that they are of cultural, aesthetic, and/or historical importance. The chosen films are then given the full restoration and conservation treatment by the Library of Congress's audiovisual experts in order to ensure their ongoing, high-quality availability for the enlightenment, education, and entertainment of future generations. 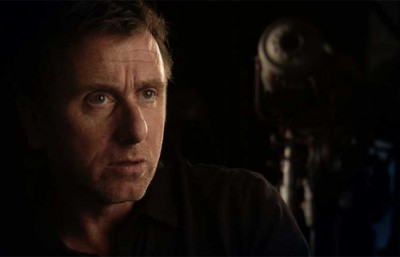 This is work the nobility of which is unquestionable, so it comes as something of a tedious surprise that the film, at its worst, devotes long stretches to reiterating, in unnecessarily overblown and self-aggrandizing terms, the greatness of the National Film Registry's aims. The credentials and qualifications of the several members of the Film Preservation Board who appear (and who take up far too much screen time) are not really specified, but they have the air of wealthy philanthropists rather emptily and vaguely talking up a cause whose glory is important not least for being reflected on them. This tendency to a sort of mawkish and unseemly self-congratulation is compounded by Peter Golub's alternately cloying and bombastic score, which not only intrudes unwanted into too much of the non-clip-based portions of the film, to the extent that its artificial manipulations seem annoyingly pleased with themselves, but--much worse--is used instead of the original soundtracks as we cut to iconic clips from The Wizard of Oz, 2001, etc. (If you have ever wondered what John Williams at his most back-slappingly "rousing" or saccharinely "moving" would have come up with for those and other great classics, here is your chance to find out.) 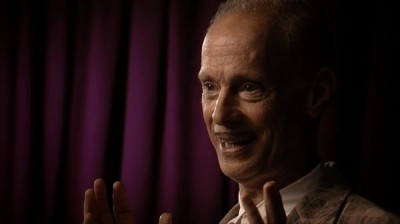 At its best, however, These Amazing Shadows brushes away the airy grandstanding to get at the much more interesting nitty-gritty of the selection and preservation processes. The most involving part of the film takes us into the vaults and workrooms of the Library of Congress's Audiovisual Preservation Project campus with its enthusiastic, knowledgeable, slightly eccentric head preservationist, George Willeman, as our guide and chief instructor on the frightening perishability of film, especially nitrate stock from the earlier days. Otherwise, the group of film critics, industry insiders, and filmmakers Mariano and Norton has assembled to discuss the registry and its selections is a motley, incongruous assortment, but that makes for some much-needed liveliness and shifts in tone. Tim Roth's (Funny Games) puppy dog-like Taxi Driver love and, especially, Waters's irreverence (he loved The Wizard of Oz because he wanted to be the Wicked Witch, and he can't for the life of him understand why Dorothy would want to go back to dreary, straitlaced Kansas) go some way toward compensating for Christopher Nolan's (Inception) predictable veneration of Star Wars and Rob Reiner's eyeball-rolling generalization, based on his appreciation for It's A Wonderful Life, that cinema is great because it's life-affirming. The voice of cinema-as-art elder statesmen like Paul Schrader (Taxi Driver scribe, Affliction director) and James Schamus (Focus Features CEO, Ang Lee's perennial writing partner) add a nice dash of unabashed intellectual insight, and while some of the interviewees are mind-boggling (the inclusion of Zooey Deschanel might be explained by her great-cinematographer father's participation, but that hardly excuses it), the array of voices is wide, inclusive, and lively enough to make for an engaging back-and-forth on the importance of the medium and the conservation of its most pertinent artifacts. 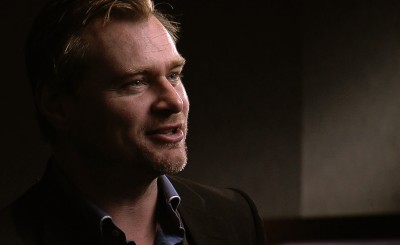 These Amazing Shadows also does a very good job of covering all the different kinds of films that get chosen for the registry--from your obvious Casablancas and 2001s to entirely obscure silents, shorts, documentaries, experimental and industrial films, cartoons, and even that "Let's go out to the lobby" concessions ad of yesteryear--thereby calling our attention to the fact that the registry's project is not so much evaluative as it is analytical, i.e., it applies standards that go well beyond a film's artistic merit and quality to encompass whatever it might reveal about the technical state of the art, cultural shifts and changes, or historical social attitudes (an impassioned segment on the controversial inclusion of Griffith's The Birth of a Nation being perhaps the most memorable example of a work meeting the criteria for inclusion despite being extremely problematic). By the time the film has ended, even though it does conclude on another of its Oscar-speech-sounding, overblown notes, one does feel enlightened, involved, and encouraged by what it has to tell us about the principles and practice of maintaining film as an essential, precarious, easily lost part of a country's cultural heritage. These Amazing Shadows holds legitimate interest for that reason alone, regardless of the feeling that it could have gone at its compelling topic with a bit more seriousness and rigor.


The disc's AVC/MPEG-4 transfer, 1080i and anamorphic widescreen (aspect ratio 1.78:1), brings both the many film clips used (mostly of very high quality) and Frazer Bradshaw's high-definition digital videography flawlessly to your home screen. All those talking-head skin tones stay stable and natural-looking, and all colors/contrasts look good, both in the color and black-and-white clips, with not a trace of aliasing, screen patchiness/pixilating, or other compression artifacts.


The main difference between the disc's two audio options--DTS-HD Master Audio 2.0 and DTS-HD MA 5.1--is the distribution of sound back into the rear speakers on the latter soundtrack, which would be the preferred choice for a surround system. Both options have great audio reproduction (just because the use of an original score was a misguided decision doesn't mean it doesn't sound great!)--full, rich, and clear, with no distortions, imbalances, or any other sonic flaws.


A fairly generous portion of bonus material has been added for the Blu-ray release, including:

--"Lost Forever": The Art of Film Preservation, a 30-minute mini-documentary on the ins and outs of the preservation process, with a history of film from a preservationist's point of view conducted by George Willeman, the preservationist from the Library of Congress's Audio-Visual Preservation Project whom we remember from the feature. There is also a lot of disconcerting information about how much of our film heritage was dumped (literally, into the ocean), burned, or mined for its silver at the hands of crass, short-sighted American profit-mongering and disregard for the past and then had to be begged and retrieved from foreign governments that, thanks to good ol' socialism, had official film-archiving infrastructures in place decades before we ever got around to it. "Lost Forever" also rounds up various film restoration experts and advocates who describe, in fascinating stories from the film-preservation trenches, the details of restoring lost film in terms evoking a quasi-archaeological adventure. Frankly, it is this extra--much less grandiose and much more informative overall than the feature presentation--that really pushes the disc over the top into being worthy of adding to your collection rather than just a casual rental.

--"Live from Prague": Recording the Score, a seven-minute short in which composer Peter Golub recounts the process of creating the film's score. It was a thankless task; he had to create new music to play over scenes, such as those from 2001, that already had music so indelible that to apply a new soundtrack was a fool's errand. But the pointlessness of scoring a film like These Amazing Shadows aside, Golub does offer an interesting peek into the work of movie scoring and, more specifically, the process of working with the City of Prague Philharmonic on the recording.

--These Amazing Shadows at Sundance, five minutes of random footage with directors Paul Mariano and Kurt Norton (as well as various other participants from the film) at the 2011 Sundance Film Festival, holding a post-screening Q&A, posing for photo shoots, etc. It's fairly fluffy, but a good-enough glimpse of the schmoozing involved in presenting and marketing a project like this one.

-Three outtakes, one each with Christopher Nolan, John Waters, and Tim Roth, which are just extensions of their interviews for the film, and rather brief ones at that, but certainly worth the bit of extra time for their more off-the-cuff feel and (at least in Waters's and Roth's case) juicier little comments and revelations.

--A handful of deleted scenes and alternate takes includes critic Mick LaSalle on Gold Diggers of 1933; the favorite National Film Registry selections of various These Amazing Shadows participants; and an alternate version of a montage centered on the Godfather films.


Part rambling puff piece, part invigorating investigation, These Amazing Shadows falls short of being a great documentary but nevertheless succeeds as an important introduction to the history behind and workings of the vital project undertaken by Library of Congress's National Film Registry. When the film is at its most focused, it has the power to convince us that this is an almost utopian endeavor that transcends our differences of taste and the conflicts around our nation's troubled social and cultural history to create a sphere where we can become a united front, standing together in our agreement that preventing the ravages of time from wearing away and destroying the tangible record and cultural heritage that our motion pictures represent is a priority in which we all have a vested interest. Recommended.