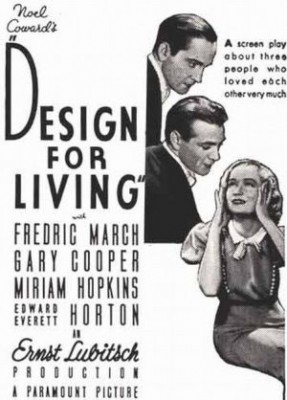 It's strange how, in retrospect and upon reflection, a film like Ernst Lubitsch's 1933 romantic comedy Design for Living seems radical, utopian, and revolutionary while at the same time remaining about as affable and instantaneously appealing and gratifying as practically anything you've ever seen as it crackles with intelligence and wit. It has no social commentary to make, no agenda other than entertaining us and making us smile, yet its approach to matters like love and sex is not just surprising for its risqué, pre-Code open suggestiveness; it's also genuinely mature and wise to a degree that, for all the film's tux-and-gown, finely crafted, only-in-the-movies artificiality and glamor, makes the sensibility of a good many of its present-day, supposedly permissive, more "realism"-bound romantic-comedy equivalents appear prudish, retrograde, and provincial by comparison. 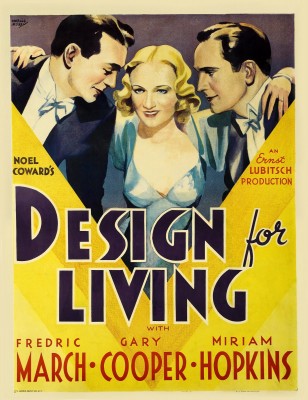 Design for Living's love triangle is comprised of unsold painter George Curtis (Gary Cooper), unproduced playwright Tom Curtis (Fredric March), and commercial artist Gilda Farrell (petite ball of fire Miriam Hopkins), three American expats trying to live the poor but liberated bohemian life in Paris. George and Tom are already bosom buddies and comrades in creativity when the feisty, outspoken Gilda gets their goat (in all the right ways) as the three share a compartment on a long train ride back into the City of Light. Their spirited introductory interchange stimulates them all, and Tom and George separately take the initiative of courting Gilda, working their way past the blocking strategies of Gilda's longtime admirer, Mr. Plunkett (Edward Everett Horton), her boss at the ad agency she designs for. She winds up dating both George and Tom, each without the other's knowledge, and it would seem we are in the midst of what is apparently a conventional love triangle through which, in time, the two men will vie and compete for the woman's exclusive attention. As it turns out, though, Gilda isn't your typical triangle peak, and George and Tom's competitive vying is an unnecessary, ultimately rather foolish waste of energy. 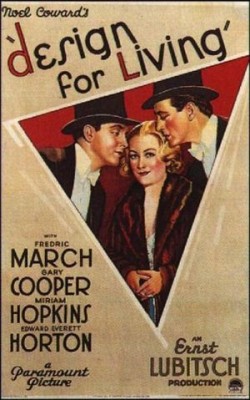 The most memorable, extraordinary scene in a film rife with marvelous banter and Lubitsch's trademark, exceptionally skillful deployment of blocking-, framing-, and montage-created, purely visual humor, comes when George and Tom, having discovered that both are involved in concurrent affairs with Gilda, confront her with the aim of forcing her to choose between them. Gilda's response seems to come unexpectedly even to her: she tells the pals, in metaphorical but abundantly clear terms, that she's a woman of surprisingly far-ranging tastes, needs, and appetites in the romance 'n sex department, and she doesn't see why any pairing off has to occur at all. Can't she, instead, be mistress and muse to both of her talented but undisciplined lovers, setting up house as a threesome in their dusty little flat and bringing out the best in them by distributing her attentions--her motivating, sharply critical eye as well as all the rest of her--between them? This is the "gentlemen's agreement" struck by these three free spirits, and things go swimmingly until, called away to London and a guaranteed huge theatrical success for which he has Gilda to thank, Tom sacrifices his spot on the now-amiable triangle to go after fame and fortune, leaving an opening for Gilda and George to break the trio's pact and get exclusive. When Tom finally returns and it appears that the triangle will once again become tiresomely contentious and combative, Gilda decides to wash her hands of their dream gone wrong and succumb to the dark side (i.e., convention) by embracing the grim fate of marriage to her literal-minded and hopelessly bourgeois perennial suitor, Mr. Plunkett. Will this sparklingly rare specimen of womanhood be consigned to a lifetime of lubricating the lucrative business relationships Mr. Plunkett relentlessly grubs after, playing hostess and endless rounds of 20 questions at his deadly dull dinner parties? Or will George and Tom once again find their way to surmounting their petty rivalry to rescue the love of both their lives from a lifetime of crushing uxorial dullness? 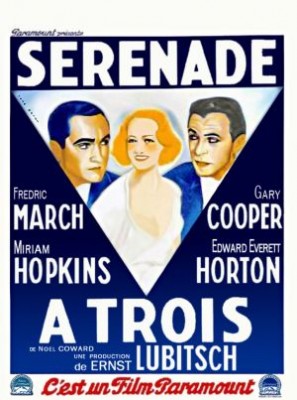 Like any classically-defined comedy, Design for Living (freely adapted by Lubitsch and Ben Hecht from Noel Coward's wildly popular stage play) sets up a happy order, throws it into chaos, and then works its meandering way back to the scenario of happiness and everything being right with the world. But the path it takes is one that has been cleared by Ernst Lubitsch, with that famous way he had of channeling his preternatural grasp of cinematic language into an expression of a uniquely ironic, frequently hilarious, always deeply affectionate view of us human beings and our jumbled-up, contradictory needs and desires. And, perhaps most strikingly, it cheekily turns any standard definition of "chaos" and "order" onto its head. On Lubitsch's, Hecht's, and Coward's terms, shoehorning oneself into ordinariness in a futile attempt to achieve illusory normality, settling down and accepting the dominant definition of success in love and work, is what invites chaos, whereas harmony can be achieved through sexual, romantic, and vocational liberation. George, Tom, and Gilda are most themselves, most happy and fulfilled, when they can pursue their shared commitment to genuinely good work not shackled to concerns of fleeting acclaim and lucre, and to emotionally/sexually honest arrangements, however "loose" they may be, when it comes to matters of the heart. In Design for Living's cheerfully yet profoundly provocative, even subversive utopian vision, it's infinitely preferable to be part of a free, happy, makeshift triangle than to give in to a world made by and for squares. 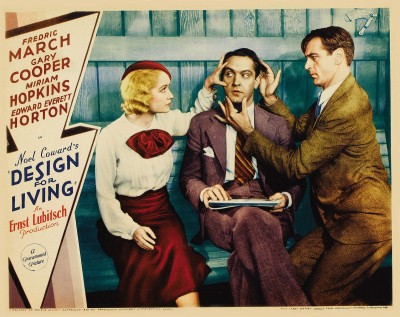 
Aside from one instance of a light(ish) scratch running over the left side of the screen for a few moments near the end of the film, the transfer (mastered at 1080/24p, AVC/MPEG-4 encoded, presented at the original aspect ratio of 1.33:1) is stunning--sharp, smooth, and clear, allowing all of Lubitsch and his brilliant, legendary DP Victor Milner's elegant, beautifully lit black-and-white compositions to practically glow.


The uncompressed PCM 1.0 monaural soundtrack is a wonder; from start to finish, the sound is unexpectedly crisp, clear, and full, particularly in light of the early-'30s vintage of the sound recording. Bravo to Criterion and their technicians for a particularly nice job, even by their perennially high standards!


--"The Clerk", a tiny (just a couple of minutes long) piece by Lubitsch that was his contribution to the 1932 Paramount omnibus film If I Had a Million. Charles Laughton is the titular clerk, one of the beneficiaries of a dying tycoon's generosity. The clip is just an extended gag about the clerk quitting his job, but its deceptively brisk, symmetrically progressing, economical-feeling visuals and montage create a twinkling, chuckle-eliciting effect that's pure Lubitsch; it's a very tasty little bonbon.

--A 20-minute interview with film historian Joseph McBride regarding the collaboration of screenwriting legend Ben Hecht (Hawks's Scarface and dozens of others) with Lubitsch on the film's adaptation of Coward's play. McBride is so knowledgeable on both the historical and cinematic fronts that this segment flies by, packing maximum informativeness and cinematic horizon-broadening into its short running time.

--A 35-minute selected-scene commentary by film professor William Paul that is far-ranging, exemplarily observant, and wise; this piece works more like an extended visual essay--including sequences from Design for Living alongside several from Lubitsch's preceding masterwork, Trouble in Paradise--on an array of topics including Lubitsch's style, thematics, and the serious and meticulous way he created such a deceptively "light" feel in works that actually offer very thoughtful and critical views on received social mores vis-à-vis matters of love, romance, and sex. Viewers could do much worse than to take Paul's powers of observation here as an example for application to any film; his contributions here truly deepen the experience of Design for Living.

--"A Choice of Coward," a 1964 British television production of Design for Living (drolly introduced on camera by Coward himself) starring Daniel Massey, Jill Bennett, and John Wood, affords an opportunity to observe some interesting comparisons and contrasts, both between this dutiful production and what amounts to Hecht's and Lubitsch's free-handed, fairly thorough reworking, and between a filmed (or, in this case, videotaped) play and a truly cinematic work that uses the play as a springboard.

--A booklet featuring an essay by critic Kim Morgan. Full disclosure: Ms. Morgan was a colleague of mine for a while--already an established, admired, and very well-liked figure on the small but lively Portland, Oregon cinema scene when I began freelancing lo these many moons ago--and I think I got to know her well enough to say that her extensively knowledgeable, beautifully articulated, astutely perceptive and opinionated work here was almost inevitable, as she, like Lubitsch, has a sophisticated, playful, witty (and seriously cinema-drenched) sensibility that would make her the appreciator of choice for a film like Design for Living.


At a time when most Hollywood romantic comedies seem to play right into a narrowly puritanical view of sexuality as naughty, unseemly, or gross (regardless of how explicit or graphically crude they might get), the combined sensibilities of director Ernst Lubitsch, screenwriter Ben Hecht, and playwright Noel Coward on display in Lubitsch's Design for Living seem not just modern for their time but, 80 years on, more advanced than where cinema is at today. The film is proof positive that sophistication, dignity, and elegance needn't be stuffy for a moment. Nor, in Lubitsch's nimble, intelligent, warmheartedly droll world, does a film need to be at all heavy or serious in order to be patently grown-up and insightful: A love triangle consisting of two dapper, artistically ambitious gentlemen and one sweet but strong lady is here provocatively presented as something that can just as well be worked with, balanced out, and reconciled as it can be (as is more typical) approached like a problem that demands resolution and reduction, posthaste, down to the conventional straight line. However, improbably for a film that makes such a radical case, it never feels as though it has anything to prove; there is not a single moment of didacticism or defensiveness, just a seemingly effortless, spirited comic flow that nonchalantly plays out the awkward situation with a remarkable proportion of empathy to its sexiness and humor. Unless you consider other Lubitsches (particularly Trouble in Paradise, for which Design for Living is a perfect follow-up and companion piece), it's very difficult to think of another film with a tone this light that actually makes you think and feel as deeply. It's a generous, thoughtful, imaginative treatment of some things--love, sex, friendship, vocation, the pursuit of happiness--that are basic to us all, yet hardly simple for any of us. Highly Recommended.