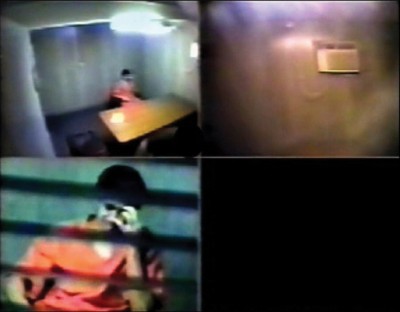 Upon hearing the title You Don't Like the Truth: 4 Days Inside Guantanamo, one presumes it to be some sort of clever quotation from A Few Good Men, the 1992 courtroom drama that centered on Gitmo a decade before it became an international cause célèbre. But it's not; "You don't like the truth" is the desperate cry of Omar Khadr, the 16-year-old Guantanamo detainee whose interrogation tapes are the focus of Luc Côté and Patricio Henriquez's tense and upsetting documentary.

Khadr, a Canadian citizen, was picked up in Afghanistan, where he was accused of participating in a firefight and killing an American soldier and medic. After brutal interrogation and torture in Bagram, he was sent to Guantanamo. In February 2003, he was interrogated over the course of four days by a Canadian Foreign Affairs intelligence officer and an official from the Canadian Security Intelligence Service (CSIS). The tapes of that interrogation only surfaced because of a ruling by the Supreme Court of Canada.

They show a young man who is, at first, hopeful and happy; he believes that these men from his home country are there to help him. Between the first and second day, that hope fades. He has come to realize that they are merely there to squeeze information out of him, and he is caught in a moral dilemma: he told Americans at Bagram what he thought they wanted to hear, in order to stop the torture. Now he is trying to tell the Canadians that those stories weren't true. "Promise me you're gonna protect me from the Americans," he pleads. "Promise me." The Canadians would rather here what he told the Americans, stories of dinners and family celebrations attended by Osama Bin Laden.

The exact truth of Khadr's past, and of what happened in that firefight in Afghanistan, is unknowable. But there is compelling evidence that he knew nothing of Al-Qaeda or Bin Laden; there are equally persuasive arguments that he could not possibly have killed that American soldier. But two things are clear: this 16-year-old was, at the very worst, a child soldier (as defined by UNICEF); and that he was denied not only the legal protections kept from all Gitmo detainees, but the protection of his home country.

"He's a 15-year-old child in a war zone," explains former soldier Damien Corsetti--a brutal and violent interrogator (nicknamed "The King of Torture") who nonetheless could not understand why they were holding and torturing a minor. What You Don't Like the Truth makes clear is that the four days with the unnamed CSIS representative amounted to a kind of psychological torture; at first he is all smiles and candy ("McDonald's or Subway?" he asks, of their meeting the next day. "You want me to bring you a milkshake or something?"), but over the course of the subsequent days he makes vague threats and vaguer promises.

The filmmakers don't tip their narrative had; the story unfolds in front of us, as Khadr's interrogation is intercut with background information from the filmmakers and the various sources they interview: cellmates, psychiatrists, lawyers, military, family, diplomats, media. The daily chapter headings ("HOPE," "FAILURE," etc.) are a bit on the nose, but that complaint aside, the progression of events is tense and riveting--and surprisingly inventive visually. Taking the three-up split-screen composite of the three-camera interrogation tape as a template, the filmmakers use the split-screen method to show sympathetic eyes watching the interrogation video and reacting, sometimes more than one at a time. In a strange, cyclical way, the look of the film is reminiscent of a (fictional, it should be strenuously noted) television show with a markedly different attitude on the effectiveness of torture: 24.

The sole concession to the CSIS for the tapes' release was that they could erase patches of audio deemed dangerous or classified; the occasional on-screen notation of "AUDIO ERASED BY THE CSIS" becomes a chilling reminder that we're not even hearing the worst, whatever that might be. But whatever sound is lifted, those fuzzy, distant images are still starkly unsettling. At the end of the second day, Khadr has what amounts to an on-screen breakdown; the filmmakers do not flinch from the sight of this impossibly young man, all alone in this interrogation room, weeping and moaning for his mother. Later, after the Canadians leave for the last time, the camera keeps rolling on Khadr alone in that room. His lonely form is kept up on one side of the screen, while his cellmates and supporters appear on the other side. It's a potent visual metaphor. Their backing is admirable, but it ultimately doesn't amount to much--he's still there, a solitary man.