Excellent made-for-TV shocker. Warner Bros.' on-line M.O.D. (manufactured on demand) service, the Archive Collection, was made for abandoned movies like The Possessed, the 1977 supernatural thriller from the ABC network, starring James Farentino, Joan Hackett, Claudette Nevins, Eugene Roche, the dewy Ann Dusenberry, and just-a-few-short-weeks-away-from-international-mega-superstardom, Harrison Ford. Reminiscent, certainly, of The Exorcist, The Possessed gets its own seriously creepy little vibe going, with an intelligent script, surprisingly effective special effects, top-notch performances, and a genuinely unsettling, scary ending. How about that for an almost-forgotten little made-for-TV movie? No extras (as expected) for this somewhat rough―but effective―transfer. 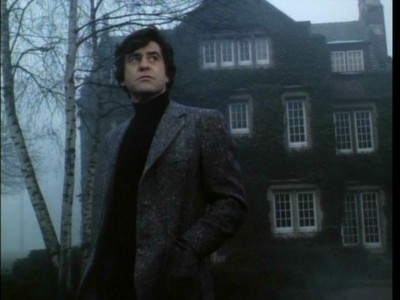 Insanely intense, crushingly handsome priest Father Kevin Leahy (James Farentino), can barely get through communion without fumbling the chalice, so bad are the shakes he's having every Sabbath morning. Having refreshed himself at the altar bar, he promptly wraps himself around a telephone pole one rainy night, and dies. Stuck in limbo, a voice tells him he must seek out Evil and fight it, for that is his soul's only salvation, and zap! he's back in business. Cut to the Helen Page School for (Young, Hot) Women in Salem, Oregon. Emotionally exhausted headmistress Louise Gelson (Joan Hackett) has a punishing overload of worries at the financially-strapped school, including the necessity of allowing young men in next term. Her widowed sister, Ellen Sumner (Claudette Nevins), is grateful for her sister's help in securing a job, but she's worried about her soon-to-graduate daughter, Weezie Sumner (Ann Dusenberry), who appears to be entirely too beautiful, too nubile, too charming―not to mention too sexually adventurous―to exist on this planet with mere mortals like ourselves. Enter into this complicated picture of frustrated dreams and sexual tension the concept of "Evil," and suddenly fires―real fires―start breaking out all over the school...and all over the students and faculty. 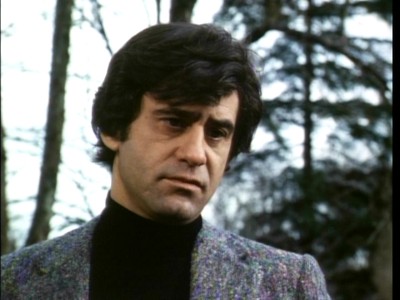 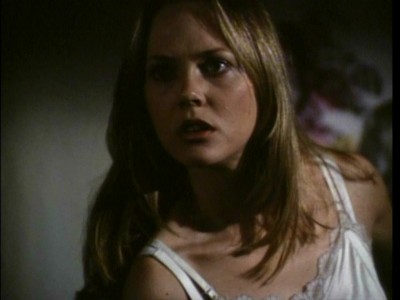 I clearly remember seeing The Possessed way back in '77 and loving it (the sight of Joan Hackett's possessed face gave me the night-time whim-whams), and it plays just as well today. It can be dodgy, going back to an old show you haven't seen in 30+ years, hoping it will hold up, but I've always been a sucker for those Satan's School for Girls movies anyway, so I was pretty sure I'd at least get my subgenre jollies out of this one...especially when I saw that luscious Ann Dusenberry was in the cast (she cries so pretty, just like Susan Blakely). 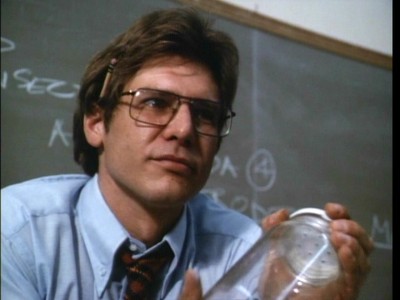 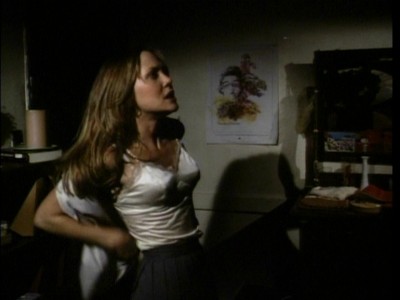 While I retained some of the scarier moments of The Possessed, I didn't remember how well thought-out and serious it was, from its sinister, threatening atmosphere, its thoughtful scripting, its spot-on performances from the first-rate cast, to its effective, sometimes frightening direction. After The Exorcist hit big in 1973, scores of supernatural imitations flooded both the big and small screens, with The Possessed being one of the more successful examples. Certainly any fan of Friedkin's masterpiece is going to recognize parallels here in The Possessed, with the central storyline―a brooding, handsome (ex)priest comes to banish evil―being the most obvious. And you could probably make a good case for The Possessed borrowing a little bit from the then-recent big screen hit, Carrie, with its pyrotechnical mayhem a potent visual steal. What's fun about The Possessed, though, is the clever set-up through John Sacret Young's (Chandler, Testament) script, of priming the viewer for a visitation of Evil on the sins of the faculty and student body of the Helen Page School for Girls, before the rug is yanked out by Farentino, who tells a guilty Dusenberry (who was sleeping with Ford before he's barbecued) that Evil just "is." It exists for its own sake (just as Good must then do), and it doesn't necessarily come as a result of our petty little sins. Young's script, under the taut, atmospheric direction of Jerry Thorpe (Smile Jenny, You're Dead, Kung Fu) takes its time in creating a subtly menacing mood of frustrated ambitions (Nevins), repressed sexuality (Hackett), corrosive sexuality (Dusenberry), and perverted, controlling sexuality (Ford), at the appropriately gloomy, fog-enshrouded Reed College in Portland, Oregon, priming the viewer to sit back smugly and say, "That's right! You get burned up for being a sinner!" before tortured Farentino disavows you of that relatively small-minded notion. Evil just "is," and it can come anywhere, at any time, to anyone. 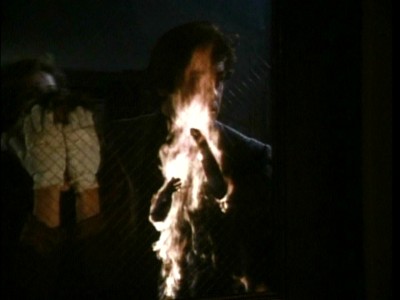 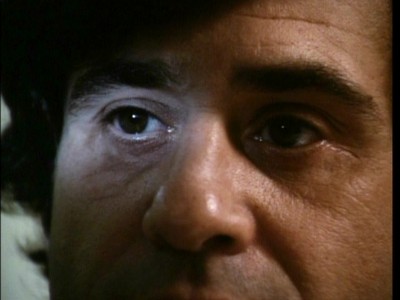 Even better, Young's script gives the viewer no guarantees that ex-priest Farentino can succeed. When asked if he can "win" against this force of evil that is burning up the students and teachers of the school, he simply and fatalistically states, "I don't know." Farentino's character is attractively vague here; he doesn't seem to know what he can do about the situation any more than we do. He says he's no longer with the church, and yet he seems to have powers that, in the end, effectively counter the schools' visiting evil. Is he really an angel, having died in that opening car crash? Is he possessed himself, seeking to battle his own demons by rooting out others? The script is nicely hazy about this, further unsettling the viewer. 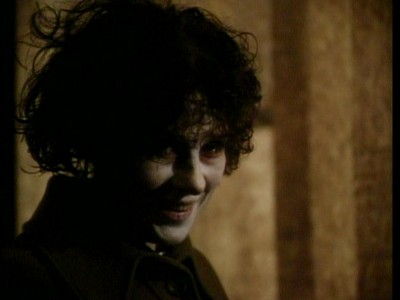 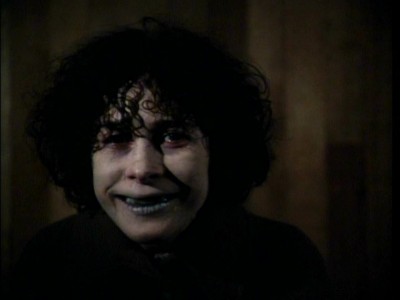 Thorpe's direction is quite adept in getting across this indirect meditation on evil when detailing the lives of the unhappy people at the school, but he's anything but indirect when it comes to The Possessed's effective fire scenes and the final possession of Joan Hackett's character. I liked how Thorpe was clever enough to matter-of-factly show the fires begin, with no ominous, overripe portents to them (Ford's sleeve igniting before we even realize it is a good example), giving us TV-friendly pay-offs that were still quite nasty (watch the reflection in the window of Ford's body burning away as his arms fold in on themselves, like those self-immolating Buddhist monks). As for the finale, it's beautifully creepy. Hackett, now in full possession by the unnamed Evil, walks through the halls of the school, her make-up a ghastly approximation of her now-corrupt soul, before she takes on Farentino, making unnerving Exorcist-like sounds and squeals and groans, before she spits nails (!) and water (or is it bile, or urine?) at him in slow-motion. Thorpe, with the aid of surprisingly effective make-up and special effects, as well as Charles G. Arnold's scary cinematography, shoots all of this head-on, in slow-motion close-up, with an admirably straight face. Farentino's brooding personality is perfect for this kind of role, while Hackett again shows what a skilled, complex performer she was, giving her character layers of unspoken torment that further deepens the piece. Familiar faces Eugene Roche, excellent as always, and Claudette Nivens, are equally adept at suggesting more than what the script has them say, while the real surprise here was Harrison Ford. Playing a thoroughly corrupt teacher who not only enjoys scaring his students to "teach" them, but then beds the more attractive ones―along with any stray faculty members―Ford excels at creating a morally-bankrupt opportunist who's thoroughly unpleasant. He's terrific as a sly, creepy bastard here; it's a shame that the release of Star Wars just a few weeks after The Possessed premiered in 1977, would cement his predominantly "good guy" leading man status for the rest of his career, drawing him further away from more intriguing characters like this one. 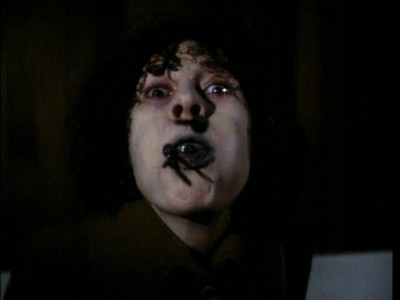 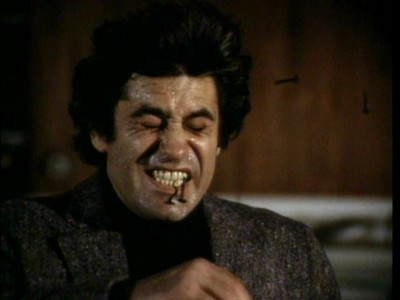 The Video:
The full-frame, 1.33:1 transfer for The Possessed is soft, and quite dark and grainy...but it works for this story of evil. It's apparent the original materials used for this transfer have suffered (and I'm pretty sure ABC wouldn't have put on the air something this dark and nasty-looking back in 1977), but all in all, those sub-par elements actually work in the movie's favor, strangely enough.

The Audio:
The Dolby Digital English mono audio track is effectively re-recorded at a strong level, with dialogue and sound effects heard clearly.

The Extras:
No extras for The Possessed, unfortunately.

Final Thoughts:
Extremely effective made-for-TV supernatural horror film. The script and direction take this familiar story of possession and evil and deliver it back to us head-on, with a straight face, and with an air of mold and perversion and frustrated ambitions that gives The Possessed an edge over other Exorcist knock-offs. Terrific cast, effective atmosphere, and a genuinely scary finale. The little-seen The Possessed comes highly, highly recommended.