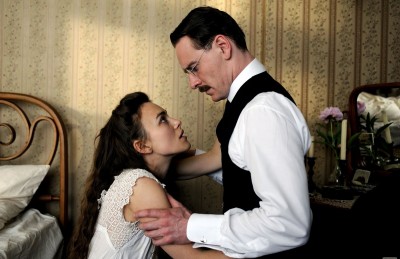 David Cronenberg's A Dangerous Method is a film that grows upon reflection; even considering the filmmaker's more austere recent efforts, it is a picture that the viewer keeps waiting to ignite, and never quite does. But it nestles itself into the mind, where its quirks and complexities continue to reverberate long after the credits have rolled. The filmmakers clearly could have chosen to shoot the works, to ratchet up the raunchiness and high drama; instead, the picture is drawn in finer strokes, and its closing shots cause the viewer to reevaluate all that has come before. It is not the film you expect, but it sticks with you.

And it has, at its center, a performance by Keira Knightley that is astonishing in its depth and power. She opens the picture with a howl, a sustained wail of despair and discomfort as her Sabrina Speilrein is brought to the madhouse, where she becomes a test case for young Carl Jung (Michael Fassbender) and his Freud-inspired experimental treatment, "the talking cure." There will be no surgeries and no electroshock--"just talk." Even the acting of talking is a trial for Speilrein, and Knightley's work in these early scenes, as she wrenches the words out of her character's mouth in jutted stutters and tortured bursts, is remarkable. It's not what you would call a subtle performance (nor should it be, all things considered), but there are subtleties to it: the sparseness of her movements when she's seated in their sessions (the camera regards her as Jung does, from behind), the way her dark eyes flash with fury.

Her treatment is a success, and Jung soon finds himself keeping the company of Sigmund Freud, played by Viggo Mortensen in a performance that almost become the film's dry comic relief; a cigar ever-present between his teeth, the actor manages, at one point, to get a laugh merely with a well-timed "Ah." Freud sends Jung a problematic therapist-turned-patient, Otto Gross (Vincent Cassel, sporting an impish grin), who delights in detailing for the good Dr. Jung exactly how he seduces his patients. This is inopportune timing for Jung, who finds himself powerfully drawn to the charms of the cured Sabrina. "Do not pass by the oasis without stopping to drink," advises Otto sagely.

We can feel director Cronenberg getting a little impatient in the lead-up to Sabrina and Jung's dalliance--this is what he's most interested in, and frankly, so are we. But even in those early scenes, the simmer before the rolling boil, Cronenberg's direction is precise and studied without being suffocating, and he finds every exploitable angle in Christopher Hampton's witty, literate, and highly quotable screenplay. This is an expert filmmaker in total control--of the surprisingly expansive timeframe, of the considerable emotional turmoil, of the psychological texture in the narrative. The rivalry between Jung and Freud brews slowly and sensationally, as jealousy and sex and mental stimulation all get bound up with each other.

Knightley's in not a one-trick performance. Once she is "cured" (after a fashion, anyway), she peels away the tics while maintaining her earlier intensity. There's a fierce eroticism in her work that nearly overtakes the picture; the way her eyes burn when she listens to Jung talk about monogamy nearly sends the whole scene into the stratosphere. Fassbender, meanwhile, more than measures up--for most of the running time, his is a crisp, measured piece of work, choosing to show only the cool, hard surface, but in the third act, he cracks that surface elegantly. For that matter, so does the film. A Dangerous Method is not quite the scorching bodice-ripper promised by the ads. But the good news is, it's more interesting than that.