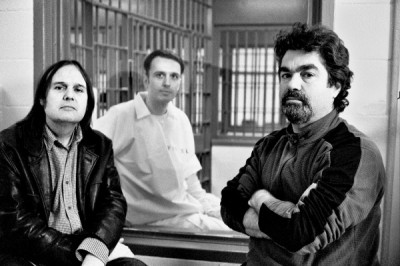 The long, strange, horrible story of the West Memphis Three finally comes to a close in Paradise Lost 3: Purgatory, Joe Berlinger and Bruce Sinofsky's final chapter in the documentary trilogy that, after 18 years, released three innocent men from prison and saved one of their lives. Not since Errol Morris's The Thin Blue Line has a documentary film so directly impacted the judicial system, and even Morris's masterpiece didn't muster up the kind of relentless public outcry as the continuing saga of Damien Echols, Jason Baldwin, and Jesse Miskelly, who spent nearly two decades behind bars for the brutal murders of three Cub Scouts in West Memphis, Arkansas.

The first quarter of Berlinger and Sinofsky's new film is primarily background and catch-up, helpful for filling in viewers new to the story and refreshing those who saw its HBO documentary predecessors, Paradise Lost (1996) and Paradise Lost 2: Revelations (2000). The filmmakers then move on to the birth and growth of the movement that followed, with thousands of online supporters and outspoken celebrities joining in the fight to overturn the convictions of the three young men--a fight thwarted at every turn by the state of Arkansas, particularly Judge David Burnett, who not only presided over the original trial, but every single motion and appeal. The primary focus of Paradise Lost 3 is the events of the past four years, in which new evidence came to light that not only seemed to prove the WM3's innocence, but pointed the finger to another feasible suspect.

Intermingling footage from the first two films (shot between 1993 and 2000) with new material, Berlinger and Sinofsky (and editor Alyse Ardell Spiegel) move nimbly through the years--they know this material inside out, having lived with it for nearly two decades. The frequency and repetition of the on-screen text may irritate some, but it's necessary; the story is such a mass of names, relationships, and dates, popping across such a wide-ranging chronology, that the supers help even plugged-in audiences keep everything and everyone straight.

The juxtaposition of old and new footage (even within specific scenes, like an archival clip of Jesse calling his dad that suddenly jumps to the present) is decidedly poignant. We are, at first, somewhat shocked by the transposition of the little Jesse Misskelly of the '90s with the hardened, swollen, and tattooed man we see behind the jailhouse glass now. In following the story for so long, we've been given the opportunity to observe the adults they've become--in that way, these films are almost like a dark version of the Apted Up documentaries. We're particularly struck by Echols, the member of the trio consistently toughest to get a read on; he has developed into a thoughtful and intelligent young man who can say, without irony or bitterness, "in a lot of ways, I have a truly incredible life."

Perhaps the most peculiar and problematic figure of the first two films was John Mark Byers, stepfather of one of the victims, who often seemed to be reading from a prepared script in his fire-and-brimstone damnations of the trio. Convincing theories were floated, mostly in the second film, that he might have been the true culprit. When the DNA evidence is finally released, basically clearing the West Memphis Three (and, not incidentally, Mr. Byers), he does an astonishing about-face and comes to not only believe in their innocence, but to crusade loudly for their release. (Shockingly enough, it is his voice that we find ourselves agreeing with during the film's epilogue.) His is a character arc that might be tough to swallow in a fiction film, but it infuses this one with genuine, unexpected pathos.

The legal and investigative angles, meanwhile, are expectedly dense and startling, from bombshell information about the misconduct of the original trial's jury foreman to riveting footage from the deposition of Terry Hobbs, the new object of suspicion in the case. But as with the previous films, it is the human angle that sears itself into our memory--that of the grieving parents of the three murdered boys, and the families and friends of the three young men who lost years of their own lives due to what amounted to a witch hunt. There are real emotional moments here, like Byers reading the letter Echols sent him after his conversion, or the embrace between Echols and Baldwin at their closing news conference. Those scenes are why this story became the sensation it did: because Berlinger and Sinofsky never treated their subjects like a cause or an abstract. They were real people, all of them, the victims and the accused, and they were all suffering. In Paradise Lost 3: Purgatory, we are given some comfort by the knowledge that some of that suffering is over, while the tasteful dedication after the fade to black reminds us that some of it will never end.

(Side note: as has been noted elsewhere, the film was nearly complete and being prepared for its Toronto Film Festival premiere when the events of last August, which changed the ending considerably, occurred. The filmmakers elected to finish the picture as it was for that festival, and are now premiering the final version, with its new epilogue, at NYFF. Just one complaint: they have made the strange choice to not alter the original, pre-epilogue titles, which mention "the upcoming trial" and "the new hearings, scheduled for December 2011," which were all negated by the August deal. Why they chose to leave those titles intact is anyone's guess, but they should fix that before the film hits HBO.)