Skin I Live In, The 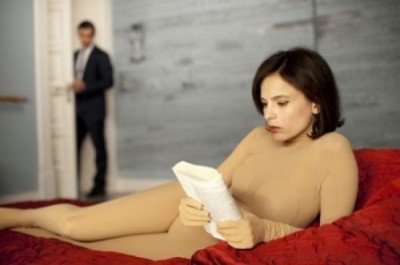 "Well, this is a peculiar film," I thought to myself, as Antonio Banderas began taking the dildoes out of their case and arranging them by size on the dresser. And indeed it is. In this, the latest from Pedro Almodovar, there is (as with so much of his work) a vague feeling of displacement from its opening scenes forward; if you've not seen all of his films (and I have not), these later pictures can feel like a play that you've wandered into at intermission. The style, the world he's established in his twenty-some films is recognizably his own--there is no doubt, for a frame of The Skin I Live In, that you are watching "un film de Almodovar."

The opening shots are a flurry of masks and gloves and body suits, tight close-ups of the paraphernalia of medical experimentation, not much in the way of explanation. Banderas is Robert Ledgard, an esteemed plastic surgeon who is working on developing an "artificial skin." He appears to be holding a woman, Vera (Elena Anaya) hostage in his home; she is kept under lock and key, her food and supplies sent down to her via dumbwaiter. She is astonishingly beautiful. "I know you look at me," she purrs at him, and he does; her surveillance camera is connected to his giant television, where he can zoom in on her exquisite face. There is a push and pull happening between them, but no one's motives are yet known. We're still trying to puzzle all that out when the guy in the tiger costume shows up, gags his mother, and starts knocking on doors.

Almodovar's technique here is to keep us narratively off-kilter but aesthetically satisfied, and he provides the lush colors, slick production design, and beautiful people that we've come to expect. We may not know what the hell is going on, but it sure is pretty to look at. The Skin I Live In has been diagnosed in countless reviews as the Spanish filmmaker's homage to Hitchcock, and on the surface, that's true enough; you can hear it in Alberto Iglesias's gloriously, almost deliriously over-the-top score, and you can see it in the dirty kick of certain scenes that alternately call to mind Hitch and his cinematic pupil, Brian DePalma.

But the picture is just too damn strange for those comparisons to hold water; Almodovar lets his narrative get out of his control in a way that those filmmakers seldom did. He takes an interesting structural strategy, basically starting out in the middle of the story, then taking the second act to catch us up (at one point, from two different points of view). It's a risky storytelling gamble, and one that doesn't always pay off--he certainly keeps you guessing, but we get the unnerving feeling, at times, of merely having our chains pulled.

Banderas turns in an arresting performance. It never feels like he's concealing anything, but he's never showing you much either; there's an opacity to it, but he lets the mask slip, just so, for just long enough. Anaya is astonishingly good, at least in the moment (a second viewing would be required to fully appreciate what she does in the first half), and her final scene is 12-level chess acting. She manages to stifle the potential for audience giggles by playing it with utter honesty.

Those giggles pop up now and again anyway--this is, after all, a film that includes not only the required "You're insane!" but a colorful cousin, "I've got insanity in my entrails." What Almodovar does here, and has done before, is to tell a rather preposterous story with both a straight face and a wink. He's serious yet sly, maintaining a sense of humor but not indulging it. The Skin I Live In is not one of his best films--it's too wobbly and uncertain, and the second hour drags. But it's not easily forgotten, that much is for certain.