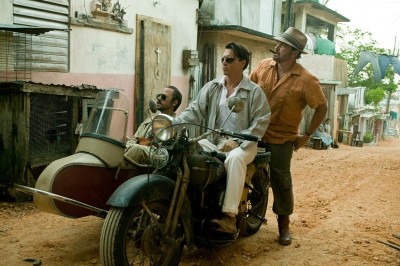 It probably shouldn't come as a surprise that Bruce Robinson's The Rum Diary is such an unruly picture--it is based on an early novel by Hunter S. Thompson, after all, and he's played here by Johnny Depp, who filled the Thompson role in Fear and Loathing in Las Vegas. Of course, if you're going to be literal about it, Depp is playing journalist "Paul Kemp," just as he was playing journalist "Raoul Duke" (also the name of Thompson's Doonesbury avatar) in Fear and Loathing. But there's no doubt, in either role: he's playing Hunter S. Thompson, from the hard-drinking disposition to the growling, clenched-teeth diction. (It's already in place here, as if prepped for the cigarette holder that he hasn't yet acquired.) Fear and Loathing wasn't exactly a model for discipline, either; it was wild, all over the place. The difference between the two pictures is that in the earlier adaptation, that lack of control appeared to occur by design. This time, not so much.

The setting is Puerto Rico, 1960. Kemp is the new staff writer for the San Juan Star, a failed novelist taking a shot at daily deadlines--first as a fill-in man, grinding out horoscopes and bowling stories, quickly moved up to crime and politics. He's doing the work, but he's struggling; "I've got no voice," he moans. "I don't know how to write like me." At the newspaper, he quickly finds a drinking buddy in staff photographer Bob Sala (Michael Rispoli), a philosophical enemy in editor Lotterman (Richard Jenkins), and a cautionary tale in reporter Moburg (Giovanni Ribisi), whose mind has gone to mush after too much time spent in the company of domestic spirits.

His writing is quickly noticed by Sanderson (Aaron Eckhart), a reporter-turned-PR-man doing the bidding of big business interests looking to make a fortune on a nearby island with tourism possibilities. He offers Paul some hack work; Paul is less interested in Sanderson's connections than his girlfriend Chenault (Amber Heard). He falls in lust with the stunning blonde, and you can't blame him. "Why did she have to happen?" he wonders after their first meeting.

Screenwriter/director Robinson (Withnail & I), making his first film in nearly two decades, knows how to have a good time onscreen, how to drench the screen with local color and atmosphere (the carnivale sequences are exhilarating), and the picture is handsomely mounted--full of sunny beaches, slick cars, and crisp period costumes. He tosses in flashes of the expected surrealistic imagery (the rum bottle bowling is a nice touch), and builds his individual set pieces well.

And he orchestrates his actors smoothly. Depp's Kemp--though entertaining, and blessed with Thompsonesque laugh lines like "Christ, this is heinous; imagine what it must be like to be an alcoholic!"--rather disappears into the background behind the rich, juicy supporting characters that Ribisi, Jenkins, and the eternally underappreciated Rispoli chomp into with relish. Heard, as the bad girl tease ripened in the tropical sun, is wickedly tempting; she's got a scene dancing sultrily to a tough blues riff that is so hot, it melts the lens.

But when the picture turns serious in the third act, it's to its own detriment, and Robinson's odd choices about what to show and what to leave out get more and more peculiar. Why wouldn't we want to see Kemp's late night search for Chenault? Or what happens after she turns up at his door? The final turn of her character is altogether inexplicable, a giant chunk of off-screen action that is the film's most glaring narrative oversight, and the sloppy wrap-up text ends the film on a bewildering note.

For all of its cackling energy, The Rum Diary is oddly rudderless. It serves as a marginally interesting origin story for the Thompson persona, which grows to understand the need to speak "in a voice made of ink and rage," but that's not quite enough to justify the expenditure of our time. The film was reportedly a passion project for Depp, who spent years trying to get his late friend Hunter's book made into a movie. Now it is one. Whether it really needed to be one is another matter altogether.