In the new era of sports, economics factor into many decisions that teams make to field a product that is both successful and cost effective. When dollars do not figure into the mix, trying to find irregularities in the system and using those irregularities to the best possible advantage may be the next best thing. Such was the case of Moneyball, the dramatization of the plight of the Oakland Athletics baseball team of the early 2000s.

Steven Zaillian (American Gangster) and Aaron Sorkin (The Social Network) wrote a screenplay from the Michael Lewis book, and Bennett Miller (Capote) directed. Brad Pitt (The Tree of Life) plays Billy Beane, General Manager of the Athletics (or "A's"), fresh off a postseason elimination by the New York Yankees in 2001. Not only did the Yankees have more resources at their disposal, outspending the A's by almost 3 to 1 in terms of team payroll, the A's faced the departure of their three most talented players, some of whom were going to similar teams who could spend more than the A's. Such is the burden of working for a team in a so-called "small market" versus the "large markets" of Boston, New York and St. Louis. After a visit to another team's GM leaves him without his desired assets, he notices something unusual in the room, and it's the sight of a bookish young twenty something, whispering things to an assistant that would eventually vote a proposed deal down. The man Billy sees is Peter Brand (Jonah Hill, The Invention of Lying), an Ivy League graduate who majored in Economics and on the surface would appear to have no discernible baseball acuity to speak of. However, Peter examines the statistics of baseball players and feels that the tendencies that are borne out could prove to be beneficial to a team while spending less for comparable players. This strategy when thrown in front of Billy's scouting team proves to be detrimental. The scouts, who have watching thousands of baseball games through their decades of experience, but often times use intangibles to help determine whether a player will be a success in the Major Leagues or not, even on something as random as the attractiveness of a prospect's girlfriend. Billy's newfound strategy also rankles his manager, a longtime player turned manager in Art Howe (Philip Seymour Hoffman, Jack Goes Boating). We witness how the 2002 A's season plays out, including the lows, highs and everything in between. 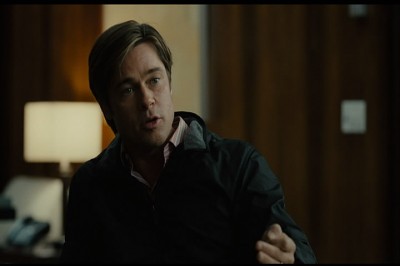 Everything that I had heard about Moneyball in book form was that the material was fairly stats-heavy and as a result was dry and perhaps difficult to translate into a movie. Perhaps this difficulty that was one of the reasons why Steven Soderbergh had pulled out of the film's production. The story however, does a great job of developing an instant conflict and personal chord with Beane, and that was the promise that Beane had shown as a youngster growing up in California. He had the opportunity to go to Stanford and continue to develop his craft, but decided to sign a contract with the New York Mets. Beane's skills flattened out at the Major League level, and he was quickly overshadowed by then-youngster Darryl Strawberry's skills, and soon Beane found himself bouncing from club to club, eventually giving up on the sport after playing parts of six seasons in the Majors. Seeing scouts saying some of the same things about players now as similar ones did around his dinner table almost two decades before, combined with the environment he found himself in, compelled him to do something, anything in order to keep his head above water.

Both Miller's direction and Pitt's performance in the film are top notch, but to examine Miller's style for a minute, the film employs a lot of archival film to help paint the picture without blowing a lot on baseball scenes. There is some game action replayed, though it's not excessive because of the old tape (and as we learn in the supplements, the players for the film were also shot on video to help smooth the gap in likenesses between athletes and actors). In addition, there are many shots of Beane doing nothing, and of the players as well. I don't know anything about Miller's passions, specifically whether or not he is a baseball fan, but he seems to set the pace in a way that mirrors the game to a small degree. There is some patience that should be employed, and some breaks don't necessarily go your way, but when they do, they do in a big way for the 2002 Oakland A's.

As for Pitt, his work in the film is quietly adept. Most of the promotional material in the film shows him sitting down (in empty seats at the ballpark, in his car), watching games (on television, occasionally in person), but there is something that is convincing in what he does, partly because he is hard to pin down. As a General Manager, the tendency in the occupation would appear to be one of moving forward, never trying to spend too much time on the current product and relying a bit on the supporting staff to help in filling in pieces and when dealing with his 29 other peers in Major League Baseball. All the while Beane attempts to engage in clandestine talk designed to get the most back without parting the least in terms of assets. Even while watching his team experience a winning streak of record-breaking proportions, almost immediately Billy is looking past it. He thinks (and maybe rightly so) nobody cares if you win 20 games in August and September if you do not win the last game of the season. With all of Billy's looking forward, he seems to forget the forest for the trees to some degree. Sure, his approach seemed maverick at the time, but he seemed to not realize that many of the same voices of dissent adopted his practices shortly after seeing the success that he accomplished. Even more so, the logic used in spotting flaws in the system appears to have translated over in other sports where statistics are more abstract, such as hockey and soccer. In a world where derivatives abound, Beane should still be flattered by the imitators out there.

Pitt's supporting cast also brings their games to the table as well. Hoffman is, well, Hoffman, and can be relied on to turn in an excellent job, but the main interactions Pitt's character has is with Hill (Billy hired Peter to be part of his staff in Oakland), and Hill holds his own surprisingly well. In an environment where Peter's character is an outsider, he keeps to himself as much as you would expect, and only speaking out when given the trust and confidence to do so. I would be interested to see what he could do with some more time on a drama. Along the same lines, Chris Pratt (Parks and Recreation) plays Scott Hatteberg, one of Beane's 'prized acquisitions,' with a mix of introversion and comedy that works well for the character. 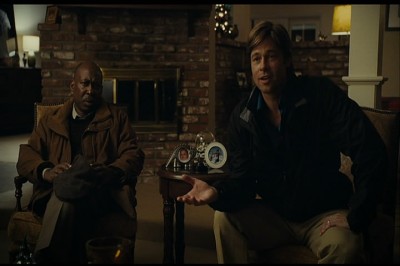 There are some moments that do stretch the skin of believability (the second and third act where Billy and Peter are more prevalent in the clubhouse combined with Howe's virtual non-existence in them seems a bit heavy handed). However, even with coming into the film with a solid idea on what it was about, Moneyball exceeded my expectations, and helped use human moments to illustrate what about baseball we love and hate, and is gripping and emotional experience that was a treat to watch for reasons that go beyond the diamond.


Presented in 1.85:1 widescreen and using the AVC encode, Moneyball looks fantastic on Blu-ray. Image detail abounds, whether it's facial pores and imperfections (yes, really) on Pitt's face in close ups, or more textural things like wood in the clubhouse or the concrete at Oakland Alameda Coliseum or Fenway Park (near the end of the film). Flesh tones look accurate and black levels look strong throughout, with some minor fluctuations near the end titles. The source material is as clean as can be, and the overall result when watching the Blu-ray is superb.


DTS-HD Master Audio 5.1 surround, a.k.a. the norm for Columbia/Sony titles. The soundtrack isn't called upon to be a sonic dynamo, but it handles everything well. Dialogue is consistent throughout, and while low-end fidelity isn't abundant, it fills in when it has to. Directional effects ambient noise and channel panning are abundant, and the level of immersion is more than convincing. When watching the film I set it and forget it, as the consistency and balance were exquisite.


A few extras here, more than I was expecting actually. Looking at the Blu-ray exclusive material first, "Drafting the Team" (20:51) serves as the casting featurette for the film, featuring interviews with the cast and crew on the appeal for the material to them. Stephen Bishop, who plays David Justice in the film, had met the player several times in the years before appearing as Justice in the feature. The cast share their thoughts on the parts and Miller talks about his opinions of the cast as well. Next is "Adapting Moneyball" (16:33), which covers more of the personal attraction by the cast and crew. It also shares what they think the story is about and how Zaillian and Sorkin's screenplay drafts were massaged into one script. The additional extras are nice inclusions. 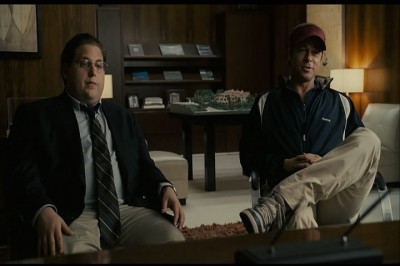 Covering the extras on both discs, three deleted scenes (12:05) are more on the extended/alternate side, with one scene teasing a romantic subplot for Pitt's character. Strange scenes to be sure. A blooper (3:11) includes Pitt cracking up at the film's emotional sequence. Going forward, "Reinventing the Game" (16:02) is a piece covering Beane's impact on the game and his experiences at the time when he was putting it together, and Lewis talks on how the time was put together in a book. On a random note, what the hell is Alex Rodriguez (a non-Oakland player) doing here? "Playing the Game" (19:28) shows us MLB's participation in the film and their participation in making the clubhouses, uniforms, and everything else look authentic as possible. Production and costume design is discussed, and the visual style for the film is even shown. Of the featurettes, this one may be the best. There is a trailer for the upcoming MLB video game called the show (1:21) which follows. The package also comes with a standard definition copy of the disc and the digital/streaming copy (via proprietary technology called 'Ultraviolet') where you can view it at your convenience.


Moneyball achieves a sweet spot of sorts is that it appeals to more people than those who follow the baseball backdrop the film provides. The quest to create and implement substantive change in the face of more than a century of traditional thinking goes beyond the limits of the book and provides a connection that is the cause for its popularity and praise. With solid performances and a gorgeous presentation, the film deserves to be seen by those who haven't and seen again by those that have.