Other F Word, The 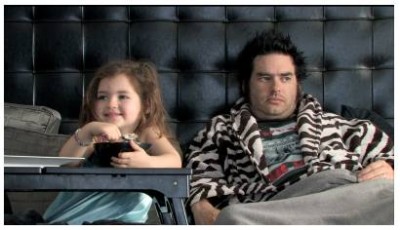 "I'm up here trying to be a good lead singer of a band and a good dad at the same time," says Jim Lindberg, of the venerable punk band Pennywise, "and you worry that you're doing a bad job at both." This is the conundrum faced by all of the tattooed, pierced, hard-rocking family men at the center of The Other F-Word, an entertaining and thoughtful new documentary from filmmaker Andrea Blaugrund. She looks at a handful of musicians--including Flea from the Red Hot Chili Peppers, Ron Reyes from Black Flag, Lars Frederiksen from Rancid, Art Alexakis from Everclear, and Mark Hoppus from Blink-182--who are attempting to intermingle two seemingly incongruent ethos: punk rock and responsible fatherhood.

The film is steeped in history; Blaugrund gives us a keen understanding of what was happening in music (and in American youth culture) when punk hit, what it was about, and what it meant to these guys. Via testimony and clips (including some from the invaluable, too-long-unavailable Decline of Western Civilization), the punk scene--particularly the West Coast iteration of it--is invoked and (as much as it can be) explained. Some of these guys were a part of that initial movement, in those bands, or idolizing them, or taking inspiration from them to start bands of their own.

Chief among the film's subjects is Lindberg, who ends up getting most of the focus. That's a good thing; he's a candid, smart, and funny guy. Father to three girls, he is seen interacting with them at home and dreading each of his band's tours, which are getting longer and longer. (He packs the markedly un-punk essentials: antacid, hand sanitizer, hair dye.) "It's tough to be a punk rock hero and still be an authority figure to my kids," he notes, and Blaugrund enjoys those contradictions; she crosscuts from Lindberg's non-stop onstage profanity to him reprimanding his daughter for saying "turdface."

The tension between their personas and their lifestyles provide much of the picture's entertainment value, particularly since most have such an acute grasp of the situational absurdity. Hoppus chuckles about buying the clean versions of his albums, so that he can listen to them in the car when driving his son around. Flea's daughter recalls a teacher and other students being vocally alarmed by the scary looking guy lurking in the hall--who turned out to be her old man. Fredericksen wonders about the looks he gets when he's out with his kid: "Some times you think like, oh shit, should I have tattooed my forehead?"

Punk fatherhood is the subject, but it's not the only topic; Blaugrund folds in some other ideas, questions about the commodification and commercialization of punk (and other subcultures), the requisite teeth-gnashing over changes in the music industry. But those detours lead us back to the main road. There is, for example, a domino effect inherent in the free fall of CD sales: it means less income from recorded product, which means more touring to make up the difference, which means more time on the road and less time at home with the kids. The question of doing both jobs, and doing them well--particularly if you're a working musician, one that hasn't broken through yet, one that's still grinding it out--is getting progressively trickier.

The Other F-Word is thematically nimble; it moves fast but it isn't shallow, although the early sequences indulge a bit too heavily in a tired MTV aesthetic (in terms of cutting and graphics, anyway). Once the picture settles down, though, it is smart and frequently funny, with some surprisingly emotional, weighty stuff at the end. Those revelations and tearful confessions are hardly unexpected (that's the formula, after all), but that doesn't make them any less affecting. And they bring home the film's ultimate message: as much as settling down and having a family may fly in the face of the common definition of "punk," being responsible for other people is going to mellow a person out. It's just a fact. Your life changes and your priorities change, and that's life. Not all of them "grew up," but they all matured; the difference is subtle, but you understand it better by the film's end.