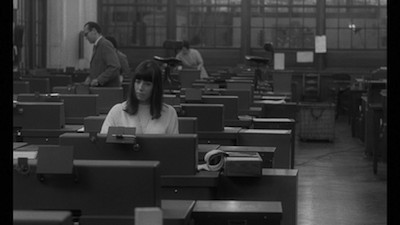 The short British film The White Bus, sometimes known as Red, White and Zero, is an odd, delightfully surreal, emotionally affecting minidrama from director Lindsay Anderson (This Sporting Life) and playwright Shelagh Delaney (A Taste of Honey). It stars Patricia Healey as a London secretary with a vivid imagination and a pronounced depression. The drudgery of her office job drives her to suicidal fantasies, a sorrowful image offset by the impish pleasure she derives from viewing a man on the street losing his cool over a football broadcast or a middle-class salary man chatting her up with talk of the proletariat. The girl is a cypher, displaying many moods at once, but revealing little beyond the image she strikes. She is a modern '60s woman. The White Bus was made in 1967, during the last stages of the cultural shift of that pivotal decade.

After her regular commute, the girl boards a tour bus and joins elderly vacationers and an ethnically diverse group of foreign tourists on a ride back to her hometown in Northern England. Along the way, they stop at a large industrial factory and an art museum. Anderson explores the poetic function of each (and the lack thereof, though it's not always in the places you expect--the elevator in the museum goes nowhere), seemingly leading us, and his subject, from city life to a more traditional area where people actually do things and appreciate the fruits of those labors. Yet, as the impromptu road trip ends, the divide is revealed to be far less simple than it seems. War, poverty, and the predictable baseness of human desire have hollowed out the old values, or at the very least exposed their true nature. Then and now, town and city--it's all one and the same. As the old adage goes, wherever you run to, you'll always find yourself.

Early signs of Lindsay Anderson's anarchic cinematic style show up in this 47-minute curiosity. When the tour bus arrives at its first stop, the director and cinematographer Miroslav Ondricek (Amadeus) begin toggling between the black-and-white film stock we have become accustomed to and clips of color scenes, just as they would the following year in If..... The effect of this trickery is hard to quantify, its purpose is ephemeral. In a way, it gives us hints of something grander, of a dream beyond the stark kitchen sink aesthetics, and also as a comforting reminder that life is not as abstract or harsh as we might imagine. There is something safe in the everyday, just as the girl keeps pushing forward despite her problems--and despite the racism, sexism, and close-mindedness that surrounds her--so too does culture continue to evolve. 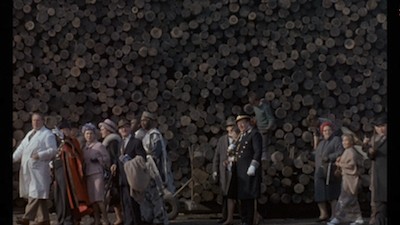 Video/Sound:
This Fox/MGM manufacture-on-demand release presents The White Bus in its original 16X9 aspect ratio. Despite the disclaimer at the beginning reminding us that the disc was struck from the best possible materials, the image quality is actually quite good, no warning was really needed. Though the black-and-white picture does have some marks and pops on the image, the overall clarity is excellent and the cold photography maintains a strong balance, presenting a realistic yet stylized vision of late 1960s life in London. The hues of the brief colors scenes have a dated, almost pastel look to them, that serves their purpose nicely without appearing to be a flaw of the transfer.

Sound:
The mono audio track is good, without much to distinguish it, yet also lacking anything that might mar one's viewing experience. The tones are clear, with no distortion or hiss, and even a solid rendering of some of Anderson's experimental audio effects.

FINAL THOUGHTS:
The White Bus is a bit of an odd duck. Less than an hour long, and featuring no known stars (though Anthony Hopkins makes the briefest of debuts), this collaboration between Lindsay Anderson and Shelagh Delaney bridges the gap between British kitchen sink and the anarchic late-'60s cinema that was just getting underway. A precursor to Anderson's breakthrough classic If...., The White Bus represents a similar ennui, though from a female point of view. At once confounding and profound, it's a surprising discovery. Recommended. 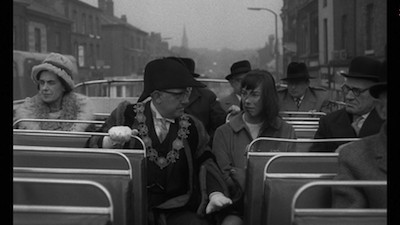