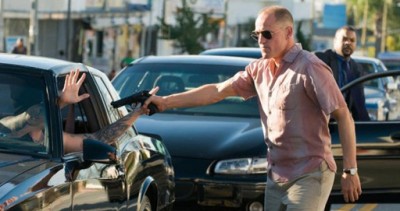 The first hour or so of Owen Moverman's Rampart is so strangely compelling, so utterly uncompromising and enigmatic, that you figure out right away that there's no way they can pull it of all the way through, and you're right. Its first half gets our attention; its second tries our patience. This is not to imply that the picture isn't worth seeing--merely that you should know what you're getting into.

Inspired--but not directly--by the titular scandals in the LAPD circa late-'90s, Rampart is a character study of what we would traditionally call a "bad cop." And he is a bad cop, but his story is more interesting than that. His name is Dave Brown, and he's played by Woody Harrelson, who (if memory serves) is in every single scene, front and center. This is a strategic decision by Moverman and his co-writer, the crime novelist James Ellroy; we only see the events of Brown's life as he sees them, and can only understand how others perceive him by how they act in his presence. By the later scenes, they're not pulling any punches.

Brown works in the Ramparts division, which is already plagued by scandal and under investigation when the story begins. "This used to be a glorious, soldier's division," Dave opines, as he trains a rookie in, it appears, exactly the kind of cowboy hot-dogging that got their squad into trouble. He's a bit of a legend there, 24 years on the job, but he's on edge more these days, and his personal life is a mess too; he's neighbors with his two ex-wives (they're sisters) and his two daughters, one with each ex. Every woman in that little compound seems to be mad at him, and each for her own reason.

Soon enough--and we're waiting for it--Dave gets in trouble, caught on tape administering a vicious beating to a civilian who has plowed into his squad car and tried to run. The tape becomes a media sensation (as it plays on the TV of his favorite bar, he demands "Isn't there a game on?") and the financial cost of defending himself and keeping his job becomes such that he makes the brilliant decision to do a stick-up job and pick up some dirty cash. That's when things really start to spiral.

The sheer stupidity of Brown's actions prevent much sympathy for him, but it's the kind of character for which sympathy doesn't really enter into the equation--and Moverman is honest enough to honor his characters' bad choices. The filmmaker previously worked with Harrelson (along with Steve Buscemi and an unrecognizable Ben Foster, who both appear here in small supporting roles) on the subtle and assured The Messenger, and this film shares that one's fascination with quiet; he likes the dwell in the pauses, the moments after a scene "ends." As a filmmaker, he's better working in a naturalistic style than the self-conscious one he occasionally adopts here; for every great scene of observed realism like his messy family dinner (in which two conversations are always going simultaneously), there's a "look at me!" sequence like his meeting with Buscemi, which is played entirely in panning shots, a decision that is snazzy at first but quickly degenerates into distraction.

The supporting cast is rather astonishing, and most are well utilized: Ned Beatty as the old timer who sees all the angles, Buscemi as the squirrely D.A., Sigourney Weaver as the professional go-between, Cynthia Nixon and Anne Heche as the wives who've had it up to here, Ice Cube as the deceptively easygoing IA investigator. They all come off well; the same can't be said for poor Robin Wright, whose relationship with Harrelson is so puzzling and impenetrable that it's ultimately inexplicable. (She also is made to give a line of dialogue so jarringly wrong that it torpedoes an entire scene--maybe the entire subplot.)

Minor flaws aside, the film is impossible to dismiss, if for nothing else than for the power of Harrelson's performance. The role is pitch-perfect for that sense of danger that he always seems, in his best roles, to be struggling to keep at bay--the fire behind his eyes, the tension in his jaw. It's a beautifully modulated piece of work, as this complicated and self-destructive characters creeps ever so further over the edge, losing what little control he had to begin with.

But this is the kind of character that we can only take so much of, and we're ready to dismiss him long before Moverman is. The crumbling of Dave's livelihood and grasp on reality in the third act is mirrored by the film, which meanders to a point of aimlessness; I see what the filmmakers are doing, but I'm just not sure it adds up. At this point in the narrative, those threads should be coming together. Moverman just lets them unravel. Rampart has moments of true greatness, which are harder and harder to come by these days. If they'd been able to tame them and manipulate them into something with a bit more coherence, then they might've really had something here.