MGM // Unrated // January 24, 2012
List Price: $24.99 [Buy now and save at Amazon]
Review by Stuart Galbraith IV | posted February 19, 2012 | E-mail the Author
Rebecca (1940) is one of three Alfred Hitchcock movies MGM/Fox has released to Blu-ray, the others being Spellbound (1945) and Notorious (1946). All are excellent, though Rebecca arguably bears more the personal stamp of its producer (and Hitch's boss/collaborator for much of the '40s), David O. Selznick, than Hitchcock himself. It was Hitch's first Hollywood film following an attention-grabbing string of commercial and critical successes in his native Britain. Undoubtedly eager to please his Hollywood employers, Hitchcock seems to have acquiesced to Selznick to a greater degree than he would on their later films, and there are comparatively few signature Hitchcock moments.

The Blu-ray is excellent, sporting a very impressive high-definition transfer with myriad little details and textures previously visible only on 35mm prints. The film had been released to DVD before, first by Anchor Bay in 1999, then by Criterion in 2001, featuring a whole mess of extras features not included here (you'll want to hold onto that disc), and finally by MGM in 2008, the source of the supplements included here. 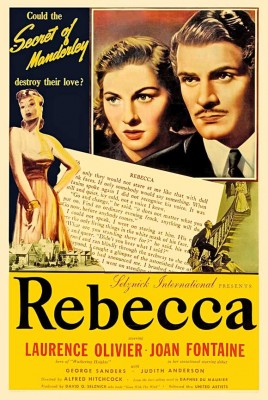 In the poster but not in the movie: Rebecca herself.

Their relationship is unusual. She has no money, no family, while he's circumspect yet given to sudden mood swings when reminded of his first wife, Rebecca, the victim of an apparent drowning accident. At de Winter's castle-like country estate, Manderley, the second Mrs. de Winter is introduced to the household staff, including austere housekeeper Mrs. Danvers (Judith Anderson), whose strange obsession with Rebecca unnerves the second Mrs. de Winter. Further, the house chokes with reminders. Mrs. Danvers carefully preserves an entire wing of the house just as Rebecca left it, and Rebecca's initials are monogramed and embroidered everywhere. (The latter is extravagantly overdone, probably at Selznick's insistence. He even wanted smoke seen at the end of the film to form a ghostly "R." Hitchcock vetoed that idea.)

Selznick made a name for himself as the (very) hands-on producer of faithful adaptations of bestselling novels*, most famously, of course, Gone With the Wind (1939). Like that film, Selznick preoccupied himself with casting and in shaping an extremely faithful screenplay. There are two major changes, the first one owing to a strict Production Code that alters a plot twist in the film's third act. I won't reveal it here and once one has seen the film it's easy enough to surmise what had been changed. The alteration is mildly disappointing, but the compromise is clever in its own way and not unsatisfying.

Hitchcock is generally credited with the other major alteration. In the book, Mrs. Danvers is much older than 42-year-old Anderson plays her in the film. In the novel, Mrs. Danvers's proprietary behavior springs from an imagined maternal role. She's the mad servant forgetting her place and assuming all but officially the title of Rebecca's mother. When the second Mrs. de Winter becomes the new lady of the house, Mrs. Danvers feels violated by every little change the second Mrs. de Winter implements.

In the movie, however, Mrs. Danvers is unquestionably a coded lesbian. Her bizarre behavior makes no sense otherwise. This is never explicitly stated, and one can enjoy the picture assuming only Mrs. Danvers is simply batty, while for others the implication is obvious. However, the film begs the question, why doesn't the second Mrs. de Winter immediately sack her, especially after manipulating the young bride in one key scene into wearing a dress knowing it would only greatly upset Maxim? The film also ends very abruptly, with a blood-and-thunder fiery climax more akin to Universal's '40s Frankenstein movies than other Hitchcock films.

Regardless, the characterization works so well partly because of Judith Anderson understated performance. She's menacing in a way first-time viewers can't quite fathom during the film's first-half. It builds slowly but reaches a fever pitch by the end. Olivier, by contrast, isn't very effective. He's best in long, theater-like dialogue scenes, but almost never shows any warmth, to the point where one wonders what attracted the second Mrs. de Winter to him. An actor like Claude Rains would have been better suited to the subtle complexities of the part.

Joan Fontaine, however, is perfect. The audience relates to her character at once, and her uneasiness being thrust headlong into an alien world of ostentatious wealth and social responsibilities is convincing. Just 22 at the time, she's young and extraordinarily beautiful, yet unlike her real-life elder sister, Olivia de Havilland, whose screen persona exuded virginal innocence, Fontaine, for all her external purity, had an undercurrent of earthy sexuality about her, that she wasn't averse to a little roll in the hay, as it were. When the second Mrs. de Winter finally works up the nerve to take full command of the household, in Fontaine's hands one can believe it.

The new Blu-ray allows viewers to appreciate the careful, nearly imperceptible trickery used to create Manderley. The film opens with an extremely elaborate tracking shot, on the road leading up to the ruins of Manderley (the film is told in flashback), all of which is accomplished with an expansive, well-lit miniature. There are also many glass shots of both the Monte Carlo shoreline and of interiors of Manderley, the latter to raise ceilings and broaden rooms. The high-def picture also reveals hallways and rooms extended with forced-perspective sets and full-size paintings.

The 1.37:1 pillarboxed, black-and-white presentation of Rebecca is very impressive. Detail is excellent, blacks are inky and rich, contrast solid. It reveals details heretofore undetectable excepting 35mm prints (see above), especially the textures of Fontaine's wardrobe, of the elaborately appointed sets, and so forth. The region A disc includes a perfectly adequate DTS-HD Master Audio English mono track, along with optional English subtitles, but no other languages.

Extras carried over from the earlier MGM DVD release include the featurette "The Making of Rebecca" and "The Gothic World of Daphne du Maurier," a Hitchcock audio interview, screen test footage, radio play adaptations (some of this material was also on the Criterion release), and a trailer. Richard Schickel, the John McCain of audio commentators, provides another dull and unenlightening track. Why do labels keep asking him back to do these things when it's obvious his heart isn't in it?

Rebecca was nominated for 11 Academy Awards and won two (Best Picture and Best Black-and-White Cinematography), and while certainly excellent, it's not quite at the level of Hitchcock's best films. However, the presentation is impressive and the extras, for the most part, are very good. Highly Recommended.