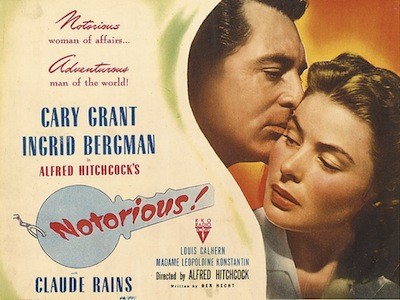 I adore Alfred Hitchcock's Notorious for how it so consistently flummoxes all expectations. Cary Grant and Ingrid Bergman starring in a film together in 1946, at the height of their fame, should have been the romantic cinematic event of the year. Audiences even today have certain expectations when they hear of the coupling. Yet, for most of Notorious, Hitchcock spends the film doing an end run around those expectations. He knows what we want to believe, and he let's us know that he knows, but instead of gratifying our desires, he chooses to make us wait.

In the film, Ingrid Bergman plays Alicia Huberman. Alicia is a notorious woman. While that word probably makes us think of a criminal when heard today, when a woman was notorious in 1946, it wasn't very gangsta. It's a reputation thing, you understand. Ms. Huberman is known to enjoy a drink or two in the company of men. By comparison, the fact that her father has been convicted as a Nazi spy is positively tame. It almost restores a little honor to her public image.

Cary Grant is T.R. Devlin, emphasis on "Devil." The two meet at Alicia's hedonistic blowout following dear ol' dad's sentencing. She likes him at first, but that's before she knows what he does for a living. Devlin is a government agent, and he has a proposition for Alicia--come work for the U.S. and reinvigorate some of her good name. Their wiretaps tell them that she is a patriot and did not condone her father's actions. They want to put her on assignment in Brazil hunting down her father's contacts. The way Devlin gets her to do it, it's almost like blackmail. It's certainly more bullying than your usual rah-rah sign-up speech. It gets through to her, though, and she decides to do it, seeing it as an opportunity to turn over a new leaf.

It's a bit of a character conundrum, since she's presented herself up until now as a wanton woman who cares not for serious things. Clearly, that image was a front, a way to shield herself from the disappointment of her immigrant father. (Mother has departed this Earth, her natural-born U.S. citizenship intact.) If the most important man in her life has betrayed her so, then better to block out all possibilities of any further caring relationships. Her way of flirting with Devlin is to inform him that the only reason she likes the sappy lovesong playing on the hi-fi is because it's such blatant hooey. Here may be the source of her notorious reputation, when her opening line in a romance is to inform the suitor that romance need never come into it. Such talk from the star of Casablanca, whose affectionate glance was worth all of Europe!

There is certainly a lot of complex psychology going on here. Moviegoers heading out to see Notorious would have been going in order to see its stars in many a passionate embrace, yet Alfred Hitchcock keeps inserting himself between them and pushing them apart--and for very dark, painful reasons, at that. The sexual tension doesn't dissipate by being shattered, it only multiplies, each new piece growing to the size of the original. Every time Alicia and Devlin meet to exchange information, it's so devastatingly present, they can barely look at each other. They want to be as close as they once were, you can feel how badly they want to rip each other's clothes off, yet it can't happen. In fact, when they have to kiss in order to fake out Sebastian (Claude Rains), the Nazi fugitive who has now become Alicia's suspicious, jealous husband, it's something they can barely put back in the bottle. Yes, just like what had spilled out of the champagne bottle, the Maguffin of Notorious, in Sebastian's secret cellar just moments before. 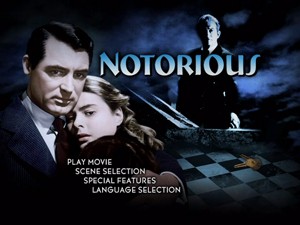 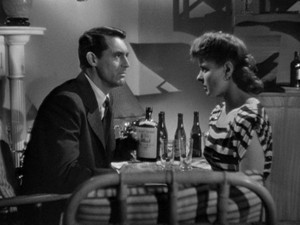 Image captures from the standard definition DVD released in 2008.

Video:
The new high-def transfer (1080p, AVC ecoded at 38 MBPS) didn't wow me, honestly. Which is not to say there is anything wrong with it--the resolution tends to be nicely rendered with decent blacks and a good balance of dark and light--it's just not a sufficient bump up from previous efforts to make it stand apart. I didn't find the upgrade all that different from Fox's previous DVD release a couple of years ago. Grain is inconsistent, and there are still noticeable scratches and marks on the print. If you own the previous edition, you may want to temper your enthusiasm before rushing off to buy the Blu-Ray.

Sound:
The mono soundtrack has been given a DTS-HD jolt, and the results are solid. The audio is clear without any evident pops, hisses, or drop-outs.

There is an option for English Closed Captioning.

Extras:
The extras on this disc match the ones that were on the DVD that came out a couple of years ago as part of the Hitchcock "Premiere Collection," and some of them were also originally on the Criterion edition of the movie that has been out of print for a while. Criterion fans will recognize the 1948 radio version with Joseph Cotton and Ingrid Bergman, the original theatrical trailer, and some of the items in the stills gallery.

From the last standard release, we get two audio commentaries, one by Rick Jewell and the other by Drew Casper. There is also an isolated music and effects audio option, highlighting the music of Roy Webb (Out of the Past). Jewell and Casper split duties so that each covers different ground. Jewell speaks less about Notorious and more about the overall historical context surrounding the film, particularly in terms of the story of RKO; eventually, the story does swing to Notorious and the David O. Selznick relationship with Hitchcock. Casper, on the other hand, goes over the film, looking at the story, artistry, and Hitchcock.

In addition to the commentaries, we get an excerpt of recorded audio with Hitchcock, Peter Bogdanovich, and Francois Truffaut discussing Notorious during Truffaut's famous interview session with the master of suspense.

A short restoration comparison leads into three full featurettes:
* "The Ultimate Romance: The Making of Notorious" (28 minutes, 20 seconds): A full-on discussion of the plot of the movie with a major focus on the love story, how the movie was developed, and some background on writer Ben Hecht. It features a round table of commentators--the aforementioned Casper and noted critic Richard Schickel among them--along with archive photos and clips.
* "Alfred Hitchcock: The Ultimate Spymaster" (13:10): Examining the various espionage stories covered in the Hitch filmography and how it influenced the genre, up through James Bond.
* "The American Film Institute Award: The Key to Hitchcock" (3:20): Mary Stone talking about the night Hitchcock was given his lifetime award and material from the acceptance speech.

The video extras are in Standard Definition.

FINAL THOUGHTS:
I love Notorious. It's one of those that gets better every time you watch it, and I've watched it several times in the last few years. The dialogue grows richer with meaning, and the warped romance reveals new and tantalizing edges. Its plot appears simplistic, which is arguable, but the character elements most certainly are not. These people run deep. Cary Grant is charming and intense, and Ingrid Bergman manages to be fragile and stubborn and perfectly real. The bonus features are bountiful, and while the Blu-Ray is not a total knockout, it's still Highly Recommended. Notorious is getting close to being my favorite Alfred Hitchcock movie. It's a twisted little masterpiece.