Breaking Glass Pictures // Unrated // October 25, 2011
List Price: $21.99 [Buy now and save at Amazon]
Review by Stuart Galbraith IV | posted November 30, 2011 | E-mail the Author
Uncle Bob (2009) is a documentary with an obvious but irresistible hook drawing one in to its unexpected but fascinating story of art, sexuality, murder, intolerance, a possible cover-up, and a search for the truth behind it all. Unfortunately, Uncle Bob gets bogged down by an ill-advised approach that might be simple exhibitionism or perhaps a deliberate attempt to emulate his subject's provocateur style. It's hard to tell for sure.

Nevertheless, it's one of those documentaries about a subject so fascinating that in the end it's not a total loss, though like me you may find yourself wishing it would end long before it does. This Breaking Glass Pictures release is fairly loaded with extra features, though the back cover is wrong, listing the feature as "16:9 anamorphic" widescreen when it's actually 1.37:1 full frame. 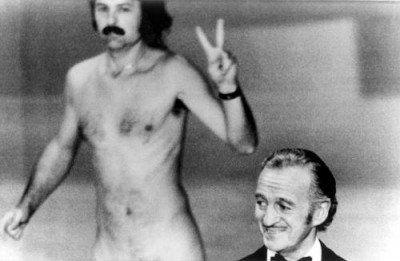 Robert Opel is best remembered for his sudden appearance at the 46th Annual Academy Awards, flashing a peace sign while streaking behind unflappable actor David Niven as he was in the middle of introducing Elizabeth Taylor. "Well, ladies and gentlemen," Niven quipped, "that was almost bound to happen. But isn't it fascinating to think that probably the only laugh that man will ever get in his life is by stripping off and showing his shortcomings?" It's still one of Oscar's most famous moments, though a lot of evidence suggests either awards show producer Jack Haley, Jr. staged it, or that he turned a blind eye to Opel's plan, giving him access that might otherwise have been impossible.

Opel later opened Fey-Way Studios, a mostly gay male art gallery on Howard Street in San Francisco. The gallery featured explicit, controversial but groundbreaking exhibitions by new talent, notably including Robert Mapplethorpe and Tom of Finland. Opel himself made films and did performance art, usually challenging mainstream conservative values with outrageously over-the-top, explicit concepts, including a six-foot-tall penis costume he sometimes wore in public. He produced at least one elaborate theater piece, "The Heartbreak of Psoriasis," starring Divine. But then in 1979 Opel was murdered in his gallery, shot dead at point blank range by an apparent stranger.

Opel's nephew and namesake, Robert Oppel, explores this life and tries to unravel lingering mysteries about his uncle's murder. Director Oppel suggests homophobic police officers (who labeled a cardboard box of evidence from the case a "homocide") facilitated at least one of the shooter's numerous escapes from custody. Later, when Oppel tries to interview the convicted shooter in prison, who now claims to want to tell the "true story" of what happened, Oppel is repeatedly denied access, authorities claiming Oppel would present a "security risk" - in a maximum security prison.

Uncle Bob positively bombards the viewer with images: letters and legal documents, archival photographs and newspaper clippings, vintage clips and reenactments. A lot of this material flies by without the viewer being able to digest what they're seeing, and instead much of the film's 78-minute running time is given over to Oppel's staged scenes reenacting Opel's murder and the events that followed; Oppel stripped to the waist (repeatedly), on his cell-phone in split-screen shots with interviewees; as well as new reconstructions of Opel's short films (with Oppel playing Opel), supposedly because the original footage had "turned to dust." (This is hard to believe. While pre-1950 nitrate film stock might do that, it's unlikely anything Opel was using in the 1970s would've deteriorated that way.)

The recreations and reenactments come off like an art student's end-of-semester film project, and at other times, performance art, shot on video but with that optically added cliché of film scratches and splices superimposed, to suggest an old home movie. These scenes turn attention away from Opel while spotlighting Oppel, who like his uncle isn't shy with the family jewels. In trying to understand his uncle's art and life and come to terms with his murder, Oppel admirably immerses himself in last vestiges of the 1970's gay scene, but this doesn't really contribute anything to the audience's understanding of the film's subject.

Shot on video with archival material from a variety of sources (including The Mike Douglas Show, on which Opel appeared with Bea Arthur), Uncle Bob looks fine for what it is. The image is full-frame throughout, though for a long stretch about two-thirds of the way through the image becomes matted widescreen for no clear reason. The Dolby Stereo audio is fine, and there are no English or other subtitles/language options.

Supplements include an interview with director Oppel (oddly, this is 16:9 enhanced); a trailer and photo gallery; a "Red, White & Blue Me" music video, and complete versions of the Opel/Divine interview and Trip Back Forward, both of which are excerpted in Uncle Bob.

I was quite intrigued by Uncle Bob's subject matter and, while a fascinating subject, toward the end I found the film and director Oppel's ubiquitous presence therein pretty insufferable. Rent It.