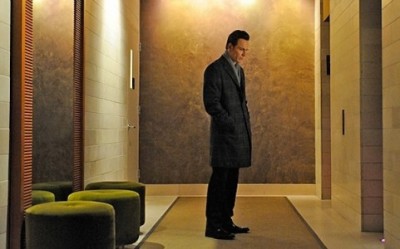 In the opening sequence of Steve McQueen's Shame, protagonist Brandon (Michael Fassbender) flirts silently with a woman sitting near him on the subway. The filmmaker shows, and demands, incredible patience in this wordless scene; he lingers on the details (his fleeting glance, her ringed hand, the way she uncrosses her legs). McQueen intercuts that sequence with short, staccato glimpses of Brandon's day-to-day life, the rituals of his routine, which appears to consist primarily of the spaces between sex. There's nothing terribly expositional happening, but we feel, very quickly, like we know exactly who this guy is.

At its heart, Shame is a character study--it's not exactly plot-heavy. It is more interested in introducing us to this man, and spending a few days with him. But over the course of those days, something does happen: his sister (Carey Mulligan), a singer with intimacy (and boundary) issues of her own, comes to crash on his couch. He doesn't think it's a good idea, and our observations indicate that he may be right. They certainly bring out the worst in each other--and in Brandon's married boss David (James Badge Dale), the kind of tone-deaf would-be lothario who's always saying the wrong things to women.

McQueen (and co-writer Abi Morgan) tends to rotate between brief moments and mercilessly long encounters, holding the camera past the point where most filmmakers would cut. Brandon attempts to go out with a nice girl from his office; the awkward small-talk of the first date--and the way that small-talk is constantly interrupted by waiters--has seldom been so accurately recreated. Mulligan performs "New York, New York" at a gig in a long, tight close-up that turns into a quiet tour-de-force. She and Fassbender have a nasty fight that's played in a long two-shot which gives the viewer no relief.

In a scene like that, we realize that Fassbender has nowhere to hide in this performance; he's not just naked physically, but emotionally as well. These long close-ups are unforgiving, but he is up to the task, and there's a tight shot on his conflicted face at the end of a particularly hedonistic sequence late in the picture that leaves the viewer gasping.

Though its director and star aren't natives or even current residents, Shame also gets the look, feel, and smell of New York right now in a way that few films have; in that regard, and in its approach to another (to put it charitably) difficult protagonist, it is reminiscent of a film set in a very different New York: Taxi Driver. As with Scorsese's masterpiece, Shame is not a film that you "like," or recommend to friends looking for a good-time Friday night movie. But it is haunting and involving, and McQueen's honesty is admirable. His camera doesn't blink, doesn't flinch, and doesn't look away--even when we wish it would.