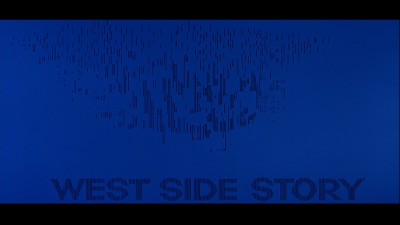 West Side Story is without question one of the most iconic, undeniably powerful, and memorable films ever released. The idea behind the production was an act of genius in and of itself: taking the tried and true formula of William Shakespeare's prodigious work known as Romeo & Juliet and adapting it into a modern day setting. Jerome Robbins monumental musical brought forth enough flair in style and heart of wonder to capture the imaginations of even the most cynical of moviegoers and film critics upon the theatrical release in 1961 - now 50 years ago. There are few films that manage to be so awe-inspiring in scope. West Side Story has the distinction of winning 10 Academy Awards (including Best Picture) which is the most ever for a movie musical.

The film lays out some ground rules for the story from the beginning as two rivaling gangs in New York known as the Jets and the Sharks begin to demonstrate their immense displeasure with each other by evoking these negative sentiments with a perfectly choreographed song and dance number. The gang form replicates the original rivalry of Romeo & Juliet found between the Montagues and the Capulets.

This is a love story, of course, between two young star-crossed lovers from different backgrounds and who must struggle with the lack of acceptance from those who surround them. Tony (Richard Beymer) was the former leader of the Jets gang, and now he's looking for a brighter tomorrow without gang life interfering with a newfound spirit for renewal and growth. Maria (Natalie Wood) is the beautiful young woman who captures Tony's heart. Maria has inner-beauty that matches her outwardly gorgeous looks and she falls in love with Tony with an equal level of intensity and immediacy. Conflict inevitably arrives when Bernardo (George Chakiris) learns that his younger sister is involved with former Jet leader Tony. Bernardo is the gang leader of the Sharks. 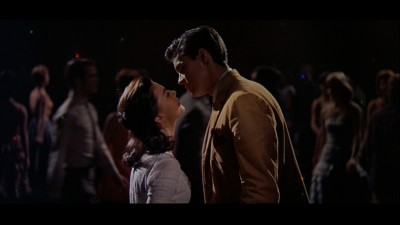 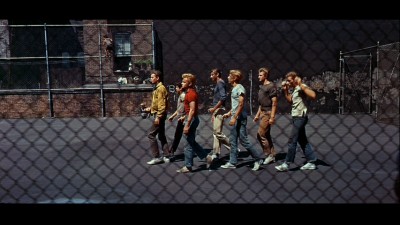 The performances in West Side Story are brilliant and uncannily captivating across the board. Both lead performances by Natalie Wood and Richard Beymer are remarkable achievements. Beymer was cast in one of his most memorable roles of his career and Wood added another excellent performance to her already long list of achievements (including her child performance in the original Miracle on 34th Street and a performance against James Dean in Rebel Without a Cause). The supporting cast of actors helps the foundation of the film dramatically with great performances by Russ Tamblyn as the new Jet leader Riff (who is close friends with Tony), George Chakiris as Bernardo, and Rita Moreno as Bernardo's feisty and intelligent girlfriend Anita. George Chakiris and Rita Morena both received well deserved Academy Awards for their sensational performances.

There are two essential double-bill aspects to West Side Story that have continued to be so impressive after all of these years following the debut: the collaborations in music that combined the efforts of an undeniably jazz-infused Leonard Bernstein and the up and coming brilliant lyricist Stephen Sondheim, and the directing efforts from both Robert Wise and Jerome Robbins (who also choreographed the film). Robbins deserves the most recognition though, as he conceived of the original play and lent the best of his choreography on a level that had never been captured before and hasn't been since. Either double bill aspect concerning this massive and unrelentingly complicated production is purely wonderful and worthy of acclaim. The music sweeps viewers off their feet and captures the essence of romance and love while the energetic, stylish direction (the majority of which was done by Wise) and choreography (entirely by Jerome Robbins) brings some of the most captivating cinematic visuals around.

Who can forget the opening dance number by the Jets, the spinning visual-effects of Maria to a new dance number with countless energetic dancers, the silly rooftop dance that celebrates and critically dissects both the promise and disappointments found by minorities living in America? Attempting to even pick a favorite scene or sequence can lead to some problems: every scene is so beautifully and expertly crafted that it almost seems more appropriate to simply select a personal favorite from the bunch. The mid-way rushing of frantically scattering gang members, the long silence, and the slanted camera-work might be one persons pick, but how about the simple but elegant dance between Tony and Maria? There are so many perfect moments. The execution of this production is almost flawless. 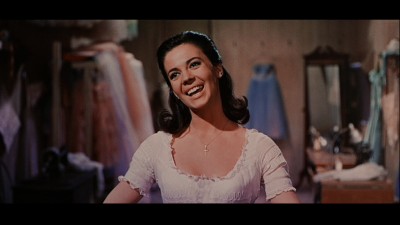 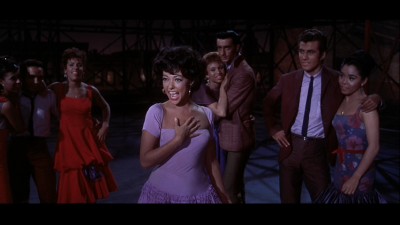 There are some minor detractors as it is hard to imagine new audiences of West Side Story not having at least some difficulty accepting the fact that Natalie Wood is playing a Puerto Rican. The racial issues are actually inherently important to the story of West Side Story itself so the unmistakable fact that there is a racial issue in the film is sadly disappointing nonetheless, but for those who can overlook this aspect it should still be worth recognizing that Natalie Wood delivered a fantastic performance that continues to be enchanting. It is important to remember the historical context of when the film was produced within the Hollywood studio system and to appreciate positive elements without overlooking negative drawbacks.

The history of this film is so interesting. It was a huge undertaking for everyone involved, most notably Jerome Robbins, who was eventually fired from the film despite being the largest source of its creative energy.  The film surprised audiences worldwide. It was such a tremendous hit, and no one expected it to take everything by storm the way it did. The film continues to amaze audiences after half a century. The play version is performed worldwide through schools and theater production companies. Even for those who haven't seen the film, there is a clear distinction of the importance of West Side Story and of the music that brought it to life. There is not even a single film out there quite like it and that continues to make it even more special and enduring. West Side Story is all about love between two unlikely souls, the love for theatre (as represented through this stunning cinematic tour-de-force), and the recognition of the importance of overcoming racial issues and understanding the commonalities between people of different backgrounds.

Set to the lush cinematography of Daniel L. Fapp, West Side Story is pretty much as the early advertisements for the film claimed: "As other movies age ... West Side Story gets younger!" In other words:  it's a timeless classic. 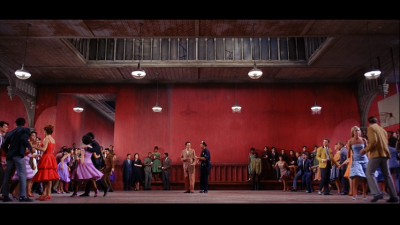 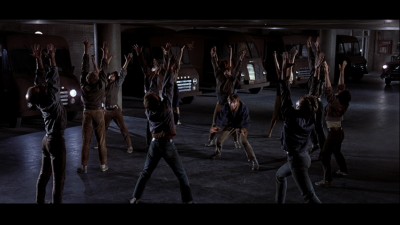 The images featured in this review were taken from the DVD edition included in the Blu-ray/DVD Combo release and do not reflect the Blu-ray picture quality.

There have been reports that there is a problem with the overture/opening credits to the film, and that a replacement option will be made available by MGM at a later date.

MGM has released a Digibook version of West Side Story. It is currently available exclusively to Target stores.

West Side Story arrives on Blu-ray with an almost immaculate looking transfer - which is great news as it was filmed with 70mm cameras. In one word: incredible. Fans of the film will be hard-pressed to find an element of dissatisfaction. The colors are so vivid; the contrast so accurate, the cinematography brilliant, and the overall feel of the high-quality production is almost perfectly captured. The image clearly hasn't been tampered with by annoying "picture-quality enhancing" shortcuts. Make no mistake: this Blu-ray is the best presentation of West Side Story on home media. The film is presented on a 50 GB disc with a 25 MBPS 1080p AVC encoding in the original theatrical aspect ratio of 2.20:1.

The audio presentation doesn't skimp out on any trimmings either. The film is presented with a glorious 7.1 DTS-HD Master Audio presentation that captures the music in all its magnificent glory. The dialogue is also well reproduced on this Blu-ray release and sound directionality is well used for both the score and songs. Other Audio options available include: Dolby Digital English 4.0, Spanish 5.1 Dolby Digital, French 5.1 DTS. Subtitles are provided in English SDH (for the deaf and hard of hearing), Spanish, and French.

Pow! The Dances of West Side Story (19:12) can be viewed with In-Move Viewing Mode or as a standalone featurette that features interviews with critics, directors, choreographers, and select individuals who worked on the film about their thoughts on the impact of West Side Story and its dances.

Music Machine isn't that different from how it sounds. Viewers can choose a play all option or individually select music scenes in the movie to watch standalone from the entire experience.

Song-Specific Commentary by Lyricist Stephen Sondheim is somewhat fascinating and somewhat depressing. Sondheim seems to offer a view on his lyrics that is negative, overly harsh, extremely unflattering, and thoroughly interesting all at the same time. He apparently doesn't feel quite as confident in his own lyrics as his fans do. Sondheim does share a great deal about how or why he created some of the lyrics to his songs and he gives good information about the overall process.

A Place For Us: West Side Story's Legacy (29:28) features interviews with some of the individuals involved in making West Side Story and it covers some ground regarding how the film has had an influence on other films and projects. This featurette is broken down into two separate segments (Creation and Innovation and A Timeless Classic). The parts are viewable individually or together.

West Side Memories (55:55) is a featurette that was previously available on prior DVD editions. It contains additional interviews with those involved in the production and it goes more in depth for various elements of the film's creation and production issues that arose over the creative course.

Storyboard-to-Film Comparison (4:50) is a brief but interesting video collection of storyboarded drawings that were used to capture the essence of select scenes or moments before being filmed.

Trailers used for the original release and post-awards release of West Side Story are also included. 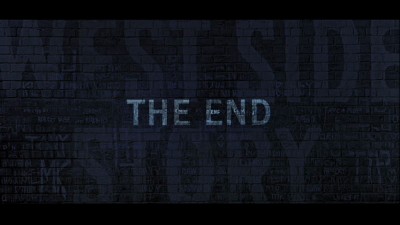 West Side Story is one of the great landmarks of cinema. It is the perfect blend of theatricality and cinematic wonder. The performances amaze, the direction mesmerizes, and the musical songs are unforgettable. The Blu-ray release contains an excellent presentation and some worthwhile extras. Make sure to add this release to your film collection. DVD Talk Collector Series.