"Violence is their God... and they hunt in a pack like rabid dogs!"

And a good time was had by all. M-G-M's own M.O.D. (manufactured on demand) service of hard-to-find library and cult titles has released Devil's Angels, the 1967 American International Pictures biker flick from producer Roger Corman starring John Cassavetes, Beverly Adams, Mimsy Farmer, Leo Gordon, and Buck Taylor. Written by AIP master-in-residence, Charles Griffith, Devil's Angels doesn't blow its cool until its nasty, brief ending, building up a good head of steam through solid scripting and performances. No extras for this okay widescreen transfer. 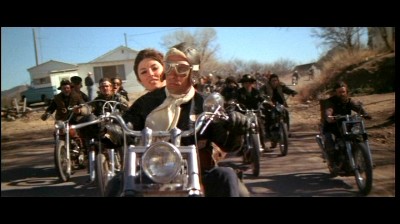 Dig. Punk-ass Gage (Buck Taylor) wasted a "civilian" on his hog, and then he was dumb enough to bring his sickle back to his outlaw biker pad, bringing heat down on everyone in the gang. So The Skulls' president, Cody (John Cassavetes), figures this is the best time to ditch their Presidio locale and head for the mythical "Hole in the Wall" that Joel-the-Mole (Maurice McEndree) has often told him about: a hide-away not unlike Butch Cassidy's famed retreat, where The Skulls can "blow their own peace" and "love each other" without "The Man" hassling them, you dig? So the boys and their mamas saddle up, including Cody's stylish old lady, Lynn (Beverly Adams), and head off to first liberate Funky (Buck Kartalian), without whom no Skulls ride would be complete. The Skulls make their way towards tiny Brookville, a podunk small town out in the hills and scrubs, where the gang is not exactly welcomed by the squares and blue hairs who are holding their annual city picnic and fair. New-to-town sweetie, Marianne (Mimsy Farmer), has absolutely no fear of the bikers, latching onto a handsome one, Roy (Kipp Whitman), and riding off for a party. Leading town citizen Royce (Russ Bender) wants Sheriff Henderson (Leo Gordon) to do something about these ruffians, but Henderson plays it cool and tough, allowing the gang to stay overnight at the beach before they're to head out of Brookville for good―a compromise the level-headed Cody agrees to. However, things get ugly when The Skulls start to party, and Marianne is roughed up, and before you know it, The Skulls, along with rival gang The Stompers, are ready to grind Brookville into the dirt. 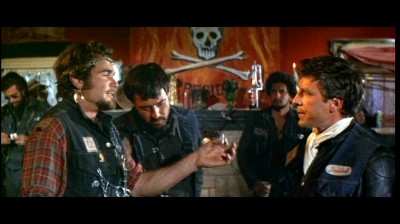 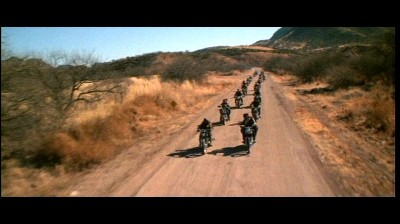 Certainly of prime interest today because of the unexpected participation of heavyweight John Cassavetes (in such a low-rent, sleazy exploitation production), Devil's Angels is actually quite thoughtful for a drive-in double-bill biker flick. Anyone wishing for hard-core biker thrills would do well to look elsewhere: nary a nipple or bare bottom is to be spied during the low-key "orgies of violence," with some grass-smoking and some off-camera knuckle-dusting coming off quite tame compared to later, harsher biker epics. Scenes where you expect conventional pay-offs, like the pursuit of the vacationing couple who knock over a Skulls bike, or Marianne's would-be rape, are dialed back for either humor (the former) or suspense (the latter). Like so many of these AIP and imitator biker movies, though, Devil's Angels could easily be transformed into a Western (horses for hogs, six-shooters for chains, rotgut for weed, anti-social desperadoes for bikers, saloon gals for mammas, rebellious-but-essentially moral gunslinger for rebellious-but-essential-moral biker pack leader). And increasingly like so many mid-to-late 60s Westerns, the notion of elegy for a passing time is present throughout Devil's Angels, where the relative "innocence" of Cody's belief in holing up with his gang and avoiding any contact with civilization meets defeat against his gang's rush to mete out violence for violence's sake alone, to a society it despises. 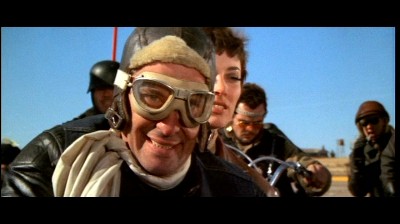 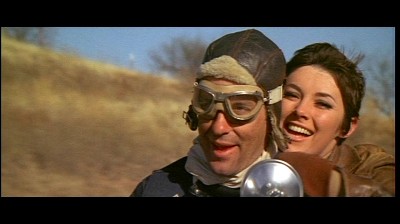 Scripted by Charles Griffith (A Bucket of Blood, The Little Shop of Horrors, The Wild Angels, The Swinging Barmaids, Eat My Dust), Devil's Angels co-opts a bit of emerging counter-culture for its Western framework by presenting a biker leader, Cody, who doesn't want mayhem but instead seeks love with his gang, love away from "The Man" who brings heat down on them because they're a threat to "straight" society. His continued efforts to keep his boys calmed down generates most of Devil's Angels' suspense: is the obviously bright (and not-too-subtly "good") Cody smart enough to keep a tether on these animals? He's constantly putting the brakes on his fellow Skulls' at-bay terrorizing, warning them not to destroy a grocery store (they do, anyway), asking them to act like "dudes" (another Western reference), and gallantly offering to pay for the destroyed groceries on their way back...after paying for the gas (a real outlaw biker punk would have stolen the gas and raped the attendant, according to later cinematic outings). When they hit Brookville, the gang, particularly Funky, Cody's favorite, want to "play," but Cody tells them to cool it so they can have a place to stay the night. And when rebellious Billy the Kid (Marc Cavell) wants revenge on the town that falsely accused them of rape, it's Cody who says no at first, only to acquiesce when he realizes he'd lose his position as leader in a vote (and then he still tries to cool things out with The Stompers, until the whole thing blows sky high). 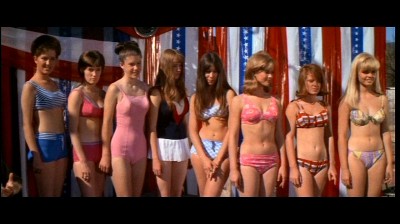 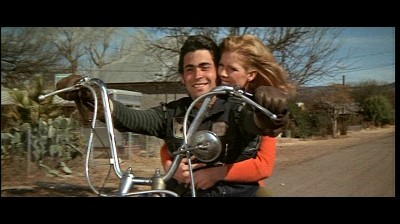 Cody's sole purpose indeed seems to be to get his gang away from the very environment they derive the most pleasure from―threatening the civilians―to a place where they can remain, in his romantic notions, in idyllic isolation. But of course, no such place exists, as first his girlfriend Lynn asserts ("There are no good places without cops"), and then his moral compass, Joel-the-Mole ("Where's 'Hole-in-the-Wall' anyway?" a disillusioned Cody asks at the end of the movie, to which a cold, hard Joel responds, "There is no such place."). (Spoiler alert) When he goes to leave Brookville as it's being consumed by The Skulls and The Stompers, he tries to bring Lynn along, who blows him off with a carnal kaput: "But I'm having a good time!" Cody the thinker, the dreamer, the romantic, has no place in either the straight-laced, restrictive squaresville world where the law and truth are ignored if inconvenient, or the biker world, where disgusting violence is the only expression of chaotic nihilism. That's some fairly heavy stuff for what's supposed to be just a safe-but-titillating jerk-off session for would-be mayhem-spreaders and armchair sadists. 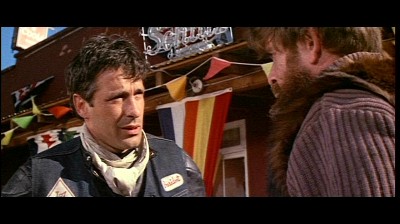 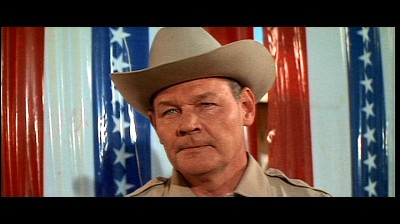 Daniel Haller's direction (Die, Monster, Die!, The Wild Racers, The Dunwich Horror, lots of episodic TV) is clean and effective, focusing more on suspense rather than balls-out action, which may disappoint viewers looking for cheaper thrills. A good example is the "party" with Marianne, where the boys seem ready to gang-rape her after getting her high (some nice distorted frames from cinematographer Richard Moore, of The Wild Angels, The Reivers, and Sometimes a Great Notion). The sequence is extended for maximum squirm value, but she eventually escapes...(Spoiler alert) only to be brutally assaulted at the end of the movie when the gang, fed up with the hypocrisy of the town's law-ignoring elders, demands she be raped for their trouble. Haller doesn't go on with the rape, but he ends the scene quickly by showing the screaming Marianne subsumed by the tearing, clawing bikers―a frightening shot as our mind fills in the blanks. It's too bad Haller doesn't go for broke in this final sequence as The Skulls and The Stompers go berserk destroying Brookville, showing the full weight of the bikers' sadism to get Cody's message of peace across more fully. We only get some burnt-out cars, and two guys dancing in the streets as everyone runs around yelling, but the viewer gets the idea. 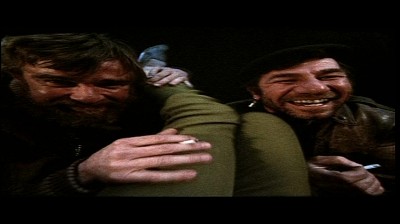 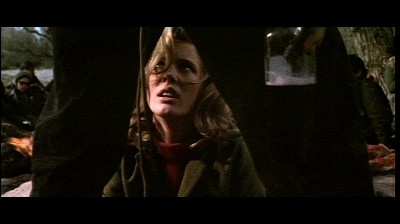 As for Cassavetes, it is strange to see him here in this well-made-but-essentially-crappy little biker flick, especially when put into context with the other projects going on in his life in 1966-1967―a break-out period for the actor: an Academy Award nomination for a supporting role in The Dirty Dozen (the most popular film of 1967), a co-starring role in the upcoming Rosemary's Baby, and the on-going production of his Academy Award-nominated indie, Faces. Of course, Cassavetes made no bones about doing work like Devil's Angels or The Dirty Dozen strictly for the paychecks to make his own films, but to be honest, he's largely phoning it in here (as opposed to his hilarious, winning performance in The Dirty Dozen). There are a few times where it looks like he might take off into Method heaven, getting goofy and giddy hugging people and kissing them and calling their names over and over again in ecstatic efforts to pump up the moment. But eventually, he settles Cody down into a workmanlike performance, one that's entirely respectable...but not exactly exciting (unlike similar slumming Dennis Hopper's inspired lunacy in AIP's The Glory Stompers). Still, the curious weight of having an actor of Cassavetes' stature married to a lurid piece of sh*t like Devil's Angels―a well-written, thoughtful lurid piece of sh*t―gives the movie a weird vibe that keeps it consistently interesting...and entertaining. 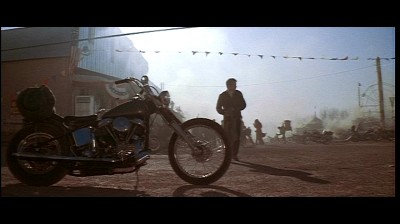 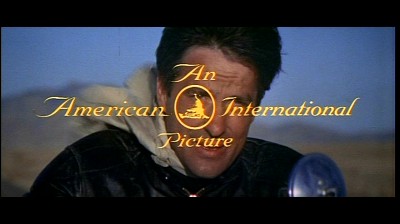 
The anamorphically-enhanced, 2.35:1 widescreen transfer for Devil's Angels is a tad dark and grainy...but that may have been part of the original look of the film. Colors are necessarily muted (lots of wintry-looking desert scenes), while scratches and dirt are kept to a minimum. Good job, M-G-M, considering this has never been available outside of a pan-and-scan.


The Dolby Digital English split mono audio track is fat and loud, with low hiss and little fluctuation (good bongo music from Mike Curb). No close-captions or subtitles are available.


No extras for Devil's Angels―too bad; I would have liked to see how they sold this in the trailer.


Thoughtful trash. It's weird seeing John Cassavetes slum his way through an AIP biker flick, but he's interesting enough at times to keep our attention. Charles Griffith's script is better than it seems at first glance, and director Daniel Haller keeps it all moving along at a tight, suspenseful clip. Necessary viewing for anyone interested in the evolution of the 60s biker movies. I'm highly recommending Devil's Angels.