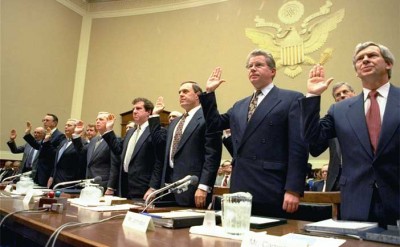 The idea that the seven heads of the big tobacco firms could sit in front of a congressional subcommittee as recently as 1994 and say, each of them, with a straight face, that nicotine is not addictive is a mind-boggler. But they did. It was the subcommittee on health and the environment, led by Congressman Henry Waxman, and though there were a couple of friendly faces for the CEOs and VPs (like Congressman Thomas J. Bliley, who had enjoyed their donations for years), most of the lawmakers let those men have it--and one of them forced the head of Philip Morris to let a man named Victor DeNoble waive his confidentiality agreement to testify for them. Put on the spot, the company released DeNoble. He then came to tell the committee about how his research had led to Morris isolating and pushing the addictive quality. All seven of those tobacco muckety-mucks left the industry shortly thereafter.

DeNoble's story is the primary focus of Charles Evans Jr.'s documentary Addiction Incorporated, though it is not the only one. Evans tells several tales here, separate yet interconnected by their ties to the fall of Big Tobacco: DeNoble's research, ABC's investigation of the industry, the FDA and Congressional pick-up, the first class action suits, the Reno Department of Justice's RICO trial.

Evans covers something like thirty years here, and it's hard to cover that much ground smoothly; the film jerks somewhat abruptly from bit to bit (at least early on), and seems to struggle in finding a consistent style. The early scenes--for which there is not much period footage--indicate a strong Errol Morris influence: there are slick reenactments and visualizations, clever use of stock footage, straight-into-camera interviews, and no narration. There is also animation--too much of it, frankly, silly and overused.

But the story told is compelling. DeNoble was a drug researcher, hired by Morris in the early 1980s to study nicotine and its component parts, and how they created addictions in rat lab subjects. The idea (or so he was told) was to isolate those elements to build a "safer cigarette," but obviously, that's not what happened. When DeNoble pushed to publish his findings, he ended up getting shown the door--and gagged by that confidentiality agreement.

The film picks up steam considerably when leaping ahead into the '90s, tracking the television and government investigations and the crumbing of the giant. One highlight is the C-SPAN coverage of those subcommittee hearings--it's just plain riveting to watch that murderer's row getting pressed and prodded. And then there is the fascinating tale of Wendell Gauthier, the New Orleans attorney who assembled a team of 51 law firms that "didn't like bullies" to file that class action suit.

Many of those lawyers appear here--there are a lot of interviews, in fact, to an extent that it's not always easy to keep straight who's who. Surprisingly, one of the few subjects who doesn't come off well is DeNoble. Make no mistake, he's a brave and admirable guy (he's dedicated his life to going to schools and teaching kids about the dangers of smoking and drug addiction). But he's weirdly stilted in his interviews, which sounds like a series of pre-packaged sound bites; he sounds less like a subject than an actor saying his lines. Maybe he's just told the story too many times, to a point of staleness.

That's not a genuine detriment to the value of Addiction Incorporated, though, and neither are the too-stylized opening sequences. Contrary to those early scenes, this is a film that's willing to sacrifice flash for facts; there is a lot of information packed into its 100 minutes, and its tales of industrial and corporate intrigue and simultaneously compelling and infuriating.