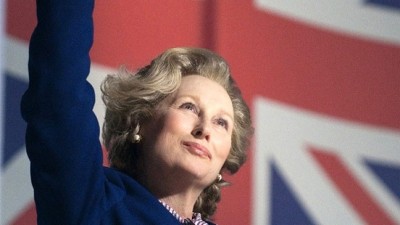 We first meet Margaret Thatcher in the new biopic The Iron Lady in her twilight years--long after her time as British prime minister, just another old lady buying milk. Confused and delusional, she sees (and converses with) her deceased husband, Dennis (Jim Broadbent); though still smart and perceptive, her sense of reality is a little hazy, and she finds her mind wandering into the past. "You can rewind it, but you can't change it," Dennis tells her.

Thatcher is played by Meryl Streep, and if the movie exists merely as a vehicle for yet another of her showcase roles, well, then, so be it. She is, no surprise, magnificent as the British conservative--her accent is sharp, her physicality is flawless, and she's equally convincing in middle and old age. She plays the political scenes with real bite; in the later sequences, she's playing old without "playing old" in any obvious way.

Abi Morgan's screenplay shuffles the past and the present in a fashion similar to Eastwood's J. Edgar, though with greater success. We meet Thatcher as a young woman (she's played, in those scenes, by the excellent Alexandra Roach), one who longs to make her life meaningful beyond being a wife and mother. "One's life must matter," she insists, and proceeds to make hers matter by ascending to the top of British politics.

The rise-to-power stuff is pretty standard biopic storytelling, though Morgan and director Phyllida Lloyd introduce some intriguing questions of obligation vs. ambition to complicate matters slightly. And its behind-the-curtain peek at the making of the prime minister is fascinating, particularly a funny, smart scene with her handlers, who zero in perceptively on exactly what they'll have to emphasize and de-emphasize to make her a viable candidate. (Good writing like that makes the indulgence of occasional hoary devices--like echoed, repeated dialogue on the soundtrack--somewhat more forgivable.)

There is something bothersome about the shallow way that the filmmakers regard the actual effects of Thatcher's controversial policies; there are lots of montages of unrest, of Thatcher sitting stoically in backseats as protestors scream at her, but it's a glancing analysis at best. That complaint registered, The Iron Lady is not a polemic, nor should it be. Regardless of how you feel about her politics--and this writer finds them mostly abhorrent--there is no denying that she is an arresting figure, or that hers is a compelling and dramatic story.

In that way, the film recalls the greatness of Stone's Nixon, another film about a divisive political figure, geared towards an audience that was (presumably) mostly unsympathetic. In The Iron Lady, there is a riveting scene where Thatcher turns abusive on a close advisor, and puts a chill over a cabinet meeting. After everyone leaves, Lloyd holds the camera on Street just a few moments longer, allowing the full complexity of her emotions to pass over her face, and then shows, in tight close-up, that her hands are shaking. That moment is the key to the whole picture. Flawed human beings are not just bad, and certainly not anything as dull and predetermined as evil. There are real people underneath, with emotions and motivations. The Iron Lady is, above all, a character study of a complicated woman--stubborn, headstrong, difficult, commanding, and ruthlessly intelligent. You don't have to admire her politically to find yourself sympathetic to her personally. Maybe it's more interesting if you don't.