Grave of the Fireflies (Remastered Edition) 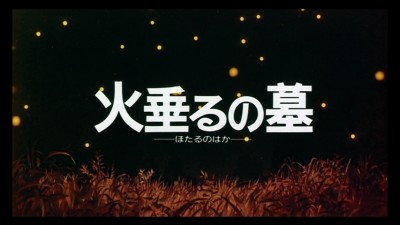 Grave of the Fireflies takes place during World War II. From the opening scene the audience is prepared for a difficult and unsettling drama. The story unfolds by introducing protagonist Seita, who is a 14 year old teenage boy. He passes away at the beginning of Grave of the Fireflies. From there on, the story is told in a past-tense, and it is about the struggles he had with his younger sister Setsuko as the pair tried to survive during difficult war-times alone. You will not leave the emotional experience of watching this story unfold with dry eyes. Grave of the Fireflies is one of the most moving and overwhelming war films ever made.

The film was written and directed by Studio Ghibli co-founder Isao Takahata. He's nowhere near as well-known as Hayao Miyazaki is in North America but that doesn't mean he isn't a brilliant storyteller with unique qualities. To even compare the two brilliant filmmakers can seem somewhat unfair as their styles and interests are more varied than some give them credit. Takahata's directing is always poetic and lyrical with a thoughtful introspection in each frame. Grave of the Fireflies is his greatest and most important masterpiece.

The animation is typical of Studio Ghibli. That is to say the artwork radiates with brilliance that is only seen through experiencing one of the studio's productions. Character designs are unforgettable and some of the most intricate and lush artwork you will ever see in animated cinema can be found here. The amount of detail is astonishing: the artwork indicates the time and place with remarkable clarity. You become transported to the landscape of Japan during WWII in the simultaneous beauty and terror of the times.

The filmmaking for Grave of the Fireflies is exquisite. The storytelling's emotionally involving and artistically profound. One of the main reasons the story works so well is also because of how relatable these characters are no matter who you are. The film is about more than one war and period of time. It is about the endurance of the human spirit during times of great difficulty. The characters can be related to and sympathized. They are trying to survive and one of the things that helps to keep them going is their strength in spirit and the love that unites family.  The story is as much about tragedy as it is the love of family and that is an important thematic aspect that can extend beyond all countries, continents, and languages. The message of love is universal. 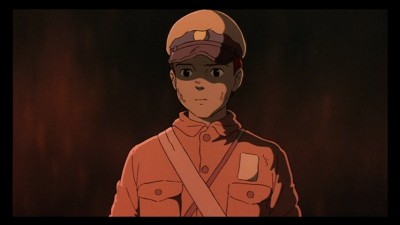 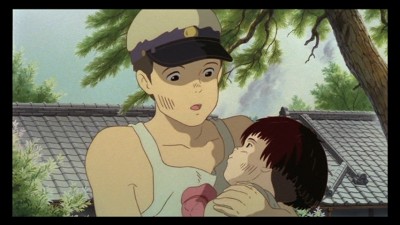 The word "classic" is overblown and overused (more-so now than ever). While I am not a history expert who can paint a portrait of how that word has been used over the course of time in painstaking detail I might as well wager a guess that the word "classic" (as defined by our current usage) was first used in 1597, the year believed to be the original time of publication of William Shakespeare's achievement Romeo and Juliet. But you know what... I'd be ridiculously incorrect!

So when should the word classic be used in writing? It should be used in reviews of Isao Takahata's masterpiece Grave of the Fireflies... because the film actually is the classic, masterpiece, and genuine work of art that deserves the use of the word and its core meaning. I'm not sure how anyone can experience the film without considering it a phenomenal accomplishment as one of the world's most moving wartime stories.  Too many films seem to try to "pull" at the heartstrings. This is one that actually plays them like a master violinist would. You will be deeply moved. 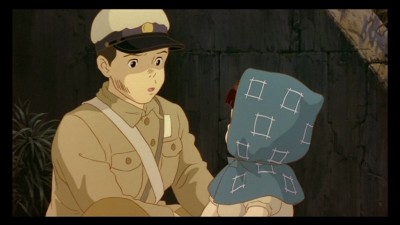 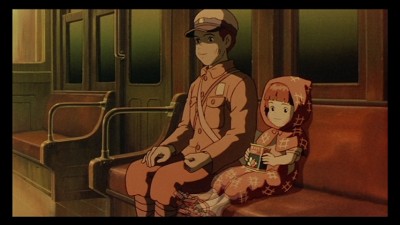 Sentai Filmworks has presented Grave of the Fireflies in a remastered presentation that preserves the original 1.85:1 theatrical presentation. It is a 16:9 anamorphic widescreen DVD release with slight window-boxing (minor black bars around the entire image). This is certainly a common aspect of some theatrical anime releases and it doesn't have a dramatic impact on the overall high quality of the presentation. This rerelease will make a solid addition to the DVD collection of any film fan who did not already own a prior release and it may even be worth a purchase as an upgrade. The transfer is relatively clean without distracting dirt and other print imperfections or damage. The color design isn't as vivid when compared to some of the other Studio Ghibli releases but this may be a result of the animation's artistic design.

Special Thanks to WTK (Anime Talk Contributor) for providing the comparison screenshots used in this review. 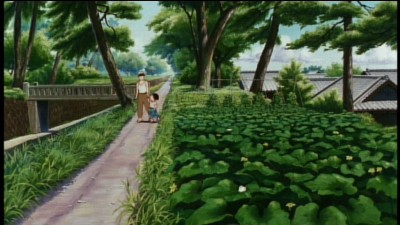 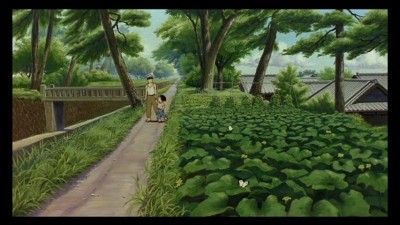 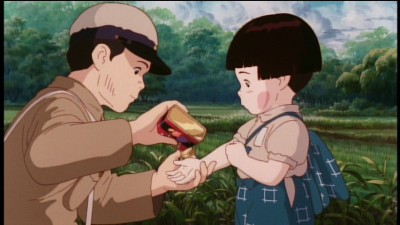 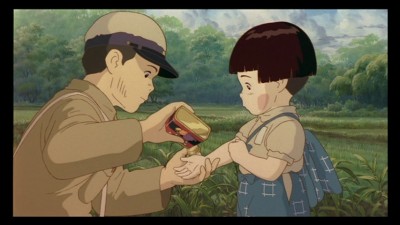 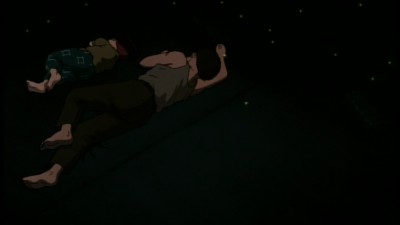 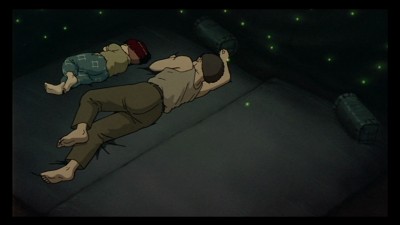 It appears as though the Sentai Filmworks DVD offers fans a significant upgrade in picture quality. Take note.

The film is presented with two Dolby Digital 2.0 options: the original Japanese language dub and the English language dub. Both sound impressive given the dated sound recordings and are more than adequate for viewing the film. The beautiful music score by Michio Mamiya is beautifully reproduced and the dialogue is reasonably crisp and easy enough to understand. The one main point I would like to make about the audio is to choose the dub option with a degree of care: the English dub is fine for what it is (if you insist upon it), but the Japanese language dub is much more powerful as an experience with remarkable voice-acting and a greater degree of depth.

Sentai Filmworks has included trailers for some of their other anime releases. No other bonus materials are included. 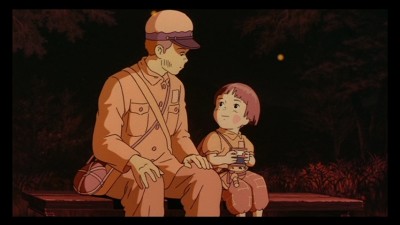 Grave of the Fireflies will always be one of my favorite films regardless of its genre or style. The film is emotionally resonant and engaging. This is a powerful portrait of the hardships faced by Japanese civilians during WWII and a story that is one part tragedy and one part dedication to the hearts of all who strive in times of hardship to survive with the love of a family member nearby. This is as much a story of trying to survive as it about family and love that lasts an eternity beyond our mortal years.