The decades-long glut of romantic films over saturating the market and genre seems to not only have a chilling effect on new romcoms that may actually be good, but in the few and far between case of romantic dramas, would seemingly make people skittish about checking them out until after the fact. Thankfully films such as Like Crazy help show us that romantic films can still be made and be appealing to watch.

Drake Doremus directs the follow-up to his 2009 film Spooner in a film he co-wrote with Ben York Jones. In it, Anna (Felicity Jones, The Tempest) is a student in Los Angeles and pursuing a career in journalism. She meets Jacob (Anton Yelchin, The Beaver), who designs and makes furniture. The two strike up a friendship that eventually becomes a relationship, which becomes complicated after Anna overstays her student visa and when she travels back into America, this infraction is cited as the reason she is sent back to England. We watch their relationship play out over the months and years (and miles) that follow. 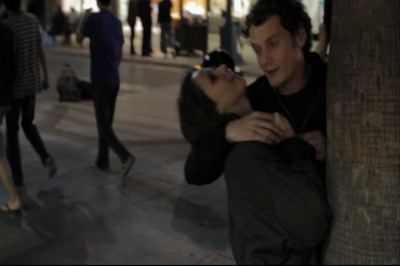 Doremus does a commendable job of capturing the film in handheld footage and at a distance to watch the characters develop the chemistry that is fascinating to follow on screen. Additionally virtually the entire first half of the film is devoted to watching them get more and more enamored with one another, giving a certain charm to the film. I will readily admit that I am in a relationship with my wife where we get along to the point that may bristle others or make them feel uncomfortable, but there is a kind of joy and treat in being each other's company that makes what Jones and Yelchin manage to conjure in the film very identifiable. There is an optimism that each finds in the other that perhaps they may not have been able to spot on their own.

The benefit of this being a drama is that there is less character manipulation than would occur in your stereotypical romantic comedy. There are some machinations that border on implausible for some people. The issue with the visa is somewhat of a convenient device, but when it comes to introducing conflict into the relationship, where else can you really go and still be believable? There are additional characters mixed into Anna and Jacob's lives as the two start relationships outside of the one with each other (including Jacob's girlfriend, played by Beaver co-star Jennifer Lawrence). You sense the struggle that those people have to try and stay in love with Anna and Jacob, despite the lingering feelings Anna and Jacob still have for each other, thousands of miles away. A scene when Yelchin's character tries to let Lawrence down easy stays mainly on her expression as her crumbling is heartbreaking to see. When you realize that between Lawrence and Yelchin that both are barely in their twenties (Yelchin at 22 is the older of the two), that further reinforces how impressive the performances are. Jones is the elder statesperson at 29 and does not look it at all, and Anna's persona is one that makes it all the more credible. 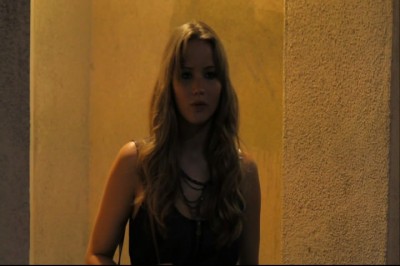 For every film made similar to Like Crazy, there are dozens of films that feature a combination of various more recognizable actors in equally vapid and hollow stories that are unsatisfying and from a writing perspective, almost incestuous nutria. Like Crazy is something that should be championed if nothing else for the differences from those films, as their result tends to be more emotionally resonating. Seek out this one.


Like Crazy is presented in 1.78:1 anamorphic widescreen by Paramount and looks solid throughout. The film's visual style (shooting almost entirely with handheld cameras) tends to keep the image as natural looking as possible, and in moments where the film includes soft yellow and greens, it looks clear and vivid without over saturation. The image lacks any noticeable edge enhancement or image haloing, with any flaws inherent in the source material and its filming. The film looks as good as it is.


The film's Dolby Digital 5.1 surround sound option is good, with the somewhat minimal soundtrack (combined with solid music choices). Dialogue tends to be slightly imbalanced at times, but thankfully the adjustment does not result in any jarring moments when the film cuts to perhaps a different much louder moment. Rear channels transmit a convincing later of sound that makes for a somewhat immersive experience, and the subwoofer is scarcely called upon to do work. It is decent listening material, but hardly anything to write home over.


The only extra to speak of is a commentary with Doremus, Editor Jonathan Alberts and Cinematographer John Gulesarian. The group discusses what it was like to work together and possess solid production recollection, though there was a bit of watching the film and some occasional silence. They discuss their thoughts on the cast and get into some minor shot and sequence breakdown, and touch upon deleted scenes (which are not included on the disc). It is a decent track though hardly memorable. The disc comes with a redeemable code for an Ultraviolet copy of the film for streaming to your (presumed) non-iTunes device of choice.


Like Crazy is filled to the brim with authentic feeling and emotional performances by its appealing young stars. The story is minimal though some of the choices tend to be distractions, but the chemistry and interactions of the performers help to forgive these sins. Technically it is a solid disc, but lacks a bit on the supplemental material. Strongly recommended for a different (and better) romance film that has come out in the last couple of years, with eyes on buying to those it hits a personal chord with.