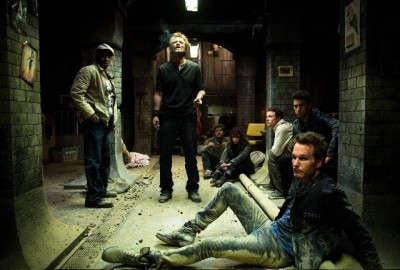 About midway through Xavier Gens's The Divide, there comes a scene where one character, bound to a wheelchair, is moved into a small room. The character who moves him has just helped cut off the bound gentleman's finger. He parks the wheelchair, squats in front of it, and defecates. "Now you don't have to be in here alone," he snorts--not even a good line--and slams the door behind him. Hey, look, it's only the second week of January, and we've already hit the cinematic low point of 2012.

There's more fun where that came from, though; Gens not only offers up that pleasant little encounter, but plentiful gore, a brutal rape, bodies chopped up with an axe, a character who menstruates graphically in front of several others, and more oozing sores than you can shake a stick at. It's all shot with a combination of lighting and filters that seem designed to make the noxious characters look as pasty and horrifying as possible. Oh, and they scream at each other for the majority of the picture's mercilessly overlong 110 minutes. The Divide is less a movie than a headache waiting to happen. It's a sour, glib mess, and the monotony is crippling.

The story: During a nuclear attack of New York, a handful of apartment dwellers shut themselves into the building's basement/fallout shelter, which the survivalist super (Michael Biehn) has stocked with water and canned goods. Everyone gets a stock character to play--the strong-willed heroine (Lauren German), the regular-guy-turned-short-fused-psycho (Milo Ventimiglia), the crying mother (Rosanna Arquette), the soulful, sensitive guy (Ashton Holmes), the weirdo (Michael Eklund), the French wuss (Ivan Gonzalez), and the black guy (Courtney B. Vance)--and as anyone who's read Lord of the Flies or seen Night of the Living Dead can tell you, that kind of close proximity and pressure-cooker atmosphere quickly turns everyone into frothing, screeching sociopaths.

There is something to be said for moderation. In real life, even under stress, people work their way up to losing their shit, but Karl Muller and Eron Sheean's script sets their characters off at the slightest provocation, and the cast bites into the scenery at every opportunity; there's little evidence that director Gens exerted any control whatsoever over his actors, who are allowed to snarl, shriek, and overact embarrassingly. There are a couple of exceptions; poor Courtney B. Vance, once one of our most promising actors, struggles to maintain his dignity (and nearly succeeds), while German's got a good, steely mug and even has the good sense to occasionally underplay. No one else comes off terribly well, though no one deserves the kind of debasing Arquette gets here (particularly no one who was in Desperately Seeking Susan or Pulp Fiction).

Gens's technical direction is obnoxiously overstylized--he's constantly throwing in snazzy lenses and Dutch angles and zipping his camera around on the floor like a second-tier Raimi, but his overstuffed aesthetics and hyper-caffeinated editing only serve to call attention to themselves, and his tacky 9/11 evocations are infuriating. There's no ambiguity to the picture; it's all surfaces, and ugly ones at that.

I'm hard pressed to recall a more thoroughly unpleasant film than The Divide--and yes, I know, there are plenty of great movies that are hard to sit through. But this is not one of them. There's not one redeeming factor to speak of, and only one good scene. It comes early, as Eklund uses an axe to chop up a body that must be disposed of. It's a turning point for the character, who punctuates each dull thud with a scream from his soul, and Gens's camera circles and studies the others, listening awkwardly in the next room. In that brief scene, the filmmaker captures the discomfort of a group of people experiencing something truly terrible. It's quite similar to the feeling you share with your fellow moviegoers while watching this film.