Golan-Globus, what more could one really say about the iconic 80s B-movie purveyors that hasn't already been said? While the duo were responsible for producing many memorable pieces of 80s schlock, Menahem Golan himself directed a few classics himself including "The Delta Force" and "Over the Top." However, before these two successes and the success of Golan-Globus' tenure at Cannon Films at large, Golan directed a relatively small 1981 film that launched a series of thematic sequels and the B-movie career of Sho Kusugi with "Enter the Ninja." 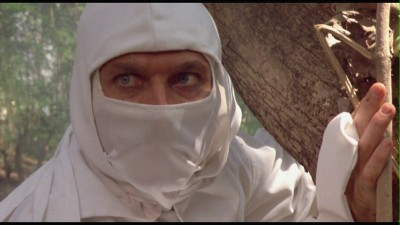 Those who know the name Sho Kosugi generally come to expect absurd but satisfying ninja action, but "Enter the Ninja" is not a Kosugi vehicle, instead it employs the efforts of Spaghetti Western icon Franco Nero as a mustachioed ninja named Cole who tears through a host of lesser foes in the film's medium-impact, dialogue free opening act. No better complement could be paid to "Enter the Ninja" than praise for its ability to keep viewers hooked with constant action punctuated by gratuitous violence and while there's no way it can go toe-to-toe in sheer spectacle against modern imitators like "Ninja Assassin," "Enter the Ninja" was fortunate to exist in an era where CGI wasn't in the lexicon and masked heroes and villains allowed for skilled martial artists and stuntmen to show off their art. Co-writer Mike Stone doubles under the mask for Nero, whose abilities in the film begin and end with his screen presence, leaving a thinly crafted story of industrial espionage and minor fist fights to keep the ship afloat until it's final act, that makes the opening seem like a casual warm-up. 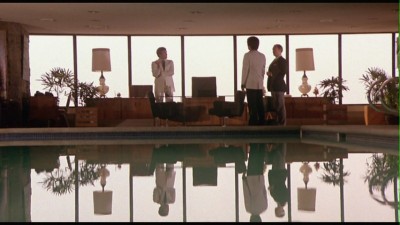 Susan George and Alex Courtney join Nero as an eventual damsel in distress and old war buddy respectively, while Christopher George chews the largest quantity of the picture's scenery as evil CEO (were there any other kind in the 80s?) Venarius whose strong tactics against Farmer Frank (Courtney) range from petty harassment to roughing up Frank's workers and eventually hiring an evil ninja, Hasegawa (Kosugi) who just happens to be Cole's arch-rival. Unlike numerous 70s and 80s low-budget auctioneers set in unnamed jungle locales, "Enter the Ninja" refuses to hide its Filipino filming origins and incorporates it as part of the plot, resulting in a (likely unintentional) meta commentary on Western exploitation of the island's people. Yet, no one picking up "Enter the Ninja" cares about subtext or even story in general, they want one thing and one thing only: ninjas. 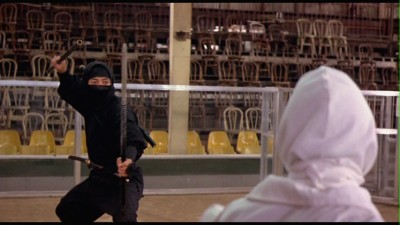 If it weren't for the first and third act, "Enter the Ninja" would have been long forgotten and what the film lacks for in general intrigue or believable performances, it makes up for in Cole killing hapless goons in every way imaginable, before only one foe remains: Hasegawa. Although their final battle is more build-up than fight, it's a genuinely gripping clash of rivals and Kosugi's short screen time fully justifies the launch of his B-movie career as a ninja that would continue as late as the previously mentioned "Ninja Assassin." Kosugi's efforts go beyond the job of villain and extend to fight choreographer, making the actor the biggest reason why "Enter the Ninja" succeeds as a film.


"Enter the Ninja" sports a shockingly crisp looking transfer for it's Golan-Globus origins and age, marking it one of the better efforts I've seen from MGM's Limited Edition manufactured-on-demand series. Featuring a 1.85:1 anamorphic widescreen transfer, "Enter the Ninja" is a relatively clean print, sporting a solid natural color palette that's a little bit less intense than the eye would expect. Detail is above average and compression artifacts are only a minor occurrence.


The Dolby Digital English 2.0 soundtrack is a little flat, featuring some high-end distortion common with many old B-movies and dialogue that sounds improperly balanced, although the latter may just be poor ADR.


The film's theatrical trailer is the lone extra.

"Enter the Ninja" is definitely 15-minutes longer than it should be, but most if not all is forgiven whenever the action takes center stage. A forgotten 80s B-movie classic, "Enter the Ninja" is a fine offering from MGM's Limited Edition collection and a necessary item in the library of any Golan-Globus aficionado. Recommended.