JB Smoove: That's How I Dooz It 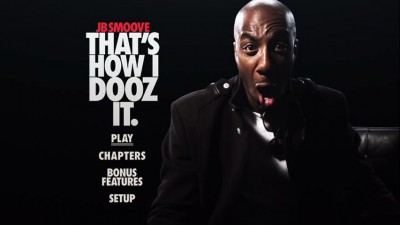 JB Smoove: That's How I Dooz It is the latest comedy special from the comedian/actor perhaps best known for portraying Leon Black on Curb Your Enthusiasm. On Larry David's show, he plays an abrasive, profane, opinionated force of nature. His on-stage persona as a stand-up comedian is pretty much the same thing. So, if you laugh at Smoove as Leon, then you're likely to have some interest in what the real JB has to say.

Smoove's breathless style relies heavily on crowd work, physical demonstrations, and repetition. Topics range from techniques in the bedroom to running from the police to cooking chicken. His bits rely less on traditional joke structure. There aren't a lot of punchlines, per se, the delivery is more important than what is delivered. He picks an angle on a subject and works it, hammering on each point hard. He rarely stops talking, except to maybe laugh at his own antics, and he never stops moving. The microphone and a tall metal chair work as props for his stories, sometimes in tandem. He'll use the chair as both someone he's inflicting violence on or a woman he's having sex with, and he'll bang the mic' on it to emphasize the action he's pantomiming. It's loud and it's relentless and it's maybe more admirable for the energy on display than it is actually funny.

Then again, comedy is subjective, and I'm pretty sure JB Smoove: That's How I Dooz It just isn't my style. I gravitate to stand-up that is more observational, personal, and revelatory; Smoove's act is more about familiarity and exaggeration. His set, after all, opens with him doing different dance routines to his theme and closes with him running around the stage pretending to be King Kong, the microphone tied around his waist so that it hangs between his legs. His delivery is spirited, but there's not much else to it. He doesn't really say anything surprising or insightful about whatever he's chosen to tackle, he just describes the scenario, going over and over it until he's pushed it as far as it can go. I was amused by what he was doing, but in terms of what he was saying, I mostly couldn't relate, and so I didn't laugh.

I guess for me I just like JB Smoove the actor more than I do JB Smoove the comic. I enjoy him on screen whenever I see him in a film. I just reviewed The Sitter, which was really bad, but he was really great as the menacing drug dealer Julio (a role he references playing in That's How I Dooz It). His screen presence and his general manner is genuinely funny; his writing, however, not so much. 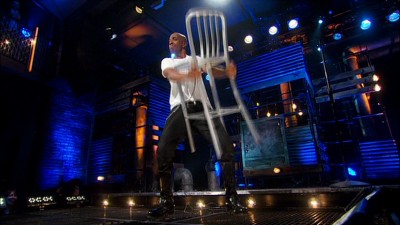 Video:
The widescreen image on That's How I Dooz It is adequate. The resolution isn't very sharp, and the overall look of the image is soft, but there is a decent amount of visible detail and the rawness serves to preserve the live experience.

Sound:
The 2.0 sound mix is, not surprisingly, mostly loaded into the center channel. A fancier mix could maybe have given the feeling of being in the club, with the crowd noise moving all around, but it's not really necessary. What's important is that we can hear the performer, and that is definitely the case with this kind of set-up.

There are English subtitles for the deaf and hearing impaired.

Extras:
"Behind the Smoove" is a short (4 minutes, 36 seconds) backstage promo, with Smoove talking about his show and looking over the stage before the performance.

"Dooz and Doozn'ts" is a collection of quick "advice"-type clips (2 minutes, 41 seconds).

FINAL THOUGHTS:
Rent It. JB Smoove: That's How I Dooz It definitely lives up to its title. We see Smoove doing his thing, exactly as he intends to do it, and without ever pausing to apologize. It didn't strike my funnybone, but I think that's just a stylistic dissonance more than a fault of the comedian. Your mileage may vary. 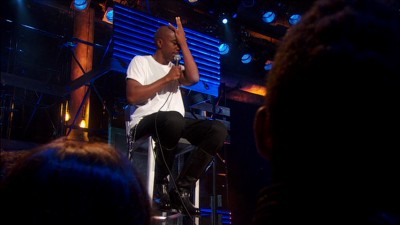