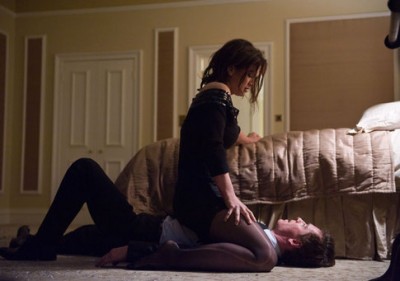 So turns out, Steven Soderbergh's bone-cracking action movie isn't nearly the aberration you might've anticipated. The film, Haywire, is a fast-paced spy movie in which mixed martial arts star Gina Carano beats her way through a rather distinguished cast of supporting players--and it is, at first, a bit jarring to see the Oscar-winning filmmaker indulging an audience's appetite for ass-kicking and glass-smashing. But once the initial shock has worn off, his familiar interests and stylistic devices begin to surface, as well as his continuing (and welcome) insistence on bringing new life and energy to wheezy old tropes. The genre gives the filmmaker a new jolt of energy; he, in return, gives it a crackling intelligence.

The screenplay is by Lem Dobbs, who also wrote Soderbergh's masterful (and sadly underseen) The Limey. In that collaboration, the duo took a dull old chestnut of a story--the one-time man of action, seeking out revenge--and invested it with a new, experimental spirit, as well as an altogether unexpected sense of existential angst. They're up to something similar here; though the story has been done, it's seldom been done with this kind of fast, sharp wit.

The picture opens in a diner in upstate New York. Mallory Kane (Carano) is met by Aaron (Channing Tatum), who appears to be a former associate of some kind; as in The Limey, Dobbs adopts a shoot-first, ask-questions-later narrative approach, tossing out names (Paul, Kenneth) and places (Dublin, Barcelona) in their first conversation, letting us figure out later how they all add up. Before there's time for any real exposition, Aaron throws his coffee into Mallory's face and proceeds to beat the hell out of her. Soderbergh is playing with our expectations in this raw, intensely physical encounter; we're not used to seeing that kind of violence against a woman, and then he turns that expectation again, because we're not used to seeing a woman fight back as coldly and expertly as this one does.

She escapes, grabbing a good Samaritan (Michael Angarano, from Red State) and his car. As they escape, she tells her story, seen in flashbacks with her new charge serving as a wry audience surrogate. Come to find out, she's a government contractor-for-hire ("Wow, that's real?" he asks), on the run after a complex series of jobs and double-crosses. She's trying to find out how she got set up to take the fall, and to eliminate whomever is responspible.

Again, nothing too new in this story. What's unique is the style with which it is told. Soderbergh's filmmaking has become so compact, so efficient; in audience-pleasing entertainments like this and last year's Contagion, he's delivering the thrills and tension that we're there for, but also indulging his own taste for the slightly askew approach. He likes to scramble things up--he'll intercut several simultaneous scenes to jazz up what could easily be deathly dull exposition, he'll stage a daring hostage rescue and turn the entire soundtrack over to Dave Holmes's pop-tart score, he'll give us a long warm-up to a foot chase simply because it's so much fun to watch the way his leading lady moves. The trailers for Haywire may make it look like a Van Damme movie with a shot of estrogen, but this is the closest thing Soderbergh has made to an Ocean's movie since that series concluded; it shares those films' musical voice, their sleekness, their sense of tactile pleasure.

That said, when it comes to those atypical action scenes, he makes some laudable choices. He eschews the ear-blowing scoring, handheld camerawork, and over-caffeinated cutting that have all but taken over action cinema these days, going instead with long takes and wide shots that really let us see what Carano can do, and playing the scenes in a near-silence that borders on reverential. This isn't a movie star playing at a skill; this is an athlete, and the filmmaker takes what she does seriously. As a result, he captures some of the finest fight scenes in recent memory, including a hotel room encounter with Michael Fassbender that is simply, for lack of a better word, awesome.

Carano is not an actor by trade, and some of her line readings are, it must be noted, a little flat. But she's got cool charisma down pat, and does she ever bring it in those action scenes. What's more, Soderbergh is using her much as he used adult star Sasha Grey in 2009's The Girlfriend Experience; he's capturing an essence, of Sex with Grey, of Power with Carano. She's not indestructible--she bruises, she struggles, she takes the occasional nasty spill. But she is a badass, and we don't question, for a second, her ability to do every single spectacular thing she does here.

Soderbergh surrounds her with a respectable cast, and all of them get good moments (particularly Michael Douglas, who does droll about as well as anybody in the business). But it's Carano's show--and Soderbergh's. Haywire runs a lean 90 or so minutes, and delivers the kind of crisp, thrilling action its audience will desire. But, as is Soderbergh's gift, it does so within a framework of genuine giddiness and film smarts. Haywire is a high-spirited, smashing good time.