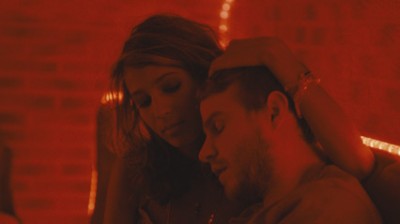 Maybe the problem is the title. Simon Killer is a picture that leaves moviegoers adrift for longer than most will tolerate, telling its story with a style and pace that could most kindly be called deliberate. It unfolds in a series of languid scenes, most of them shot in single, unbroken takes; it's dialogue is quiet and conversational; the plotting seems improvised. We meet Simon (Brady Corbet) soon after his arrival in Paris. "Your mother said you were having a hard time," says the cousin he's staying with, and that's true; he recently broke up with his girlfriend of five years. "The last time we saw each other, you frightened me," she writes to him in an email. You start to see what she means.

On the surface, eh seems like a nice enough guy--brainy, handsome, a little withdrawn. He strikes out with a couple of pretty French girls, and we feel bad for him. Slowly, though, things surface. He's clearly a liar, and a casual one, the kind who will lie when the truth would do just fine. His motives are murky; when he takes up with a prostitute, Victoria (Mati Diop), we're not sure what his endgame is, and even when it reveals itself, it sure seems poorly worked out. There's something off about Simon, and we wait for it to reveal itself.

If my thoughts on Simon Killer seem overly fixated on audience reaction, it's unavoidable--I watched a good quarter of the Sundance audience bolt from the film before its conclusion, and to be sure, no one would mistake it for a picture that's intended as a crowd-pleaser. Some of that may have been discomfort with the subject matter; writer/director Antonio Campos uses the seediness of the setting and the situations to make us uneasy, and the frequent, graphic sexuality will probably turn off more viewers than it will turn on (some of it, in all fairness, seems designed purely to shock). And some of the withdrawals may have been borne of simple impatience--as noted, the tempo asks a bit of indulgence from its viewers.

It's not a boring film, though. The music (often used, via iPod, to put us into the title character's head) is unsettling, and those long takes are rather intoxicating, Campos and cinematographer Joe Anderson first using them to lull us into passivity, then to heighten our awareness--we find ourselves on guard, peering into those well-composed frames. The pictures aren't always pretty, but they're spiky and vivid; watch the way the frame pans across the room from Simon to Victoria with the laziness of an oscillating security camera, or how the crawl of a pan late in the film is used to work up a healthy dose of dread.

When the violence finally pops, it has been coiled for so long that it lands with a wallop--even in its (mercifully) abbreviated time onscreen. But Campos really wreaks havoc after that, by finally cutting with in a scene; the edit is as forceful and jarring as the violence that preceded it. It's a virtuoso stretch of filmmaking.

Whether that masterful closing section warrants the occasionally stagnant and ponderous stretches that lead up to it is a question whose answer this viewer still hasn't worked through. Simon Killer has mood to burn, a fascinating visual strategy, and subtle performances (particularly by the two leads, who all but disappear into the scenery, so natural and unaffected is their work). As a formalist exercise, it is utterly absorbing. Narratively, I'm not so sure.