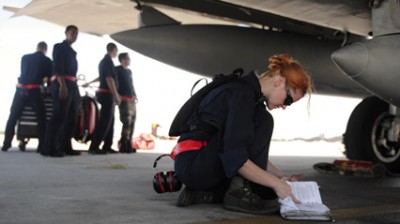 The first on-screen text in Kirby Dick's The Invisible War informs us that all of the film's statistics come from government sources. They are, to put it mildly, shocking. Over 20% of female vets have been sexually assaulted while serving our country. 200,000 assaults and rapes had been reported by 1991--and that was twenty years ago, and that only counts how many were reported. Fifteen percent of incoming Navy recruits entered the service with a previous history of sexual assault or rape; that's twice the rate as among civilian population. It is an environment, Dick contends, that can attract a sexual predator--and that is set up to not only excuse the perpetrator, but to punish the victim. Most of the latter are discharged; most of the former are not. The Department of Defense knows it is a problem, and makes bold statements about "zero tolerance" policies. But nothing changes.

Dick is a bit of a bomb-tosser, and is thus the ideal filmmaker to tell this story--he's a director who's good at getting his audience in a lather, whether over the hypocrisy of the movie ratings system (This Film is Not Yet Rated) or closeted gay politicians (Outrage). Here, he assembles face after face, woman after woman (and a few men, too) to tell story after story of rape, ostracizing, and injustice. Dozens of veterans are featured, from all branches of the armed services, each story more harrowing than the last. They were harassed, they were stalked, they were assaulted, they were raped, they were ignored. Many were expected to report the crimes to the men who perpetrated them. More than one woman was charged with adultery--since the perpetrator was a married man. For raising objections, for reporting the crimes, for seeking justice, they were dismissed from service. Most struggle to this day with PTSD, depression, and shame.

There is a history of this sort of thing, of course: the 1991 Navy Tailhook scandal, in which female recruits were forced to run a "gauntlet" that amounted to a gang rape; the 1996 accusations of 30 women at the Army Aberdeen Proving Ground; the 142 allegations over a decade at the Air Force Academy in Colorado Springs, which finally surfaced in 2003. After each, pronouncements were made and "prevention programs" were implemented (Dick shows the laughable posters and training videos), but the crimes continued, as close to the Congressional investigations as a mile away, at Washington's Marine Barracks.

The personal stories are powerful. Lt. Elle Helmer, USMC, talks about her 2006 rape, where NCIS closed the investigation after three days, and then her own commander charged her with "conduct unbecoming." Michael Matthews, U.S. Air Force, talks about the humiliation of his rape in the hands of two fellow recruits, which he kept a secret for decades. The case of Kori Cioca, U.S. Coast Guard, provides something of a story spine for the documentary; she was first assaulted and then raped by a superior officer, and she has run into miles of red tape for her VA claim to treat the jaw that he dislocated.

There is more, sadly, much more--the suicide attempts, the dishonorable discharges, the dismissed lawsuits, the stooges who defend the half-assed sensitivity training and the current system's method of leaving all investigations at the discretion of the commanding officer. Dick puts it all together, and seems as astonished as his audience. The Invisible War is impeccably assembled, gathering force as the stories and arguments are collected into an indictment of a broken, victimizing entity. This bitter, powerful film is a howl of anger and a cry of injustice.