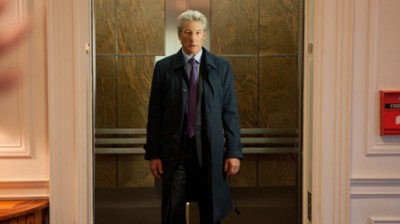 If there were ever a role that Richard Gere was born to play, Robert Miller, the high-profile financial whiz at the center of Nicholas Jarecki's sleek pop thriller Arbitrage, may very well be it. Miller seems to have the world on a string; the picture begins with a warm family scene, his supportive wife (Susan Sarandon), successful children, and glowing grandkids gathered at their gorgeous Manhattan apartment for his 60th birthday. He blows out the candles (with the help of the little ones) and gives an adoring speech about how lucky he is to have a family such as this. And then he slips out of the apartment to go fuck his French artist mistress (Laetitia Costa). That's not the only lie he's got going; he's also holding a huge loan to bolster his company's books, in order to pass the audit required for a huge buyout that will make him even richer.

Gere can do this kind of thing--the smooth, fast-talking, confident and handsome weasel--in his sleep, but this is not to imply that he sleepwalks through Arbitrage. What he does instead is bring his (and our) familiarity with this type to the character, and then squeezes it. Early on, he makes a dire mistake, one that puts everything in his life (his marriage, his business, his day-to-day existence) in danger. It's the kind of moment that an actor can't duck out of, as he is hit with the anguish and fear of realizing that everything has spun far, far out of control. Gere goes for broke here, and Jarecki lets him unleash the raw emotion and scary power of the scene.

The film's primary preoccupation is whether Gere/Miller will get away with... well, any number of things. That path brings up questions of audience sympathy--even with an actor as charismatic as Gere in the role, are we hoping for a clean getaway? And if not, what is our rooting interest in the film? It's a notion that too often clouds our critical thinking; Miller is an antihero, and our outrage at his breaches (particularly in this 99-vs-1 percent atmosphere) are tempered, at least a bit, by our fascination at his indulgences. "I have responsibilities," goes his catch-all excuse. "People rely on me." This guy really thinks that he can get away with this stuff--and there are plenty of precedents that would lead him to that conclusion.

Arbitrage's success is as a character study--and as a showcase for not only Gere's wily, biting work, but for a cast loaded with terrific character actors. Chris Eigeman, Bruce Altman, and Stuart Margolin all turn up, the later in a deliciously tart performance as Miller's seen-it-all attorney (their crackerjack "hypothetical" conversation about his crime is the best dialogue scene in the movie). Tim Roth appears to be having a ball in the picture's Columbo role--he gets a giant laugh with his delivery of, swear to God, the line "Oh. Okay"--though his New Yawk accent is less than persuasive. Sarandon doesn't get much to do until the end, but when her chance comes, she leaps all over it.

Beyond the performances, though, Arbitrage is fairly weak sauce--it moves fast and it's fun to watch, but it's junk food, a cinematic beach read. Several of the dialogue scenes sound an awful lot like things we've heard before (the "you're never going to leave her" scene with his mistress leaps to mind), and the little third act bows that Jarecki ties the story up with are a smidge too clean. But he's an efficient filmmaker, and his terse sense of pace, along with the urgent score (by Cliff Martinez, of course), creates a palpable sense of the walls closing in on his protagonist. The picture's a mite too smooth and polished, but there's a messiness to Gere's performance that lingers past the end credits.