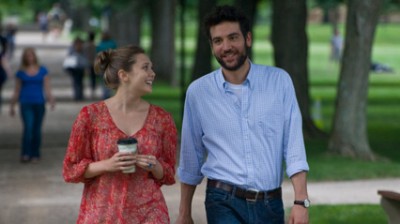 Liberal Arts is a really nice movie. This is the kind of statement that's often thrown around pejoratively, or at the very least condescendingly--a pat on the movie's head, if you will. But I'm merely trying to share the reserved but genuine warmth I felt towards the picture at its end; it's not without its flaws, but it's so very likable that you can't get too worked up over them. It's the second feature for How I Met Your Mother star Josh Radnor, whose Happythankyoumoreplease had some of the same issues. They're as negligible here as they were there.

Radnor stars as Jesse, a mildly unhappy admissions officer for an unnamed university (presumably NYU). He's just ended a relationship and is feeling particularly aimless--and thus prone to the bouts of nostalgia brought on by a visit to his alma matter to honor his favorite professor (Richard Jenkins) on the eve of his retirement. While there, he meets an adorable coed, adorably nicknamed Zibby and adorably played by Elizabeth Olsen. By the time he heads out of town, she's done the next best thing to wearing an "I HAVE A CRUSH ON YOU" T-shirt: she's burned him a CD.

These early scenes are just a scotch underwritten; though there are laughs here and there (Jesse tells Zibby he was an English major, but with a History minor, "just to make sure I was fully unemployable"), some of the dialogue feels like placeholders for forthcoming lines that would be funnier or more perceptive. Radnor's screenplay picks up, oddly enough, in what would seem its most ridiculous section, wherein Jesse and Zibby connect over music (her CD is filled with classical and opera music from a survey course that "changed her life"), their responses and growing affection shared in handwritten letters.

Look, I get it. This flowery bonding business should be intolerable (it certainly sounds so, yes?), but Radnor's delicate style and utter lack of cynicism ultimately win you over. This shouldn't work, but it does. Soon, the letters have moved from waxing ecstatic over Beethoven to outright flirtation, leading to one of the picture's best scenes, in which Jesse gets out a pad and pen and literally does the math. He's 35 to her 19, so when he was 16, she was... three. But when he's 87, she'll be... 71? The way in which Radnor works it through, using only his hands and his face, is priceless.

You really can't blame him for at least entertaining the notion; Olsen is utterly charming and just astonishingly pretty--nice racket, Radnor, writing movies where Elizabeth Olsen falls for you--and she shows fine range from her justly acclaimed (but obviously quite different) work in Martha Marcy May Marlene. She gets to display a bouncy comic spark (I like the way she prompts him to "say yes" whenever she propositions him), and she breaks your heart in her later scenes.

Radnor mostly plays straight man, though he gets off a couple of good lines. Alison Janney barely speaks in half of her scenes, yet basically steals the picture; she's so good, she makes even weakest lines zing, and her last scene is utterly perfect (until Radnor lets it run on just a beat too long). An unbilled Zac Efron does a decent job channeling Pitt in True Romance, and though Elizabeth Reaser is underused (and part of an alarmingly predictable third-act turn), her presence is welcome. However, I'm no fan of Richard Jenkins's new career as the dramatic drag on light rom-coms; his mid-life crisis here isn't quite the distraction as his Alzheimer's in Friends with Benefits, but it's no better use of such a fine actor.

As with his first film, Radnor's made his screenplay overly busy--there's a couple of subplots too many, and thus an excess of loose ends to tie up at the end. But there's much to recommend here: Radnor and Olsen's swoony chemistry, Seamus Tierney's sublime cinematography, and a surprisingly astute and sharp-edged (particularly in a film festival atmosphere) bit of business about cultural snobbery and the freedom to like "things that make you happy." That scene makes sense in the context of the movie, though it now seems like a fail-safe, inserted for the Sundance audience. And Radnor's right: there's nothing wrong with liking a nice movie that makes you happy. Liberal Arts is a sweet flick with a few laughs and a little bit of truth. That's less common than you'd think.