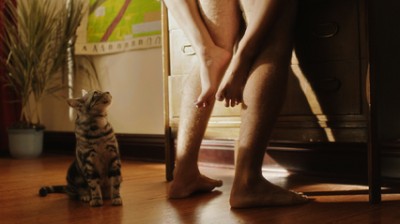 Alison Brie co-stars on Community, the funniest show on network television. Lizzy Caplan and Martin Starr were on Party Down, no slouch in the laughs department itself; she also appeared in Hot Tub Time Machine, while he's a member of the Apatow stock company. These are crackerjack comic actors, is the point, which leaves one wondering why director Michael Mohan would hire so many funny people and then trap them in a stillborn melodrama like Save the Date.

The movie opens with a credit sequence featuring pencil drawings of the characters, scored to Wilco on vinyl. Hipster cred--check! Brie and Caplan play sisters: Sarah (Caplan) is a commitment-phobe who's just managed to talk herself into moving in with boyfriend Kevin (Geoffrey Arend), while Beth (Brie) is engaged to Kevin's band mate Andrew (Starr), and can't understand what the hell her sister is so afraid of. Kevin badly miscalculates Sarah's longevity with an unfortunately public marriage proposal; their relationship implodes immediately, and Sarah moves on to Jonathan (Mark Webber), a rebound dude with long-term potential. Can she get over her fear of commitment? Can she trust herself to fall in love? Are these questions we've maybe heard in movies a time or two before?

But the problem is not one of familiar material; with a fresh coat of paint, you can make any old story new again. However, that refurbishing requires either perception or wit, and Save the Date is short on both. It's not just the situations that are conventional--long stretches of dialogue sound like reheated leftovers, without the little spin that's required when reanimating tropes this wilted. Many scenes have no zing at all, the dialogue just over the wrong side of the precipice between "naturalism" and "dreariness."

Caplan is warm and winning, even when her character is utterly infuriating. But try is she might, she can't overcome Mohan's fundamental miscalculation: we're most interested in Brie and Starr than Caplan and Arend (or Webber). Their interplay is charming, and both actors (particularly the arid-dry Starr) can make damn near any half-amusing bit of dialogue into a laugh line. Unfortunately, Mohan (and co-writers Jeffrey Brown and Egan Reich) seldom give them even that. A moment of gravity in a light picture can be a very powerful thing, and if the failed proposal (which pushes past the easy laugh and into the real anguish) or Starr's quietly powerful speech setting Brie straight (which feels ripped from his kind soul) were dropped into a romantic comedy, they'd pack a real punch. Here, not so much.

There are a few other scenes that work--Caplan and Webber have a love scene that's both sexy and amusing (a rarity, that), and there's a couple of chuckles to be found in a bar encounter between Brie, Caplan, and the negligently underused Melonie Diaz. Maybe it's just a matter of expectation; perhaps if Save the Date were cast with unknowns, or actors without such well-documented comic chops, its creaky dramatics and pessimistic worldview wouldn't have come as such a surprise. As it is, though, it plays like a missed opportunity.