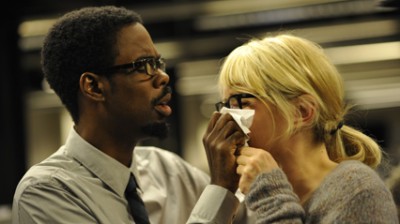 Julie Delpy's 2 Days in Paris was one of the nicest cinematic surprises of 2007, a film that sounded like either a) a vanity piece, or b) a JV retread of her Before Sunset/Sunrise pictures, but turned out to be c) an astonishingly assured romantic comedy with a sharp edge and some real depth. That element of surprise is no longer in play with her sequel, 2 Days in New York; she now has the opposite problem, of meeting expectations, which the new picture does not, not quite. But in all fairness, she set a pretty high bar the last time around, and this giddy follow-up offers numerous pleasures of its own.

A few years have passed since the last film, and protagonist Marion (Delpy) is no longer with Paris beau Jack. They share custody of a child, though, and Marion is now living in Gotham with Mingus (Chris Rock), a writer and radio host with a daughter of his own. Their little model of domestic bliss is disrupted by the arrival of her father Jeannot (Albert Delpy, the writer/director/star's real-life dad) and sister Rose (Alexia Landeau), along with an unexpected tag-along, Rose's sometime-boyfriend--and Marion's ex--Manu (Alexandre Nahon). All are in town for photographer Marion's big gallery opening, where she is also selling her soul to the highest bidder--as a "conceptual art piece."

Mr. Delpy and Landeau are both holdovers from the Paris film (Mrs. Delpy is, alas, no longer with us), with Landeau also credited (along with Nohan) as a co-writer. Their script is snappy and boisterous, and further hones Delpy's on-screen persona as a female Woody Allen: neurotic, bespectacled, and hilarious. There are worse artists to emulate. She's not a show-off, but she writes herself a few great scenes--I'm thinking particularly of an encounter with an art critic that's a little masterpiece of self-destruction. There's dimension to the performance; near the end of the film, she has a wonderful moment assuring Rock that "I'm not a psycho bitch, sweetie," and the way she delivers that line, though tears and sincerity, is as funny as it is despairing.

She's good with the rest of her cast as well. There are flashes of the awkward self-consciousness that tends to creep into Rock's acting work, but it's mostly a successful performance, and he delivers his laugh lines with a satisfying zip. As in the first film, Mr. Delpy is a comic dynamo, while Landeau beautifully captures the essence of a maddening know-it-all who does it all under the guise of trying to help. All of the characterizations, in fact, are sharp and well-defined. Delpy's direction is direct and uncluttered, though she's savvy with a jump-cut (the technique is particularly well-used in Rock's imagined conversations with an Obama cut-out) and crafts a stylish if brief sequence at the Greenwich Village Halloween parade, followed by perhaps the perfect cinematic deployment of Vincent Gallo.

Scenes fall flat, here and there, and Delpy could stand to vary the volume a bit; the constant Gallic bickering becomes a bit reiteratively manic by the second hour. Still, there's a lot to like about 2 Days in New York, and if it doesn't reach the heights of its predecessor, it's still very good to hear Delpy's enchanting comic voice again.