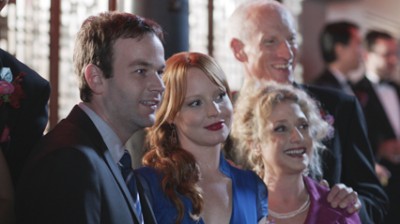 A disclaimer: I am the target audience for Sleepwalk With Me. I heard Mike Birbiglia's original sleepwalking story when it aired on This American Life, which I listen to faithfully every week. I saw him perform Sleepwalk With Me (and its follow-up, My Girlfriend's Boyfriend) in New York. I read the Sleepwalk With Me book. Frankly, I've become so familiar with this material that I was a bit hesitant about this new film adaptation of it; how far was he gonna stretch this stuff? But from the opening frames of the movie (which marks Birbiglia's filmmaking debut), in which the comedian addresses the camera, instructing us to turn off our cell phones because they're starting the movie, which is a true story ("I always have to tell people that"), I was in, all the way. Sleepwalk With Me is wonderful.

With those straight-to-camera monologues and its somewhat scrambled storytelling style, it's not a stretch to compare Sleepwalk to Annie Hall-era Woody Allen; here's another comic-turned-filmmaker ingeniously using the form to tell a very personal story. But this is an honorable comparison. Birbiglia isn't some Woody imitator of the Ed Burns school--he's got a distinctive style, and warm affability that even Mr. Allen seldom put across.

He plays Matt, a barely-veiled version of himself, a struggling stand-up comic and long-time boyfriend to Abby (Lauren Ambrose). Abby's great--she's beautiful, she's sexy, she's bright, she's supportive, she's independent. There's just no good reason why Matt hasn't gotten around to marrying her, but he sure hasn't, and he's running out of excuses. He also can't make himself get to the doctor to investigate the weird disorder that's causing sleepwalking incidents which are growing progressively more dangerous. He dreams that a laundry hamper is a jackal; he wakes up kicking the hamper. He dreams that he's won first place in the Dustbuster Olympics; he wakes up when he falls off a bookshelf, where he's been perched with the TiVo. That kinda thing. Abby keeps telling him to see a specialist. He'll get to it.

It's hard to make time when his career finally starts to come together. As a film about a comedian, Sleepwalk couldn't be better timed, as WTF with Marc Maron (who appears, briefly and memorably, as stand-up "Marc Mulharen") and other comedy-centered podcasts and websites have made the grind of the business a hot topic. The "inside comedy" angle is well-used by Birbiglia, part of the texture (scenes are shot at Brooklyn's Union Hall; his character hangs out and shoots the shit with contemporaries like Jesse Klein and Wyatt Cenac) but not exclusionary. We get that he knows this world, understands it. In the early scenes, for example, he grasps that material is often not the problem with inexperienced comics; he doesn't do what a less knowledgeable movie like Punchline does, having a character go up and basically do knock-knock jokes. When a comic isn't making it work, it's often a question of confidence.

That confidence appears to have migrated to Birbiglia the filmmaker--he's joked on Twitter about not knowing what the hell he was doing during the production, but you can't tell from the smooth, trim picture he's come up with. His style, much like Allen's, is direct; he's most interested in photographing the dialogue and moving the narrative. But he's got a couple of very clever gimmicks up his sleeve, and the stylized dream sequences give him the opportunity to flex a bit visually.

As an actor, he's a touch limited, with a few scenes where his comic deadpan is just dead. But he coaxes marvelously witty performances out of his cast (Ambrose is particularly wonderful), and his delivery of the final big speech, about why he and Abby stayed together, is just lovely. Sleepwalk with Me is more than a film of a monologue; it is, as the opening credits inform us, a film made "in association with WBEZ Chicago's This American Life" (host Ira Glass co-wrote and co-produces), and it shares that program's best qualities. It is moody, it is thoughtful, and it's funny--very, very funny. This is one of the best films I've seen at Sundance.