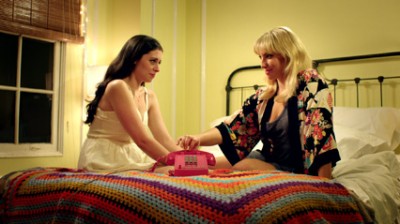 The takeaway lesson of last summer's Bridesmaids--that female-driven comedies can be dirty too, and profitable to boot--is one that was heard loud and clear in Hollywood board rooms and executive offices, and as sure as the day is long, we're in for a steady stream of poorly-made scatological lady comedies. It's the inevitable law of diminishing returns; don't forget that There's Something About Mary and American Pie begat Tomcats. Thankfully, the girl-heavy indie phone sex comedy For a Good Time, Call... is not the female Tomcats. It's not Bridesmaids, either. But it's a cute and likable picture with its own rambunctious charm.

Lauren Miller (who co-wrote with Katie Anne Naylon) plays Lauren, an uptight yuppie who, in the film's first scene, is hit with a brutal (and brutally funny) break-up by her snitty boyfriend. Katie (Ari Graynor) is a hyper-employed party girl who is about to lose her perfect apartment. Lauren needs somewhere to live and Katie needs a roommate, so their mutual friend Jesse (Justin Long, basically reprising his character from Zack & Miri) puts them together. They met previously in college, and did not hit it off, but it's in their best interests to get over all of that--particularly when Lauren loses her job.

One night, Lauren overhears some particularly dirty pillow talk coming from Katie's room. Surprisingly, her roommate is all alone. That's when the truth comes out: one of Katie's many jobs is as a phone sex operator. When she tells Lauren how it works, Lauren can't believe how badly Katie's getting ripped off. She comes up with a proposition: Katie should go into business for herself. Lauren will do the business side. A partnership is born.

As one would expect from a phone-sex comedy, there's an abundance of cheap, smutty laughs. But director Jamie Travis, for most of the film, gets the tone just right--the attitude is bouncy rather than seedy, and though things occasionally heat up, the outlook is fundamentally sweet and sunny. The leads help; Miller and Graynor are genuinely great together, equally convincing as frenemies and BFFs.

The primary gift of Miller and Naylon's screenplay is their multi-tiered characterizations; there is more to each woman than we initially anticipate, and the writers (and actors) have a good time playing with those expectations. Miller is an engaging lead, with an absorbing arc nicely played. And this is a certifiable movie-star performance by Ari Graynor; she's got a sharp, fizzy onscreen personality that works in this role like a charm.

Some of Travis's set pieces aren't as precise as they should be, and the cameos by Seth Rogen, Kevin Smith, and Ken Marino as phone-sex clients are more distracting than funny. Things get awfully formulaic in the third act, particularly with the inevitable (but still draggy) fight and break-up; it is tough indeed to make the transition from dildo jokes to teary-eyed, sad-piano-music-scored serious business. One comes away from For A Good Time, Call... wishing that the filmmakers would have taken a few more risks, or found somewhere more interesting for the story to go. Still, it's tough to complain too much about as giddy and good-natured a sex comedy as this one.