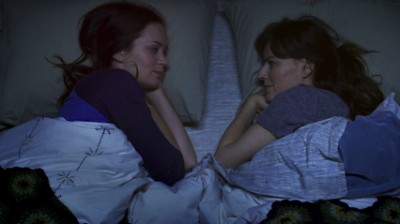 The friends have gathered because it's been a year since Tom's death. Al (Mike Birbiglia) gets up to say a few words about what a great guy Tom was, so kind, so thoughtful, so remarkable. From across the room, Tom's brother Jack (Mark Duplass) objects. You guys didn't know him when he was younger, Jack says. He was a bully, an asshole, and if we're going to talk about him, let's acknowledge "the full man." He raises his glass, and leaves.

This scene, which opens Lynn Shelton's Your Sister's Sister, is about as keenly-observed a dramatization of genuine social discomfort as you're likely to see in a film. It's one of several moments that have an almost documentary-styled naturalism; Shelton writes a specific kind of witty, conversational dialogue--casual, overheard, and funny. (We can presume from the "creative consultant" credit given to the film's four speaking actors that a fair amount of it is improvised as well.)

Another, more sustained scene of dialogue perfection comes a bit later. Iris (Emily Blunt), who was Tom's girlfriend (for a time, at least) and is now Jack's best friend, sends him up to her family's island cabin to clear his head. When he arrives, he is surprised to find Iris's sister Hanna (Rosemarie DeWitt) there--she has just broken up with her girlfriend of several years. That night, depressed, she breaks out a bottle of tequila, and as the pair drink and chat, the picture absolutely nails the rhythms and one-upsmanship of late-night drunken conversation: how confessions are made, how everything is "awesome" and the prefix "super" is freely applied, and how observations can turn to flirtation. And then, when one of them makes a maybe-casual proposition, Shelton perfectly captures how two people in that situation will spend a bit of time talking each other into it, and then out of it, and then back again.

Where that goes, and what happens after, I will not reveal. Suffice it to say that Your Sister's Sister is an uncommonly smart and complicated romantic comedy, one that gets the laugh but doesn't look away from the fallout. Its three primary performers (Birbiglia's appearance is unfortunately brief) are nicely mixed: Blunt wields ace comic timing, Dewitt a disarming sense of bemusement, and Duplass (a filmmaker and sometimes actor) an amusing paranoid streak.

Their arcs, and the screenplay's delicate threads, come together with a scene that compacts several big reveals, unwrapped with the skill of a great screwball comedy. But, again, Shelton burrows deeper--she gets the laughs, but then digs out the real emotional stuff that opens up in their wake. The montage sequence that follows is a bit of a cop-out (for a film that so heavily emphasizes dialogue, we don't hear a lot of stuff that we should), but Duplass's final speech has a raw honesty and directness and that is utterly disarming. Your Sister's Sister is a film that could have easily fallen into sitcom traps and broad, grotesque fraudulence. Instead, it is a delightful, brainy treat.