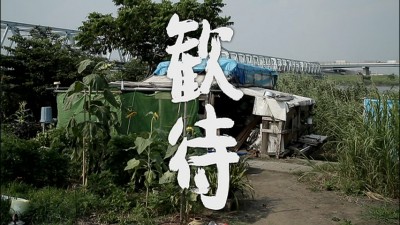 Hospitalité is a difficult film to try and describe because of how unusual the whole movie is: part black comedy, part humanist drama, and part introspective zinger about the failings of people at times, Hospitalité is unlike anything else that I have reviewed over the past several months. The film is humorous, but never in a way that makes it seem like a laugh-out-loud experience. This film is sometimes dramatic at the core when you don't expect it to be, and it manages to bring immigration issues facing Japan into the spotlight as a main element of the story. Hospitalité brings amazing storytelling to the screen in this acclaimed independent Japanese production brought to cinematic life by writer-director Koji Fukada.

The story begins with a missing bird, one of great important to the family's young daughter. Wanting to please the child, the father and mother begin a search campaign to then find the missing bird and this is where the strange events begin to unfold.

Mikio Kobayashi (Kanji Furutachi) is the father of the daughter and he's no longer with the woman who he had the daughter with, who ran out on him (but of course we only learn this information over the course of the story's progression - at first we think that the wife passed away because of what Mikio says on that subject). This is one house full of misleading words.

Mikio is now married to a much younger wife, Natsuki (Kiki Sugino), and the surprising thing is both of them get along reasonably well but don't seem to feel any more serious connection. This seems to appear obvious to the stranger who is soon to meet them and who approaches them as the son of the businessman who decided to invest in Mikio's operations. At first, it appears the stranger is only there to inform them that he believes he spotted the missing bird, but before a full day has gone by the offbeat Kagawa (Kanji Furudachi) decides to ask for a job and for a room to stay in at the house and business. Surprisingly, Mikio is quick to oblige. Before long, Kagawa invites his "wife" (who isn't actually his wife) into living with them, and by the end there's an entire household of foreigners staying there with them. Things escalate into an odd home-life rather quickly. 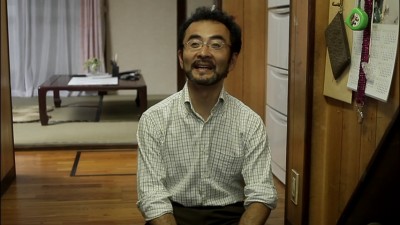 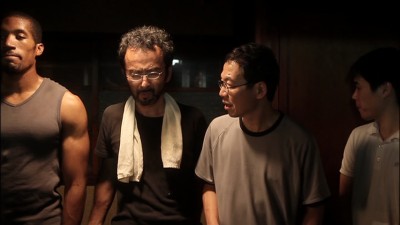 One of the things that impressed me the most about the film is how its writer-director managed to bring out intelligent performances from all of the actors. Each performer excelled in bringing depth to these quietly damaged individuals.  You can recognize that this story is trying to share an important message about rediscovery and through the kindness we share with others. By the family letting in these strangers they were given a chance to reconnect with each other and with themselves too. They met some additional roadblocks along the way, but there was a light at the end of the tunnel for the couple who inhabits this most hospitable house. Kanji Furudachi was especially memorable as the offbeat stranger who places the family on a decidedly odd path.

These central characters witness the happiness of people who are strangers to them and strangers to the country of Japan. It's all similar to the immigration issues facing America: those who are in support of anyone that wants to live a life in the country they admire most and those people who fervently oppose a higher number of foreigners entering a country, even in pursuit of an admirable dream for a better tomorrow.

On the surface, Hospitalité is a story about a family running a printing press while trying to juggle their day-to-day lives and it's about the strange encounters they experience over the course of the film. Digging deeper into the film proves rewarding by unraveling a humane element about the lack of genuine fairness to immigrants wanting to live in Japan, and the exploration of a family that is on a troubled wavelength that needs to be fixed.

Hospitalité has a conclusion that is at least moderately hopeful despite a solemn and sad ending. The couple could recover. They just have to pick up the pieces. Hospitalité is ultimately about a strained relationship that needs mending and a group of immigrants who befriend a household in the strangest of ways. That's my take on it, anyway. Fukada has crafted a beautiful and solemnly sad story worthy of exploration and admiration. 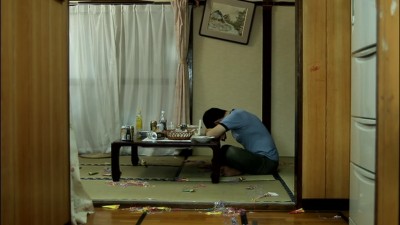 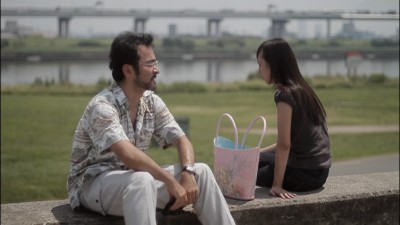 Hospitalité arrives on DVD in a 1:85:1 framed transfer which preserves the original theatrical aspect ratio. The transfer is a bit uneven: some moments are a tad soft and others are grainy because of the source material. The print quality itself is likely as good as the film elements would allow because of the independent, low-budget production aspects.

While it never manages to be a perfect looking presentation is watchable and enjoyable as a viewing experience. The colors never quite "pop" (even for DVD) but are appropriate as a subdued cinematography seems to be something that fits with the film's storytelling style.

Hospitalité is presented in Japanese with English subtitles.

The sound quality isn't anything special: this is just a 2.0 Dolby Digital presentation, and one that is without much to do to make it stand out from the crowd. The dialogue is clear and clean sounding and is easy to understand and enjoy. This is a quiet movie that doesn't have any need for a big sound design. Given the low-budget nature of the production the lack of dynamic audio doesn't surprise much.

Supplements on this release include: short biographies on cast members, trailers for other film movement releases, and the Monthly Short Film. Each month Film Movements present a new short film to accompany a feature-length film release. This month's short film entry is Miyuki (from director Will McCord).

It' a story about a Japanese girl who moved to America, has an obnoxious roommate, and who attempts to seek out friends in New York City but only finds herself meeting perverts who are looking for sex. Of course, she did place a Casual Encounters advertisement and that was the springboard for the weird encounters. She was hoping to make some friends this way but her limited English didn't help her to understand.  The language barrier led to a cross-cultural scenario gone-wrong. Original, dcomedic, and well-acted: Miyuki actually makes a nice companion to Hospitalité even though these efforts are not directly related. 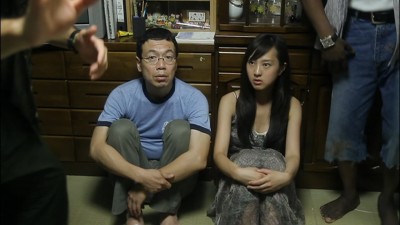 One watches the storyline unfold with an offbeat rhythm that never does cease to end until the final moments. Hospitalité is an unusual film (to say the least). It's quirky, comedic, sad, and dramatic. These elements often occur all at once. I'm not always used to experiencing a story told in such an unusual way, but here is an example of a recent film that managed to pull that task off well. It's worth a look for any fans of Japanese independent cinema with its story of damaged and mending relationships and immigration issues relevant to Japan today.