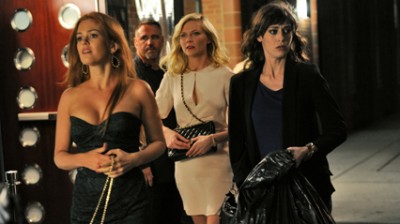 If a single critic reviews Leslye Headland's Bachelorette and doesn't mention Bridesmaids, I'll eat my hat. The filmmakers probably won't mind the comparisons--after all, that wedding party comedy's monster grosses got this one the greenlight, and quick. It doesn't have that film's warmth or sweetness; this is a sharper, spikier comedy, where the laughs have a darker, murkier undertow. It will certainly not have the kind of wide appeal that Bridesmaids did. It feels more like that picture's scrappier, foul-mouthed little sister. Some will like that idea very much. You know who you are.

The central ensemble is comprised of three high school friends: type-A Regan (Kirsten Dunst), party girl Gena (Lizzy Caplan), and bubble-headed Katie (Isla Fisher). They're among the bridal party of their fourth wheel, Becky (Rebel Wilson, the creepy roommate from Bridesmaids), who was, well, not supposed to be the first one wed. They try to throw together a bachelorette party for the night before the nuptials, but it's a bust; the trio sits around after everyone goes to bed, snorting coke and complaining, which is all well and good until they go and rip Becky's dress. Panic sets in, and the three smashed and unhinged women set out into the night to try to make their wrong right.

The accident itself rings false (nothing in the rest of the film indicates that Regan would act as she does in that scene), but it's a good motor to get the picture going, and writer/director Headland's comic timing is crisp; she moves briskly from scene to scene, getting the laughs and moving on, letting the one-liners and asides build organically. Too many modern comedies seem to work from the punch line backwards, but Headland has the ticking clock of the morning wedding to keep the narrative focused and the pacing tight.

She's also got the right chemistry going in the cast. Dunst has the most prickly character to play, and to her credit, she doesn't try to soften Regan or make her "likable"; she gets her laughs by pushing her snide superiority to its limit. Caplan's easy-going cool-girl charisma helps her cloak Gena's rough edges, though she, too, doesn't shy away from her character's considerable flaws. But the picture's dynamo is Fisher, who is not only irresistibly sexy, but displays the kind of buoyant comic energy that made her so memorable in Wedding Crashers (and which she's seldom had the opportunity to show off since). This is just a funny performance, full of perfect little moments, none of which can be described here in a manner that would do them any degree of justice. Suffice it to say there's seldom been a bit of throwaway food comedy as purely uproarious as Fisher shoveling cake into her mouth while confessing her feelings to a potential beau.

There are juicy supporting roles for male actors too; the always-welcome Adam Scott inserts a shot of dirtball into his persona, to great effect, while James Marsden tries out the charming scumbag role and finds it a good fit. Hayes McArthur and Kyle Bornheimer provide an unexpected Perfect Couples reunion (your author was a fan, and refuses to apologize for it), the former playing the groom with pure joy and enthusiasm, the latter proving an effective foil for Fischer.

A few early reviews have complained about the picture's shift into slightly more serious waters in its third act, but it's actually a fairly logical progression for Headland--she spends the first hour enjoying the trio's hedonism, but then goes deeper, peering deep at what kind of women they really are, and what their behavior actually tells us about them. Scott gets the most pointed line in the film, when he looks right at Caplan and tells her the truth: "It's not cute anymore." That's not a line you'd hear in, say, a Hangover movie, but it's the key to this one. A line like that is what makes Bachelorette a more thoughtful and penetrating movie than you might expect. But there's plenty of cum jokes too, if that's more your thing.